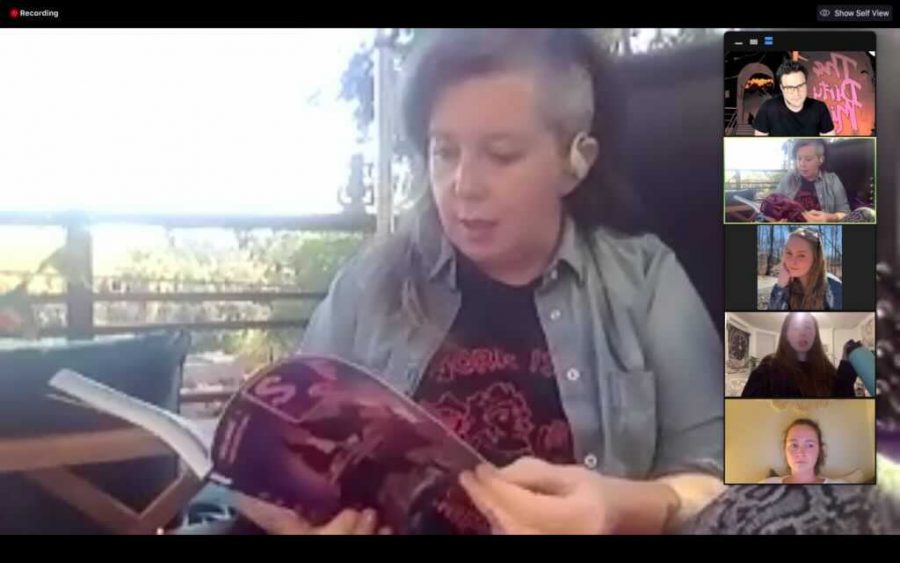 Not every apocalypse comes “Mad Max” style, with a hot dude on a movie screen driving out across a wasted desert to kick butt. According to Tina Horn, author of the graphic novel “SFSX (Safe Sex),” that “straight white guy” portrayal has played out for too long.

Horn spoke to Pitt students about her book at a Zoom event Monday. PJ Patella-Rey, a visiting lecturer in the gender, sexuality and women’s studies department, invited her to speak after teaching the graphic novel in his Introduction to Gender, Sexuality and Women’s Studies courses.

“SFSX”, published in its entirety in July, takes place in a post-apocalyptic San Francisco, where the governing party is a kind of quasi-religious group aiming to control the general population’s sexual habits and force sex workers into even further obscurity.

The book’s main protagonist, a former sex worker named Avory who worked at a club called The Dirty Mind, finds her way back to her former coworkers when her husband is captured for violating chaste sex laws. She spends much of the book working her way back into the group, especially since the club has gone underground to escape persecution.

Horn said she wanted to write a genre-fiction story where sex workers aren’t relegated to the background, while at the same time introducing readers to the vernacular of sex workers, who she said have reclaimed the words often thrown at them in insult.

“I wanted to write an action-adventure story where sex workers were the heroes,” Horn said. “And to sort of reclaim pejorative language, like to sort of have like whores, perverts, queers and sluts to have them all being the heroes.”

Patella-Rey said he teaches “SFSX” in Introduction to Gender, Sexuality and Women’s Studies in part because of how Horn treats the characters as multifaceted people who are more than just flat characters.

“When there are sex-working characters, they tend to be very stereotyped, very flat characters,” he said. “Yes they’re sex workers, but there are also multidimensional characters who have friendships and have relationships and have different personalities from one another.”

But “SFSX” explores more than the inner conflicts of its characters — it takes place over the backdrop of an apocalyptic America. Horn said having this larger conflict in the background of her story allowed her to emphasize the conflicts brewing within the sex work community as a comparison.

“When there’s so much infighting among the underclass that they’re too burnt out to actually stand up for what they believe in,” she said, “[or] stand up to the people that are actually creating the circumstances that are producing these conflicts in the first place.”

According to Horn, the post-apocalyptic, science fiction and fantasy genres have long left people of color, members of the LGBTQ+ community and anyone outside of the “traditional” heterosexuality and gender binary in the dust. She said these books and movies rarely mention sex workers outside of objectification or as background characters.

Horn said many of the narratives in the genre follow a similar pattern — one of the people in power, afraid of losing their power — and she wanted to tell a story about individuals who have never known that fear.

Patella-Rey said when sex workers have the oppurtunity to tell their own story, it starts a cycle of reclaiming their lives after they’ve been negatively portrayed in media.

“Because when sex workers write and tell their own stories, they tend to do so with a level of nuance and understanding and three-dimensionality that’s often lacking in other people’s portrayals of sex work,” he said.

Horn has worked in the sex industry herself, and has even gone on to consult for “Pose,” the award-winning FX show about the African-American and Latinx drag-ballroom scene in 1980s New York.

Horn said “Pose,” which stars transgender and LGBTQ+ actors, has an extra level of authenticity because it employs members of those communities, as well as sex workers, to consult behind the scenes. She said “Pose” allows viewers to see an authentic portrayal of that life and time period.

“Because [director Ryan Murphy] gave [transgender writer] Janet Mock more opportunities and more power and creative control over the second season, I think that translates better into your experience as a viewer watching it when there’s so much cultural specificity, even in the music,” she said.

Horn recognized that she has the privilege to talk about her sex work openly and use it to further portray sex workers in positive light. She said she hopes “SFSX” is one of the many stepping stones that helps other sex workers into the media and film industry, where they can tell their own stories uninhibited.

“My hope is that people, like me, can set a precedent so that when people who come into the industry who are more marginalized than me it will seem like a positive thing,” she said. “In terms of what they can contribute to the media industry.”