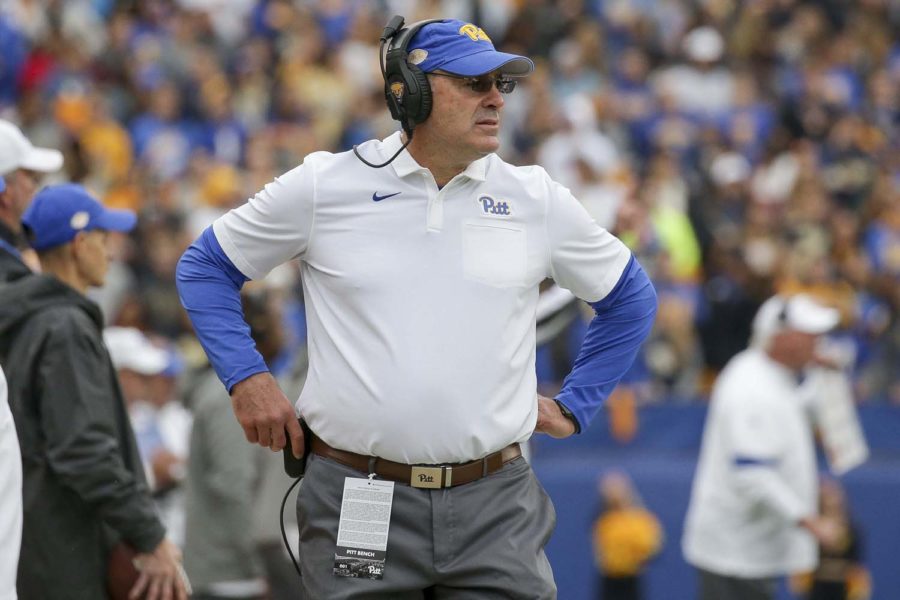 The Panthers will play the Yellow Jackets in Atlanta at 7 p.m. on the ACC Network Saturday.

Pitt football faced a variety of concerns going into the Florida State game last week but emerged victorious from a team effort with senior quarterback Kenny Pickett back in the fold and younger players stepping up. Pitt head coach Pat Narduzzi couldn’t help but express his pride in the team on Monday, after the Panthers came back from a 14-3 first-quarter deficit.
“Great team victory for our kids,” Narduzzi said. “Just proud of the way they came out of that first quarter when things didn’t look as good and they were persistent on what they came down and traveled to Tallahassee to do.”

Although the Panthers stomped out their opponent on Saturday with a clean offensive performance, mistakes and costly penalties stayed on the team’s mind this week. Redshirt freshman Brandon Hill threw the football into the stands after scoring an interception return touchdown, resulting in a taunting penalty after his first career pick.

“I was just happy with the details. Still not as happy with some of the after-the-whistle penalties that we had, whether it was a late hit on a quarterback or a celebration or taunting,” Narduzzi said. “Some of those will drive me nuts and we’ll try to tie that up this week.”

A surprise came on gameday when Pickett entered the lineup. His presence and experience helped guide an offense that faltered in his absence under redshirt freshman backup quarterback Joey Yellen. Narduzzi emphasized Pickett’s time with the team as the key to the offense’s rejuvenation.

“Well, I think naturally everybody has a little bit more confidence in the guy that’s done it for all those reps we just talked about, the million reps,” Narduzzi said. “So there’s obviously the confidence part. But there’s also the execution part that’s huge, and it’s different when you’ve been — that quarterback spot back there.”

Saturday’s roster featured some young, fresh faces in the secondary due to the opt-out of redshirt junior defensive back Paris Ford last week and senior defensive back Jason Pinnock’s one-game suspension. Narduzzi had plenty of names on his mind who will get opportunities on Pitt’s defense in the future.

“Deandre Jules is getting snaps at D-end. Haba Baldonado, you saw him come out — I think he missed a sack one time, and he’s probably not 100%,” Narduzzi said. “Tyler Bentley continues to improve, but Tyler Bentley didn’t play Saturday. David Green hobbled out there — he hasn’t been healthy.”

“You know, [Davis’] motor. I talk about effort all the time, attitude and effort, toughness,” Narduzzi said. “He’s tough. He’s got everything you want in a linebacker.”
The challenge for the Panthers now comes in replicating their success against the Seminoles. They’ll face Georgia Tech on the road this week, another team who’s struggled this year. The Yellow Jackets have the same record as Florida State but have spaced some tough competition so far. Three of its five losses have come against ranked opponents, but a 73-7 loss to Clemson didn’t show too much promise.

First-year quarterback Jeff Sims leads the Yellow Jackets offense. He’s thrown for 1,346 yards in his rookie season, adding 277 yards and four touchdowns on the ground. Georgia Tech head coach Geoff Collins has focused on turning its defense into a formidable force, but the team has plenty of work to do. The defense impressed in its season-opening win against Florida State but has given up more than 30 points in five of its last six games.

“They’ve got a young football player in Jeff Sims that’s athletic. He’s a freshman from Jacksonville, Florida, that we recruited a year ago, so we know who he is,” Narduzzi said. “He’s got a great arm. “And then defensively, again, Geoff Collins is a defensive guy and they play hard on defense. They’re sound, and they make plays.”

The Panthers and Yellow Jackets square off in Atlanta at 7 p.m. on the ACC Network Saturday, Pitt’s first night game of the season. If the team can come away with another road win, the Panthers will have a winning record again, heading into tougher matchups against Virginia Tech and Clemson to close the regular season.