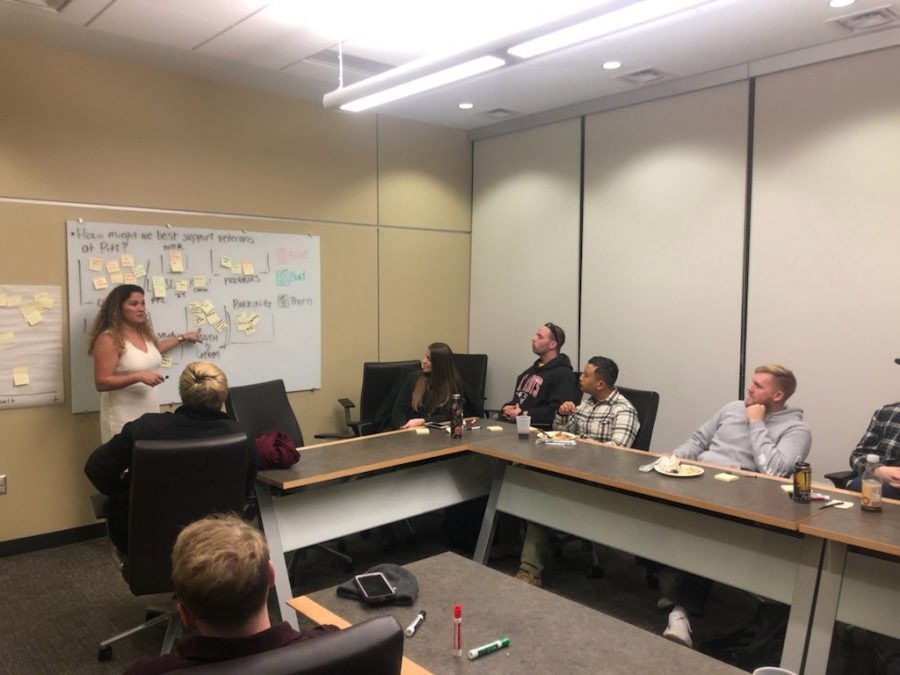 Aryanna Berringer, director of the Office of Veterans Services, works with a “Master the University” class last year.

Eric Sutley did not plan on attending college after he returned from military service in eastern Afghanistan. But after visiting a friend in Pittsburgh and falling in love with Pitt, his plans quickly changed. Now having almost completed his education at the University, Sutley credits the Office of Veterans Services with his success.

“I can easily say that OVS is one of the main reasons why I’ve had such great success at Pitt,” Sutley, a senior administration of justice major, said. “They do not receive nearly as much credit as they deserve.”

Sutley said the office has worked hard to answer every question he and other students have had. He said he found its assistance particularly helpful throughout this year, especially with the uncertainty and various changes in VA benefits due to the COVID-19 pandemic. Since the beginning of the pandemic, the VA and Congress have worked to preserve GI Bill benefits and make special rulings depending on changes at universities, such as a switch to virtual classes or a change in grading policies. GI Bill benefits have been available to veterans since 1944, and the most recent program under the GI Bill umbrella is the Post-9/11 GI Bill — also known as Chapter 33. It provides education benefits to veterans who served after Sept. 10, 2001. Post-9/11 GI Bill benefits also apply to these veterans’ spouses and dependents.

According to Steve Hernandez, the benefits coordinator for OVS, Congress passed a law just two weeks ago declaring that online courses are equivalent to “in-residence” courses in terms of pay rates through December 2021.

The OVS team’s primary responsibility is to provide resources and support to veterans as they navigate life at Pitt after returning from military service. This involves developing programming, building relationships with students and ensuring that veterans and their family members receive all of the benefits that they qualify for during their time at the University.

Hernandez said for his office, this fall semester has been more challenging than previous years.

“Honestly, I think most students would say the benefits and payments at Pitt have been largely unchanged from their perspective,” Hernandez said. “From the perspective of the administrators, however, this year has been brutal.”

Hernandez explained his team, like other Pitt administrative departments, has had to completely rethink its procedures this semester with the switch to all-virtual operations.
“Like every other faculty and staff office, we’ve had to reinvent procedures and find reservoirs of energy to translate into endurance and flexibility,” Hernandez said. “Same holds true for the students, too, so we’re all in the same boat.”

According to Brett Foley, the OVS program coordinator, there are various types of VA benefits, and the most common is the Post-9/11 GI Bill. The U.S. Department of Veterans Affairs lists Post-9/11 benefits as payments for tuition and fees, housing and books and supplies for a maximum of 36 months after completion of service.

While Sutley is a veteran and receives Post-9/11 benefits payments due to his time in the service, he is one of the few recipients of Pitt GI Bill benefits to do so. According to Hernandez, approximately 60% of recipients at the University are not veterans, but dependents — the “civilian” family members of a service member or veteran.

Hernandez said Pitt typically has about 500 students per year who use such benefits, but this year there are approximately 395 students.

According to Foley, these students have not experienced lapses in their benefits and payments thanks to efforts from the VA and constant communication from the OVS. Though he said there were three major concerns at the beginning of the pandemic.
“Back in March/April, there were concerns about how students’ housing allowances would be affected by a switch to online class, how satisfactory/no credit grades would affect benefits and how to assist Reservist/National Guard students who may be deployed in COVID relief efforts,” Foley said.
Previously, students on campus received more financial assistance for housing compared to students taking online classes. This is due to the fact that the Monthly Housing Allowance is calculated based on the zip code of the campus, whereas the MHA for online students is a set rate. But Foley said recently passed laws protect housing rates for students switching to online courses due to the pandemic.
Overall, Foley said the office has not seen any major impact on Pitt students’ benefits and payments due to the VA adapting to the changing and individual student situations as well as keeping schools informed of any benefit policy changes.
While Foley brought attention to the efforts of the VA, Sutley stressed just how helpful the OVS team has been this year.

“Aryanna, Brett and Steve really take the time to talk to you as an individual, not just another student vet,” Sutley said. “They have been in constant communication with us about how things are/were changing for GI benefits.”

This communication takes place in the form of calls, emails and Zoom office hours, according to Foley and Hernandez. Hernandez said the Zoom office hours take place three days a week in an attempt to provide the same opportunity for connection that the office’s open-door policy usually fostered.

“We’ve made ourselves available though Zoom, but it’s not the same. It’s not intimate and it’s not always available,” Hernandez said. “I know I have had less students contact me as compared to previous years, and this is what keeps me awake at night.”

He stressed that students are missing out on mental and behavioral health support the most during these virtual meetings. While students used to be able to come into the office to talk about their benefits or frustration over certain class projects, the conversations often eventually turned to more personal topics like hobbies, career aspirations and stories about military service.
“Those conversations were our gateway to a deeper dialogue if a student happened to be going through real behavioral health issues,” Hernandez said. “We’re all facing ‘unknown unknowns’ right now, and I wish I had a better solution.”

He also said as his office attempts to meet the challenges of a pandemic-affected semester, it has received help from various employees throughout the University. People like Michaela Englert from student accounting and billing, Marvin Wynn in IT client services and the people at student appeals work behind the scenes to support the OVS team and all students, according to Hernandez. He said these people make the “impossible” happen.

“There are some real unsung heroes out there, and no one will ever know their name,” Hernandez said. “Every battle is decided by the unsung heroes and those are our unsung heroes — exemplars of the quiet, dedicated professional.”

For the time being, the OVS team continues to communicate about potential benefits changes and assist students in any way they can. Sutley expects coronavirus-related changes to happen next semester as well, but said he encourages all students to look for the positives in the current situation.

“I believe the best thing we can do, not only as veteran students but traditional students as well, is to remain flexible and adapt to the situation. We can’t sit back and feel sorry for ourselves about the unfortunate situation we find ourselves in,” Sutley said. “We have to stay resilient and look for the positives that have come out of this pandemic.”