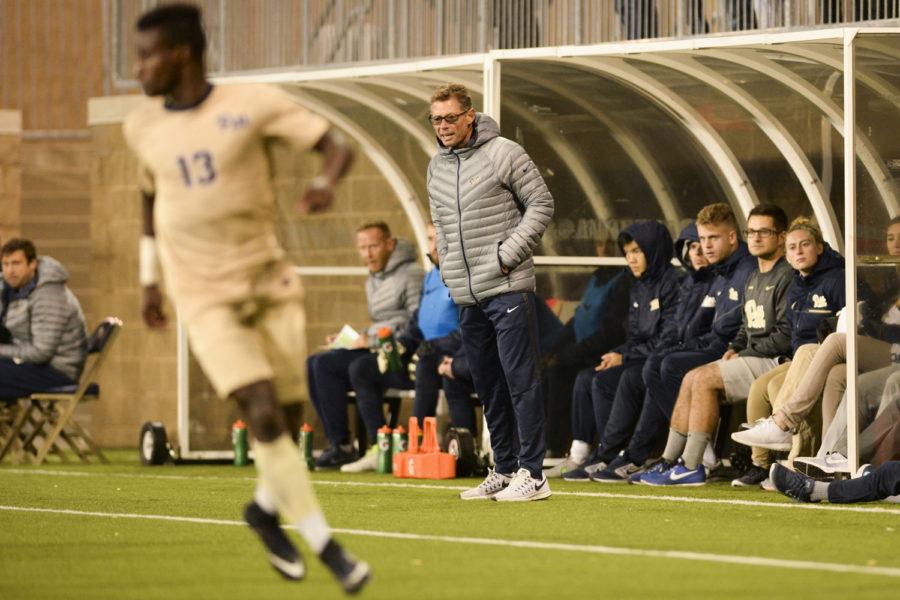 While the No. 1 Pitt Panthers men’s soccer program enters the ACC tournament as the top-seeded team in the field, the team faces a far-from-easy championship path.

The ACC has emerged as the top men’s soccer conference nationally, and it boasts many of the top programs in the country. It’s no coincidence that the top five teams in the United Soccer Coaches poll all hail from the ACC.

While the ACC played an abbreviated 2020 men’s soccer season, and many programs have opted not to play fall sports, the ACC has powered through the pandemic, with eight quality teams reaching the tournament stage of their season.

It didn’t happen without a few mishaps. Many teams postponed early-season games as programs struggled to keep their players healthy. Pitt avoided any issues in the first half of the schedule, but the Panthers’ season hit a roadblock on Oct. 28, when the program announced it would cancel its two remaining matchups with Syracuse and Notre Dame after pausing all team activities “due to COVID-19 related protocols.”

While Pitt now has an opportunity to resume its season, the Panthers could look rusty out of the gates. The momentum they built from five straight victories may not carry through three weeks without competition.

Despite the fact that Pitt cancelled its final two games of the season, the team has maintained its top national ranking to this point, and its undefeated record and high-powered offense provide clear reasons as to why.

In just five games, Pitt led the ACC in several offensive categories –– assists (20) and goals per game (3.4). The Panthers also finished with just one goal less than Wake Forest, which led the conference with 18. Pitt sophomore attacking midfielder Valentin Noel tied for second in the conference with five goals, while senior fullback Jasper Loeffelsend and first-year forward Bertin Jacquesson tied each other for the conference lead with five assists apiece.

Pitt has prided itself on sharp build-up play and aggressive counterattacks, leading to the team possessing arguably the most dynamic offense in the tournament field. This doesn’t make them the clear-cut favorite, however.

Wake Forest has established itself as one of the premier men’s soccer programs in the nation for decades. In fact, Pitt head coach Jay Vidovich held the same position for the Demon Deacons from 2004 to 2014, winning a national championship in 2007. Pitt does not face the possibility of playing Wake Forest until the championship game, but if this occurs, the odds will likely favor the Demon Deacons.

Despite an early loss to a solid Clemson team, the Demon Deacons have played just short of flawless this season. The team gave up just five goals all season, and defeated Clemson in a rematch. Wake Forest’s 7-1 record does not include an exhibition game where it defeated Pitt 3-2. Its second place national ranking does not reflect the fact that it led the conference in goals scored, save percentage and total goal differential.

For the Panthers to win the tournament, they will likely have to go through the nation’s top defensive team in Wake Forest, led by sophomore defender Nico Benalcazar. But the Demon Deacons aren’t the only great defensive team in the tournament. North Carolina, albeit in six total games, led the conference with just four goals allowed all season. If the Tar Heels and Panthers both win their first round matchups, the two teams will square off in the semifinal.

While Wake Forest and Pitt remain the teams to beat on both respective sides of the bracket, every game could swing either way in this tournament. Virginia Tech, Notre Dame and Virginia all gave Pitt close games, though the Panthers did prevail all three times. Clemson, one of the three-seeds, managed to upset Wake Forest earlier this year.

Pitt will rely on its offense to do what it did all season, jumping on the opposition and grabbing an early lead. If the Panthers allow a team of the caliber of North Carolina or Wake Forest to go ahead first and drop back defensively to focus on simply protecting a lead, their chances of scoring will diminish greatly. Pitt must find the back of the net first, which they have done in every single game in 2020.

A conference championship would do wonders for Pitt’s pedigree. Vidovich has reenergized the program in his tenure, bringing Pitt its first NCAA tournament win last year, and he now has his eyes on coaching the school to its first ACC championship.

While not an easy task by any means, winning the tournament and defeating the top ACC teams may just cement Pitt as one of the ACC’s powerhouse programs for years to come. That ACC championship quest begins against Duke at 6 p.m. on Sunday.