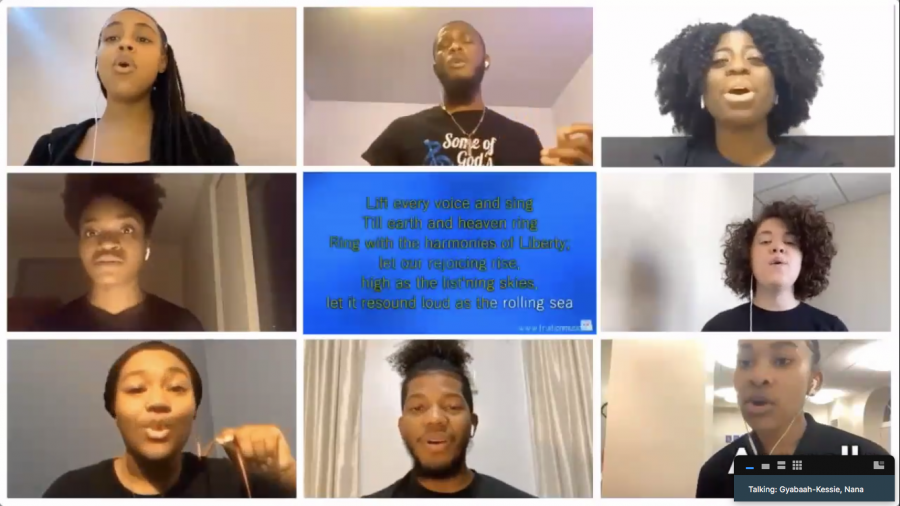 By Punya Bhasin and Ashton Crawley

With an extremely irregular semester coming to an end, many students are still feeling the effects of George Floyd’s and Breonna Taylor’s deaths at the hands of police this summer. Pitt’s Black Action Society decided to take time this week to honor Floyd, Taylor and other victims of police brutality.

Pitt’s Black Action Society held an online vigil for Black lives lost to police brutality on Wednesday evening. Around 40 people attended and listened to the organizers read poems, play a song and talk about their experiences as Black students.

Ulyera Brooks, an undeclared first-year, read a poem at the vigil. She said the reason she went to the event was to feel more connected to the Black community on campus and find some solace alongside her peers.

“After seeing everything that happened this summer, it felt like I was literally drowning in my own sorrows and my own pain, it felt like there was nowhere to turn, making it difficult for me to adjust to college, especially with it being my first year,” Brooks said.

Organizers presented a screen of lit candles as Nana Gyabaah-Kessie, a senior molecular biology major and president of the African Students Organization, gave a short speech about the candles’ significance.

“In light of the many losses our community has been faced with, these candles illuminate the souls and spirits of the lives we must advocate for by taking the road less traveled,” Gyabaah-Kessie said.

Gyabaah-Kessie said the purpose of the vigil was to honor and express the emotions many students were feeling in light of the numerous killings of innocent Black people and the continual rise and influence of the Black Lives Matter movement.

“Campaigns like Black Lives Matter have become more than movements, they have become newly transformed lifestyles in which people have adapted and incorporated into their day-to-day beings,” Gyabaah-Kessie said.

Gyabaah-Kessie then shared her screen and played a rendition of “Lift Every Voice and Sing”  which is commonly known as the Black national anthem. The pre-recorded video was performed by a few members of Pitt’s Some of God’s Children Gospel Choir.

The vigil was interrupted by “Zoom bombers” — individuals who crashed the event in an attempt to distract attendees from its message. Loud screeching noises were heard from one unmuted microphone. The screeching noises then continued from multiple speakers and inappropriate images were drawn over the slides.

Due to the “Zoom bombers” playing explicit music, drawing lewd images on the screen and saying random and absurd phrases in an attempt to derail the vigil, the organizers decided to forgo the moment of silence for George Floyd and all other lives lost to police brutality.

In response to the chaos, Ajani Powell — the social action co-chair of BAS who is also a columnist for The Pitt News — said she was taking down the names of those individuals who were disrupting the event, and that they would be reported to Dean of Students Kenyon Bonner was in attendance at the event.

Powell said she wants to create a safe space for all Black students across campus. She read a poem she wrote in response to this summer’s events and the treatment she and many other Black Americans have faced.

“I just know that one day that I could be the next face, and I just want others to know that there are other people who care for them and make them aware that Black people have a space to find comfort on campus,” Powell said.

While Bonner made no statement at the event, the organizers said they will be reaching out to him and are awaiting a response from the University surrounding the mistreatment they experienced during this event.

“I want people to be scared of losing their jobs and places at schools when they conduct themselves in a racist manner, because that fear is the fear that Black people and other minorities go through constantly,” Powell said.

Brooks said she remains startled and appalled at the events that transpired at the vigil, but she plans to continue to attend more events embracing Black students and hopes the University addresses the blatant disrespect and racism that continues to exist in the school environment.

Powell said while she is disgusted by the behavior shown by some of the individuals, she is in no way surprised that this occurred, and wishes she had been better prepared to deal with it.

“You can’t be surprised that people are disrespecting these events, because I think this behavior is more normalized towards the Black community, which was the reason we were having events like these in the first place,” Powell said. “It’s honestly pathetic and disgusting that people would have to stoop that low, and that they can’t recognize basic humanity.”

Powell emphasized that the purpose of the vigil was to commemorate everything that the victims of police brutality lived for, and to honor and celebrate their lives.

“The disgusting behavior shown by the Zoom bombers is both reflective of what Black people experience in society and a reminder that we still have to continue and fight for our rights,” said Powell.