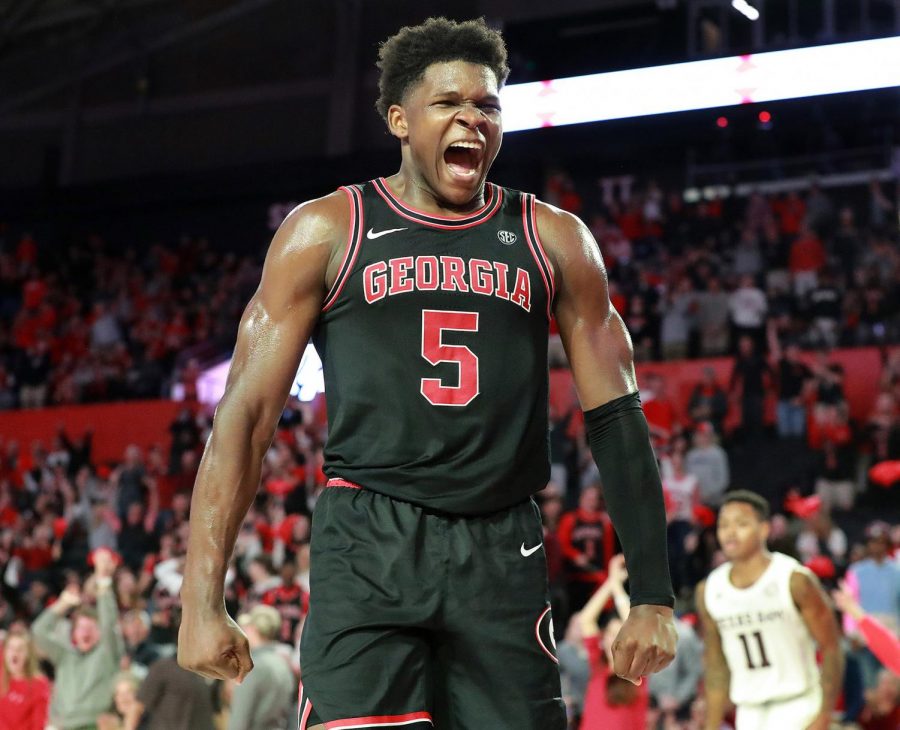 Georgia's Anthony Edwards reacts to his breakaway slam dunk after making a steal late in the second half against Texas A&M on Feb. 1.

By Eddie Lasker, For The Pitt News

With a record-tying 17th Los Angeles Lakers championship in the rearview, the NBA rapidly approaches its start of the season on Dec. 22. To accommodate the altered schedule, the NBA draft will take place Wednesday. An incomplete college season will make prospects harder to evaluate, but most of the top 10 picks should come easily.

Viral superstar LaMelo Ball will be first off the board, followed by short-lived college stars James Wiseman and Anthony Edwards. The oldest player in the lottery, Obi Toppin, will go next to Chicago and the Israeli forward Deni Avdija will round out the top five.

Ball is the clear pick here. It’s not every day you can find a 6-foot-8 point guard with court vision like Jason Kidd. His ability to dominate in transition and his knack for finding open guys in the pick and roll make him a stellar fit for almost every NBA roster. Ball has a penchant for shooting the 3-ball, but at a clip of 25%, his coaches will try to break that habit.

Ball is also an attractive trade candidate, given how the Timberwolves appear to have made a commitment to point guard D’Angelo Russell. Teams in search of a star — like the Knicks or Pistons — are most likely to make a move for Ball.

This pick is a layup for the Warriors. They add a player who averaged a double-double in his short college career to the greatest shooting backcourt in NBA history.

Wiseman will complement spacing the Warriors create and dominate less athletic centers one on one. Under the tutelage of defensive mastermind Draymond Green, Wiseman will use his 7-foot-6 wingspan to emerge as a dominant defender as well.

If anyone knows the value of hyper-athletic wings in the NBA, it’s the greatest athletic wing of all time, Hornets owner Michael Jordan. Pairing Edwards with emerging star Devonte Graham might finally drag the Hornets out of NBA mediocrity.

The 6-foot-5 wing will play off the ball and get most of his buckets in transition. He’s shown flashes of an elite outside shooting game, but he must improve his 29.4% 3-point rate to at least the 35.8% league average if he wants to become a dominant scorer in today’s NBA.

Chicago fans can feel the winds of change blowing. After jettisoning the team’s old coach and front office, Chicago should look for high-character guys to come in and change the locker room culture. Who better fits that description than four-year standout Toppin? Unranked coming out of high school, Toppin’s fierce work ethic transformed him into an elite player.

The 2019 NCAA Player of the Year should figure to start at the small forward spot his rookie year and provide immediate scoring.

Cleveland can’t expect to compete for championships anytime soon, so taking the time to develop 19-year-old swingman Avdija should pay dividends. His scoring dominance in the EuroLeague has led many to compare him to current league superstar Luka Doncic, but that’s not an entirely fair comparison. Look for Avdija to develop into a spot-up shooter in the mold of Doug McDermott.

The Hawks ranked No. 16 in 3-point shots made last season, despite star point guard Trae Young’s proficiency from distance. Vassell will help solve that problem, shooting 41.5% from three at Florida State last season. His defensive acumen should allow him to play immediately with Atlanta’s young core and compete for a playoff spot.

Haliburton entices franchises with his smooth handle and sharp shooting but presents concerns for NBA scouts with his small frame. Questionable finishing ability and decision-making also contribute to his fall from the top five. The Pistons take a gamble here and hope to secure their lead guard of the future.

The Knicks ranked in the bottom half of the league for almost every defensive statistic last season. Okoro, a high-motor defender, can guard every perimeter position. His athleticism and desire to help his team win will help revitalize the struggling franchise.

An athletic marvel, Okongwu’s explosiveness and ability to finish above the rim provide plenty of highlight-reel material. His outside game has evolved, but don’t expect him to step out from three early in his career. He and frontcourt mate Rui Hachimura will create lots of second opportunities for a Wizards team that struggles with shooting.

Like his college teammate Vassell, Williams dominates defensively. He doesn’t have a clear role on the offensive side of the ball, however.

Williams shot only 32% from three and 82% from the free throw line. If he can improve his shooting, Williams could distinguish himself as a deadly small ball forward for the Suns.