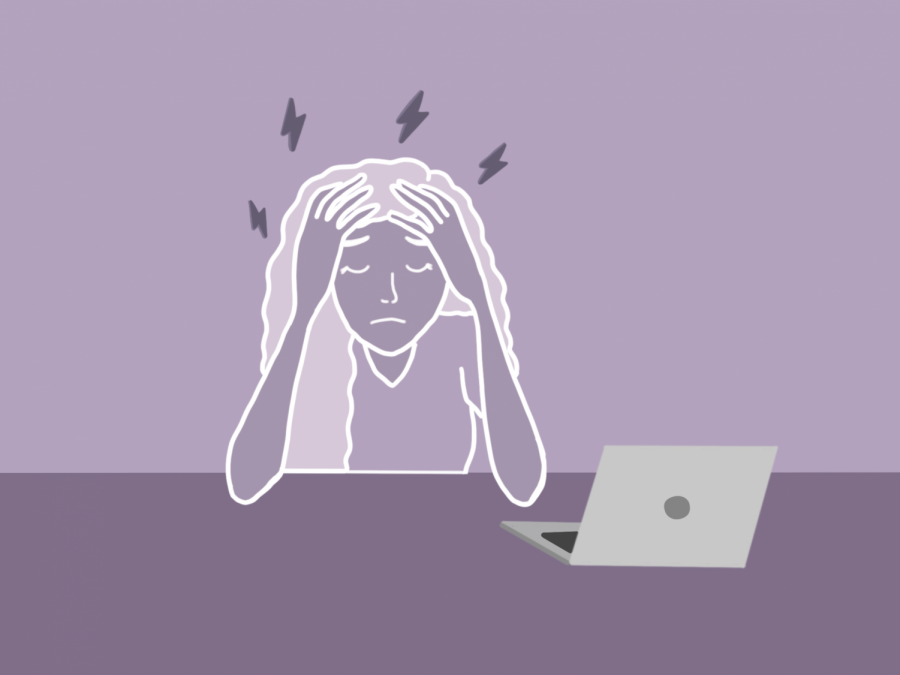 I am a solitary person. In some ways, the prospect of a fall semester online was exciting to me. I was disappointed I wouldn’t be able to work face-to-face with my instructors and see many of my friends. But I was also looking forward to the parties I wouldn’t feel pressured to attend, and the social invitations I now had a golden excuse to decline, and the lack of conversation I’d have to make before, after and in between my classes.

I did enjoy all of this — to some extent. But the truth is, this semester was also unbearably hard on my mental health, which I hadn’t expected.

I had days when I could hardly get out of bed, and days when I was so anxious I couldn’t eat. I know I’m hardly the only student who experienced this, but it’s been difficult for me to admit. If this semester absolutely obliterated your mental health, that’s nothing to be ashamed of. But it’s important to acknowledge this in order to get back on track, and begin to recover, for the spring semester — which probably isn’t going to be much different from the fall, unfortunately.

College-aged students, even pre-pandemic, already suffered some of the highest rates of mental illness. The Center for Disease Control and Prevention released data in late August suggesting that  — in young adults especially — the pandemic has intensified mental illness. Of the young adults surveyed, 62.9% reported experiencing depression, anxiety or both. 24.7% reported having started or increased substance use to cope with pandemic-related emotions. Ultimately, 74.9% of young adults surveyed reported at least one adverse mental health symptom. Those who have suffered from eating disorders in the past are seeing a resurgence of symptoms, and even people who don’t have eating disorders are reporting stark changes in their eating habits. And due to general stress, people are reporting more frequent psychotic episodes and panic attacks.

Sitting at the computer for hours a day is exhausting and only a semi-fulfilling substitute for in-person interaction. Online classes make focusing difficult, and though the amount of work is the same, it’s harder to keep up. Many of us are also cooped up in small spaces, leaving the house only for work and exercise. I joke a lot about my workspace being 3 feet from my bed — and it is — but it’s hard having so little space. I don’t miss parties or big social gatherings, but I miss Thursday nights in the newspaper office and going on runs with my friends. I miss studying in Starbucks, and I miss not worrying that I’m going to get my mom sick. I am, in some ways for the first time in my life, very lonely. I suspect a lot of students are.

I’ve also spent the entire semester feeling like I’m at the mercy of an institution that seems to care more about getting my tuition dollars than going above and beyond to keep me healthy and safe. In October, Pitt offered one “Student Self-Care Day,” but many of us still had assignments due the next day and exams to study for. It provided little relief. In the spring, only because Student Government Board President Eric Macadangdang advocated for it, we now have two. This comes in place of regular spring break, which Pitt cut because of COVID-19. And aside from randomized surveillance testing, Pitt primarily only tested individuals who were symptomatic, or had been in contact with someone who tested positive. Most recently, Pitt mandated a shelter-in-place that doesn’t have much to do with sheltering or staying in place. The University is offering students mail-order testing kits, but this is too little, too late. Most people will be home before results from the test become available, and unlike some other universities, Pitt isn’t offering so-called “exit testing” to allow all students the option to get tested before they leave for break.

This is all to say, every time I turn a corner there’s another stressor.

You’ll hopefully have a break from at least school work in December, and most of January. This is a good time to really sit down and reflect on this past semester. Think about symptoms of depression — like sleeping too much, crying more than usual or feeling a general lack of motivation — and ask yourself if they were worse than the past. Ask yourself if you’ve been drinking too much or not getting outside enough. These are questions that only you know the answer to, and only you can find the resources to help. This might be a good time to find a therapist if you don’t already have one, or at least open up to someone about the things you’ve been struggling with this semester.

For me, much of this has been realizing that I can be a solitary person and still be lonely — that there’s no shame in that. It’s been getting myself out of bed even when it seems impossible. It’s also been understanding that online school is hard, and if I’m not performing the way that I usually do, I try to remind myself that I’m living through a global pandemic.

The spring semester is going to be hard. But we’ve already lived through one entire pandemic semester, and now we have something to learn from. We’ll be OK. But we have to admit we’re struggling. We have to use break to make changes.

Leah writes primarily about mental health and the spices of the world. Write to Leah at [email protected].