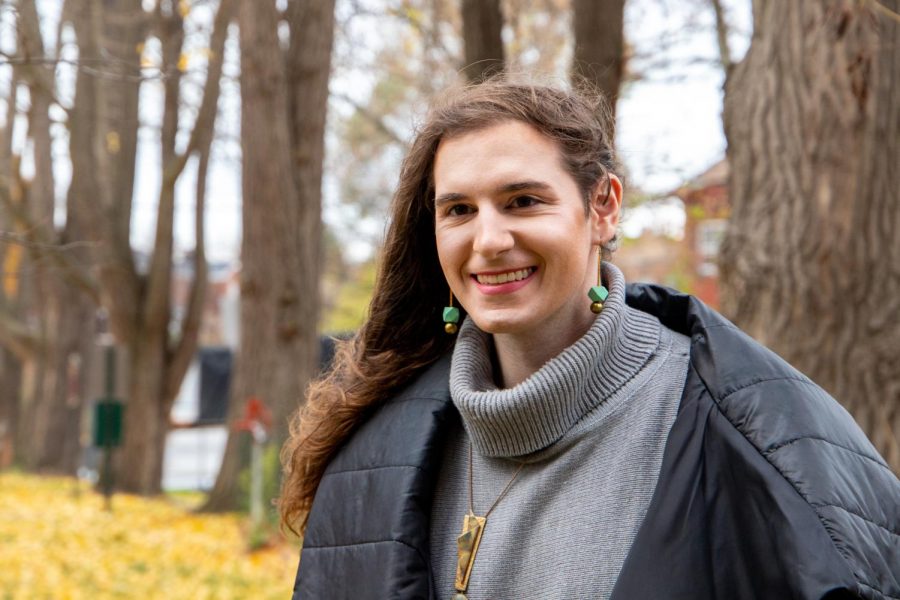 S. Brook Corfman’s latest collection of poetry, “My Daily Actions, or the Meteorites,” describes an oncoming ecological disaster as “a microwave being slowly built around me.” That quote is just one image from the book reflecting on daily life amid an imagined oncoming apocalypse caused by the titular meteorite.

Corfman, an author and current Ph.D. candidate in the English department’s critical and cultural studies program, read excerpts from the collection during a Zoom seminar on Monday. The poet, whose work explores transgender identity, also discussed their book with Nancy Glazener, director of the gender, sexuality and women’s studies program, and Jules Gill-Peterson, an associate English professor with a secondary appointment in the GSWS department.

“My Daily Actions, or the Meteorites,” published in September, is a collection of poems Corfman wrote as part of a daily writing exercise. The format of the book is a series of prose poems, a medium Corfman said they chose for its ambiguity.

“The prose poem — which is like a little paragraph, so it doesn’t have line breaks — is a form near and dear to my heart, because it doesn’t give you that much information about it before you start reading,” Corfman said. “A different kind of poem might give you more in the way that it’s spaced out or the pattern of the line breaks.”

According to Corfman, the book builds on their first poetry collection, “Luxury, Blue Lace,” which came out in March 2019 and was a more personal story about the poet’s childhood. Because the previous book focused on the past, Corfman said they wanted to make a book more oriented to the present.

“I was trying to write a poem that felt as close to me, as close to this idiosyncratic version of my perception [and] my experience as possible,” Corfman said. “Less worried about what a reader or someone else will take away narratively as a way of trying to go in the opposite direction of that first book.”

Anna Weber, the head of events at White Whale Bookstore in Bloomfield, where readers can buy “My Daily Actions” and “Luxury Blue Lace,” attended Pitt’s MFA writing program with Corfman. She said she admires their approach to analyzing and writing poetry.

“I’ve always been so impressed by their work — how they look at poetry and what it’s capable of and the work that they produced out of that sort of ethos or philosophy,” Weber said. “I really love how this second book is both a progression of what was starting to be explored in the first book and completely its own beast at the same time.”

During the seminar, Corfman read excerpts from their book, including part of the first poem in the collection, “Premonition.” Corfman said they often think about the last line of that poem.

“The line from the book that I am most interested in and proud of is the last line of the first poem, which is, ‘Each step toward or away from the door becomes impossibly detailed,’” Corfman said.

Since Corfman wrote all the poems as part of a daily writing challenge, they said they did not write “Premonition” with the intention that it would be the first poem in the book but chose to put it first because it set up the rest of the book well.

“So much of the book is interested in detail, in the way I was just talking about how these things collided, and sensation and when sensation is surprising,” Corfman said. “There’s a way in which that poem seemed to answer a question or like it was in the slightly different space that then was able to say something about what the rest of the poems were doing.”

After Corfman read “Premonition” and another selection, Gill-Peterson asked questions about Corfman’s work. According to Gill-Peterson, she first met the poet while teaching a graduate seminar and is now helping Corfman on one of their dissertations. Like Weber, Gill-Peterson said she was very impressed with how Corfman’s work combined two separate topics as a means of looking at gender.

“Corfman combines two kinds of things in particular that I think are really interesting. One is thinking about gender as ritual daily actions, just small-scale kinds of repetition,” Gill-Peterson said. “The second — and this feels really relevant to 2020, although it wasn’t written that way on purpose — is that part of what the book thinks about is what is your identity or what is your gender at the end of the world.”

Gill-Peterson asked questions about Corfman’s experience as a trans person both creating poetry and seeing themself reflected in it. After answering some of Gill-Peterson’s questions, Corfman answered some from members of the audience, several of whom were students from Gill-Peterson’s Queer and Transgender Literature class, where Gill-Peterson taught the book.

The audience asked about Corfman’s experience with publishing, some of the ideas in their book — like how astrology is just as arbitrary as gender — and the extent to which writing poetry helped them in their academic writing.

The seminar highlighted trans literature and trans poetry — including a new movement, to which Gill-Peterson said Corfman contributed, that redefines the ways in which we use language to express gender.

“I would say about Corfman’s work is part of a broader movement, especially in poetry, by queer and trans authors that look to language in particular and the way that language can capture complexity and meaning in a wide array of forms,” Gill-Peterson said.