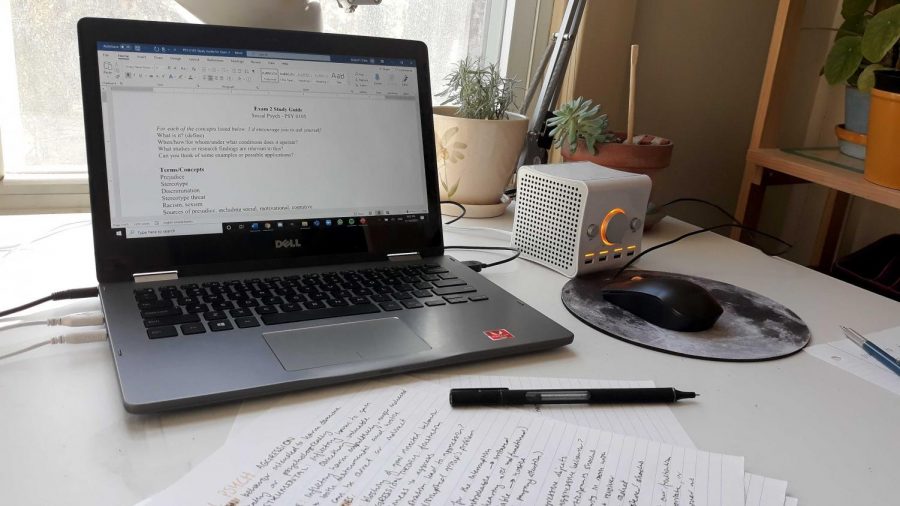 The almost fully online fall semester has been an uphill battle for many Pitt students, but it won’t be over until the dreaded finals season is conquered — which seems to bring its own particular challenges to the table.

According to Pitt’s fall 2020 final exam schedule, 16 classes — mainly chemistry, economics and statistics classes — are allowed to have in-person final exams on Nov. 23 and Nov. 24, and web-based classes will have finals from Nov. 30 to Dec. 3.

Matthew Hoffman, a sophomore microbiology major, said open-note tests have caused him to put decreased efforts into his classes.

“For online, we’re allowed to use our notes, like our textbook and everything. And so I do the bare minimum studying pretty much, and when she posts the study guides, I just look at them,” Hoffman said. “I feel classes around this time will be easier, because I don’t have to put as much effort into learning it as I would normally, with having to memorize everything.”

“I feel like it’s been a lot harder. I honestly don’t feel like I’ve actually learned a bunch, because like all exams and stuff or like a lot of them are open notes,” Porretta said. “Most of the time I have my notes in front of me, so clearly I haven’t been learning as much as I normally would in other semesters.”

For Hoffman’s organic chemistry class, he has the option to take it in-person or online, but he must complete his exam online because he is home in Lebanon, Pa. this semester. For this final, in-person students will have a hard-copy exam, can use their notes and answer questions in any order, returning to previous questions if needed. Online students may also use their notes, but must submit answers in the given order, one at a time on the online Gradescope testing platform and are not allowed to go back to previous questions.

Hoffman said he feels that the differing format is unfair, especially for students like himself, who cannot come in-person.

“I feel like, for me, it’s not fair, like I literally can’t come to Pittsburgh to take the final, so that’s not even like an option for me, to take it in person,” Hoffman said. “For me to be almost automatically at a disadvantage because I’m not there is kind of upsetting.”

Organ believes many students are also opting out of in-person finals because they are travelling home, adhering to Pitt’s shelter-in-place protocols or worried about Pitt’s increasing COVID-19 cases.

Hoffman said he believes students should have the entire Thanksgiving week off, which would give students a much deserved reading period. He also said that having a reading period would allow all finals to be taken together and he could have more time to study for his harder finals, like organic chemistry, which falls before Thanksgiving break.

Porretta also said she feels that the short period between the end of classes and her final will not give her enough time to study for her final.

“I feel like it’s gonna affect me a lot because I’m not going to have that extra time to study. I think next week we’re still gonna be learning new material, and I have to take an exam the 24th, but that literally only gives me the weekend to like go over the new material,” Porretta said. “I feel like that’ll be not enough time.”

Both Hoffman and Porretta said they were also worried about technical difficulties with Zoom and Canvas or uploading files. Porretta said her Zoom has a habit of randomly closing, making her worried that her professors will assume she’s cheating. She also worries that if she has questions while taking an asynchronous exam, her professor won’t get back to her in a timely manner.

Hoffman expressed worry about being unable to upload answer sheets in time due to internet problems, or images and graphs on exams not loading — something he experienced earlier this semester.

As a reflection on the past semester, Hoffman said he hopes professors try to understand what students are going through.

“I think professors try their best,” Hoffman said, “but I wish maybe they would be a little more understanding of not doing as well in their class for anything because it’s online.”