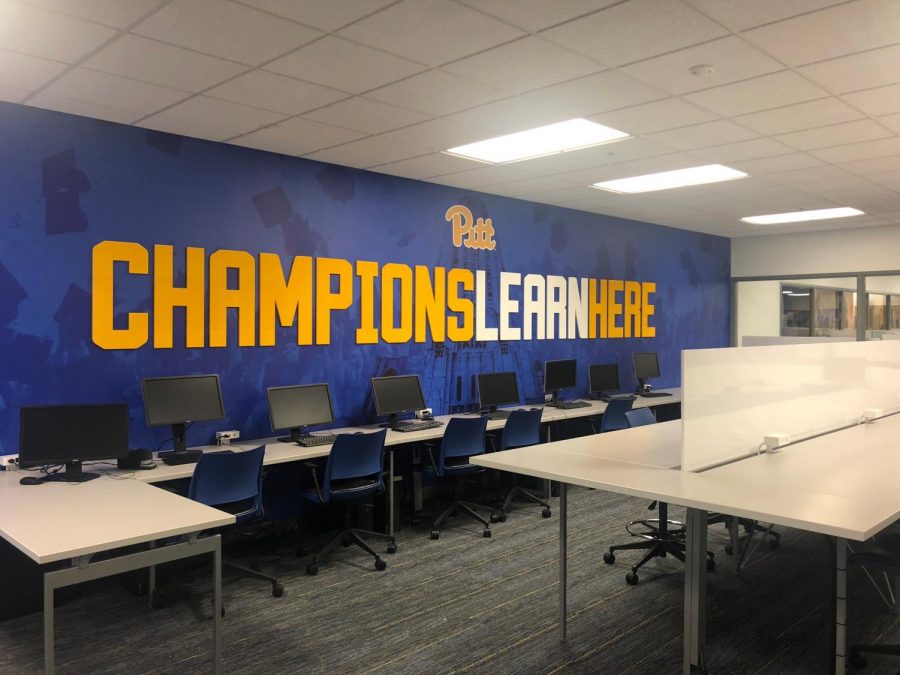 The Academic Support Services for Student Athletes program has two locations — one in the Petersen Events Center (pictured) and one at the Hearst Academic Center in the Duratz Football Complex.

Finals week in Oakland typically features late-night caffeine runs at Dunkin’, confused faces looking for exam rooms and packed study spaces at Hillman Library. When Pitt athletes get out of practice, though, you can usually find them at the Hilda M. Willis Academic Center, located in the Petersen Events Center.

At the Academic Center, Pitt’s athletes can study with their teammates, work one-on-one with tutors and speak to Pitt’s student-athlete academic counselors about their degree paths.

Associate Director for the Academic Support Services For Student Athletes (ASSSA) Christina “Tilly” Sheets gets to see her athletes particularly often during finals week, but things have changed during the COVID-19 pandemic. Of all the adjustments the ASSSA has made since March, Sheets said she misses her everyday conversation with athletes around the Academic Center the most.

“We build really strong relationships with our student-athletes,” Sheets said. “There are a lot of people that really need those in-person relationships because they aren’t as internally motivated. They need those external motivators to stay on top of their class work.”

Although the Academic Center remains open for student-athletes, Sheets said the staff has had to significantly reduce the amount of in-person activity to keep students safe during the pandemic. While the busiest nights would typically include up to 120 athletes in the study center, Pitt allows a maximum of 40 students in the building at a time now. Assistant Director Chris Byland said they have become much stricter with study time arrangements as well.

“[Before the pandemic] people could kind of come in and come out whenever they felt like it,” Byland said. “Now, we’ve given specific time blocks for teams to make sure we don’t have a situation where we’re logjammed and there’s too many people.”

Sheets and Byland both come from coaching backgrounds — Sheets coached swimming at nearby Chatham University before landing at Pitt, and Byland coached high school and junior college football. Wanting to continue making an impact in college athletes’ lives while making time to raise three children, Sheets embraced a new role with Pitt as an academic counselor in 2015.

Byland said he also wanted to leave the “nomadic” lifestyle of a coaching position, and accepting an academic counselor position at Pitt in 2006 allowed him more time at home with his family. Growing up a die-hard Pitt fan from western Pennsylvania, it seemed an obvious choice to land with the Panthers. He said he appreciates the influence he can have on athletes’ lives, but also enjoys playing the “good cop” role with his students.

“We don’t have to yell at them,” Byland said with a laugh. “We try to help them, and we don’t necessarily have to put the screws to them from a playing standpoint, so we get to be more friends than a coach.”

Like a coach celebrates victories on the field, Sheets and Byland celebrate milestones in students’ academic careers. ASSSA enjoyed an abundance of accomplishments in the spring, seeing 277 athletes named to the ACC Academic Honor Roll and all 18 Panther teams earning GPAs of 3.0 or higher.

“We’re both competitive people. I want to see people win, whether that’s winning on the field or winning in the classroom,” Sheets said. “When people surprise you and do really well in school, it’s something that you can celebrate together.”

With fewer face-to-face opportunities to build these relationships and celebrate those milestones this semester, the ASSSA staff has taken extra steps to get to know this group of first-years.

“Over the past three months, meeting with them via Zoom or in small groups, or having them come into the study center in their team groups has been a good way for us to get to know our new students,” Sheets said.

Pitt football must prepare for an especially unconventional finals week this semester, where the altered academic schedule puts players in an unfamiliar situation. While exams usually take place during the long schedule gap between Pitt’s final regular season game and college football’s bowl season, the altered academic schedule combined with last week’s postponement plants finals week in the thick of the regular season.

“Obviously, this weekend [we’ll] spend a lot of time on academics, so just fill time where time is void,” Pitt head football coach Pat Narduzzi said during Monday’s press conference. “But obviously their academics and studying for those finals, usually there’s no practice during finals week, so it is a little bit different this year for sure. And it’s worrisome, as you can imagine.”

Byland said the ASSSA staff has emphasized early preparation and conducted exam reviews virtually for their athletes, which he said has at least proven more accessible to students than having to show up to an in-person review session. Sheets added that this year’s finals schedule doesn’t feature as dependable of a format as past years, when the staff knew where athletes needed to be at certain times.

“What I’m finding is that there’s a lot of nontraditional type finals going on in terms of whether it’s an additional assignment or a paper or a test that they have an entire day to take,” Sheets said. “So just organizing yourself and understanding when things are due I think is really important, because that will help you figure out how you’re going to prepare for your finals.”

Sheets said that Pitt has tested the ASSSA staff for COVID-19 frequently alongside the athletes, helping them feel comfortable in their working environment, adding that they have primarily left it up to the students to decide if they want to attend classes in-person or remotely. Byland said that most of them have chosen to remain online.