Satire | Nine ways I would have pranked the voter fraud hotline 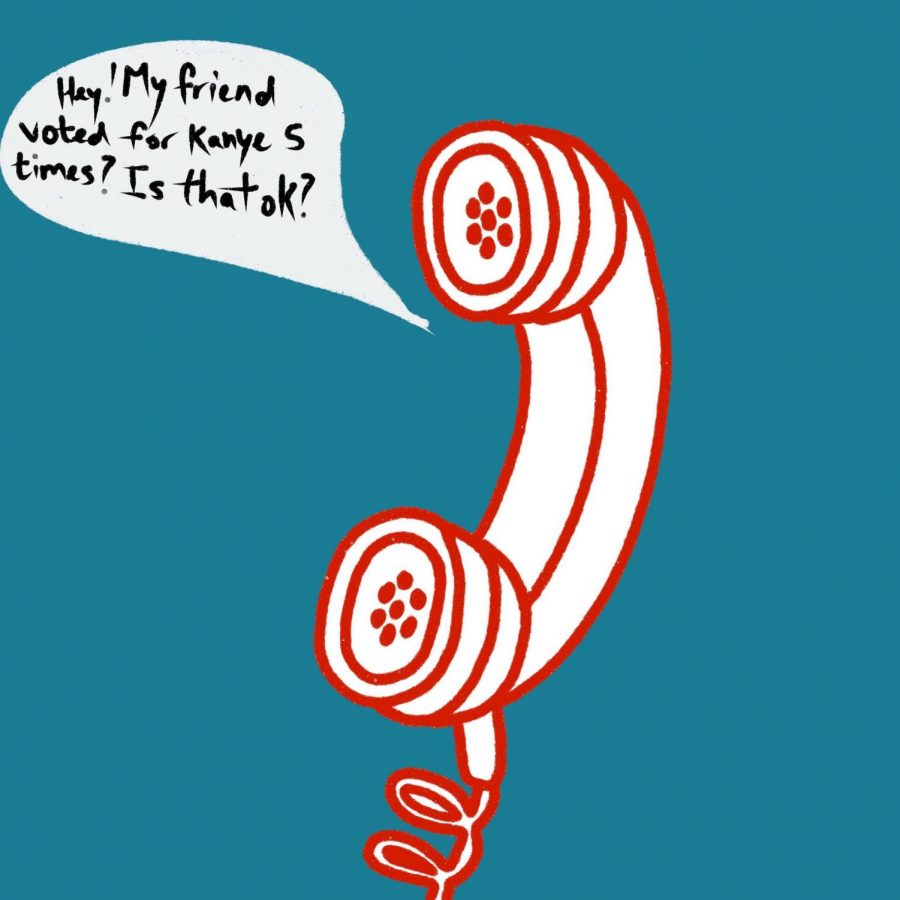 In response to what experts say looks to be a completely fair election, the Trump campaign set up a voter fraud hotline in early November for civilians to report instances of foul play during ballot counting. Unfortunately, the hotline was discontinued on Nov. 15 due to the overwhelming number of prank calls.

I had so many plans for prank calls that I never got to execute because I was working up the courage to do it. You see, I still have the brain of a middle school child who is afraid of getting in trouble all the time, so I didn’t want to call until I was certain I wouldn’t get arrested. While it may be too late to call the hotline, it is never too late for me to capitalize on my mildly humorous ideas through this publication. Thus, here are the top nine ways I would have prank called the voter fraud hotline.

Warning — if you have the level of commitment to be watching “Supernatural” right now and you don’t want the plot to be spoiled, skip to the next item. Carry on, my wayward son. If you’re anybody else, but especially if you were a child watching Supernatural in the early 2010s, I am thrilled to tell you that Supernatural is still airing and it just made #Destiel #canon. They did it in a weirdly homophobic way, where Castiel confessed his love for Dean and then was sucked into super-hell while Dean stared blankly at him — which is still a better outcome than my most recent breakup if I’m being honest.

Anyway, this revelation has me reliving my Tumblr days, and I would love nothing more than to call the hotline and do a dramatic reading of the fanfiction leading up to this historic moment, as well as the fanfiction that has been created because of it. This is the main prank I wanted to achieve, but I can’t write a whole column about it without being publicly disgraced, so these are my other ideas.

I am a bit of an amateur musician, and I think those on the other end of the voter fraud hotline would really benefit from hearing my songs. I can’t be certain, but I picture these people manning the phones as conservative men. I think that they would really benefit from hearing the song I wrote about the menstrual cycle in eighth grade. I also have a couple tunes about being gay and mentally ill, and I think it would really allow them to see how the other half lives. I know that if I actually called the voter fraud hotline, they probably would have hung up on me, but I really think there’s a chance that Rudy Giuliani could’ve been touched by my music, and he would have invited me to play the song I wrote about the film “The Martian” at the White House.

Ask if their refrigerator is running

I figured you can never go wrong with a classic. Actually, you can go wrong. I don’t think this joke is funny.

Ask them to proofread my Intermediate Nonfiction final

Speaking of my creative writing minor, I’m workshopping a 3000-word paper for my Intermediate Nonfiction class, and I could really use an extra set of eyes. It isn’t very good, and that is a problem. I feel like people with a different point of view are always useful in workshops, and I feel like the people working this hotline do not have a lot in common with me. I feel like if I called and asked nicely, they totally would have read it. This is reaching across the aisle.

The “colonial woman” bit from “Bridesmaids”

Does anyone remember that scene from “Bridesmaids” where Kristen Wiig is on the airplane and she is super high on pills so she hacks the intercom and says there’s a colonial woman on the wing of the plane churning butter? Back when I was a stage manager I would do that bit on the dressing room intercom almost every night. No one liked it then, and no one will like it now, but I feel like it’s on par with some of the serious calls they would be getting. There’s something they’re not telling us.

This isn’t malicious, I just really need a good scream. I feel like Trump is the reason I want to scream at least once a week, so I think this is the closest I could have gotten to him actually hearing me. Alas, now the people at the grocery store will have to listen to my anguish instead.

I have been getting a lot of calls lately about an extended warranty on my vehicle. I would probably take this seriously if I actually owned a car. There’s also been the odd call about being double charged for an electric bill that isn’t in my name, and even a good old-fashioned voicemail just asking me for my social security number. I feel like I’m really good at the automated-lady voice at this point and I genuinely think I could cause some confusion. I have this beautiful image of Rudy Giuliani answering the phone and going “Huh? What electric bill?” before hanging up on me.

Just talk about how good “The Queen’s Gambit” is

As I’m writing this, I am still reeling from the finale of “The Queen’s Gambit.” If you aren’t familiar, “The Queen’s Gambit” is a new Netflix series about a young woman named Beth who is a chess prodigy in the ‘60s. I didn’t care about chess, but when Anya Taylor-Joy is playing it, I apparently care a lot. The show is also somehow full of men that I don’t hate, which is surprising. I really want to talk about the show, but you really can’t say much without spoiling it, so I was hoping to try having a discussion with whoever sits on the other end of the voter fraud hotline about it. All this is to say that if you have watched “The Queen’s Gambit”, my email is listed below. I am desperate.

Just play “Loser” by Beck over and over again

Do I really need to explain this one?

Alex Dolinger is a senior theatre arts major with a creative writing minor. They primarily write satire about how the world is ending. You can reach them at [email protected].