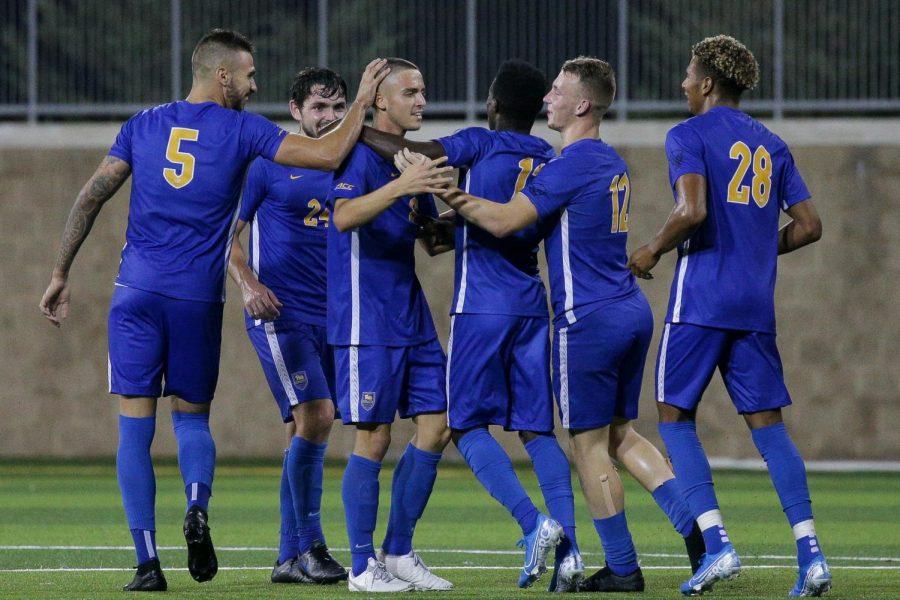 The Pitt Panthers defeated Notre Dame 3-1 on Wednesday, setting up the program’s first-ever ACC championship appearance on Sunday against Clemson.

No. 1 Pitt men’s soccer got back to full strength when they took the field in Raleigh, NC, on Wednesday night, and it certainly showed. The Panthers defeated Notre Dame, 3-1, to secure their place in a bout with Clemson for the ACC title.

With star first-year forward Bertin Jacquesson back to the starting lineup, Pitt had an electric first half offensively. The Panthers controlled play for most of the period and generated several chances early. One of these shots, however, turned out to be a goal of the year candidate.

On a 21st minute free kick opportunity from just over 25 yards out, Pitt head coach Jay Vidovich turned to sophomore midfielder Veljko Petkovic to work his magic. Petkovic stepped up and curled a breathtaking shot perfectly into the top-right corner to give the Panthers the upper hand early.

Pitt remained on the offensive, as sophomore fullback Raphael Cirvello played a perfect cross in the 34th minute to Pitt’s top goal-scorer, sophomore attacker Valentin Noel, for a point-blank goal.

Late in the first half, the Panthers seemed to struggle a bit defensively, allowing the Fighting Irish to build a couple of threatening chances. But Petkovic found the back of the net once again in the 44th minute on a deflected shot attempt. While Notre Dame found some offense late, Pitt managed to hold its 3-0 lead into halftime, outshooting the Fighting Irish eight to six in the first period.

The second half, however, proved a completely different story. Notre Dame spent the entire period aggressively attacking Pitt’s back line, and the Panthers struggled to tackle or possess the ball. While Pitt allowed an eye-catching 12 shots in the half and 18 total shots in the match, senior goalie Nico Campuzano played a nearly flawless game, making seven total saves.

Notre Dame eventually drew and converted an 87th minute penalty kick to make the final result a bit more respectable. Despite a few scary situations, Pitt’s defense ultimately fended off the Notre Dame attack and protected its lead, resulting in a 3-1 Panther victory.

The win for Pitt means its historical run continues, as the team will make its first-ever ACC championship appearance on Sunday against Clemson. While the Tigers earned the No. 3 seed in the tournament, the United Soccer Coaches ranked them second in the nation a few days ago.

Clemson secured impressive wins against powerhouse programs Wake Forest and Virginia in its first two games of the tournament. The title match has potential for a high-scoring affair, as the two highest scoring teams in the conference face off for the ultimate prize.

The Panthers have solidified their No. 1 national ranking with each match they’ve played. They will look to cement this season in the history books with an ACC title on Sunday.