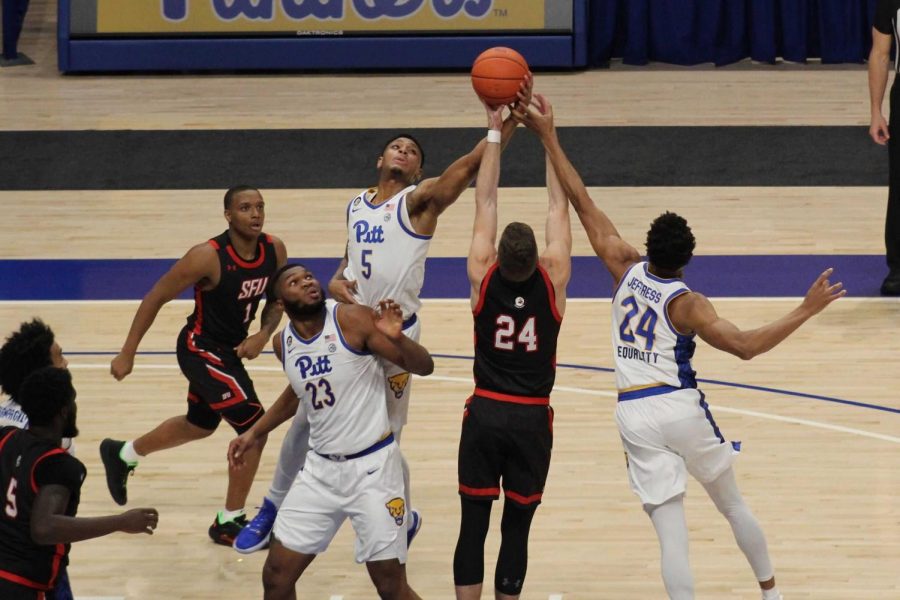 Pitt men’s basketball lost its first season-opener at the Petersen Events Center in history on Wednesday night and entered Saturday’s matinee vs. the Drexel Dragons looking for a bounce-back win.

Pitt’s “Big 3” of Junior guards Xavier Johnson and Au’Diese Toney, plus sophomore forward Justin Champagnie, came through early and often on Saturday. They combined for 66 points to power the Panthers (1-1 overall) to an 83-74 win over Drexel (0-1 overall).

Champagnie came out firing — he was the first to establish himself as one of the best players on the floor. He converted an and-1 layup from the post on the game’s opening possession and proceeded to score 10 of Pitt’s first 20 points.

But Champagnie didn’t have to carry the load by himself. Toney and fellow junior guard Xavier Johnson both had standout games against the Dragons. Johnson in particular, who struggled to handle the ball Wednesday night, was smooth and balanced Saturday.

“I thought he valued the basketball more today,” Capel said. “He made pretty good decisions too. Look, Xavier is a very good player and he had been playing really well in practice. But he picked up two early fouls on Wednesday and he panicked … I thought he was much better today.”

Champagnie and Johnson were looking to rebound from lack-luster performances versus St. Francis, but Toney was simply ready for another day of work. His 20 points were one of the few bright spots on Wednesday, and Toney was stalwart for the Panthers again against Drexel.

Toney tallied a second consecutive 20-point game and showcased a diverse skill set, the likes of which hadn’t been seen since Toney’s high school days. Through only 80 minutes of basketball in the 2020-21 season, he’s been Pitt’s steadiest force.

So far, he’s living up to his preseason hype and it comes as no surprise to Johnson, who said Toney is one of the best two-way players in the ACC.

“I think I told you guys that,” Johnson said. “He’s one of the most complete players in the league, I really believe that.”

And Pitt used every bit of Toney’s best in conjunction with Champagnie and Johnson to put the Dragons away and secure their first win of the young season.

But Pitt’s stars came through down the stretch to preserve a win. Johnson nailed a 3-pointer on the ensuing possession, Champagnie scored five straight points and Toney made a couple buckets of his own to push the Panther lead back to double-digits.

Toney said Saturday’s performance is what the Panthers expected from themselves entering this season, and it was driven by the combined play of Johnson, Champagnie and himself, Pitt’s leading men.

“Once us three are clicking, everyone else follows along,” Toney said. “I don’t see why if we’re all clicking, why we can’t be a good team.”

Redshirt sophomore guard Ithiel Horton was a valuable contributor from the outside for Pitt. He made two of five 3-point attempts in 17 minutes of action.

Capel said after the game that he expects the team to announce  another non-conference game soon. For now, Pitt is currently not scheduled to play again until Dec. 9, when it travels to Northwestern as part of the ACC/Big 10 Challenge. Tip off against the Wildcats is currently slated for 9:15 p.m.