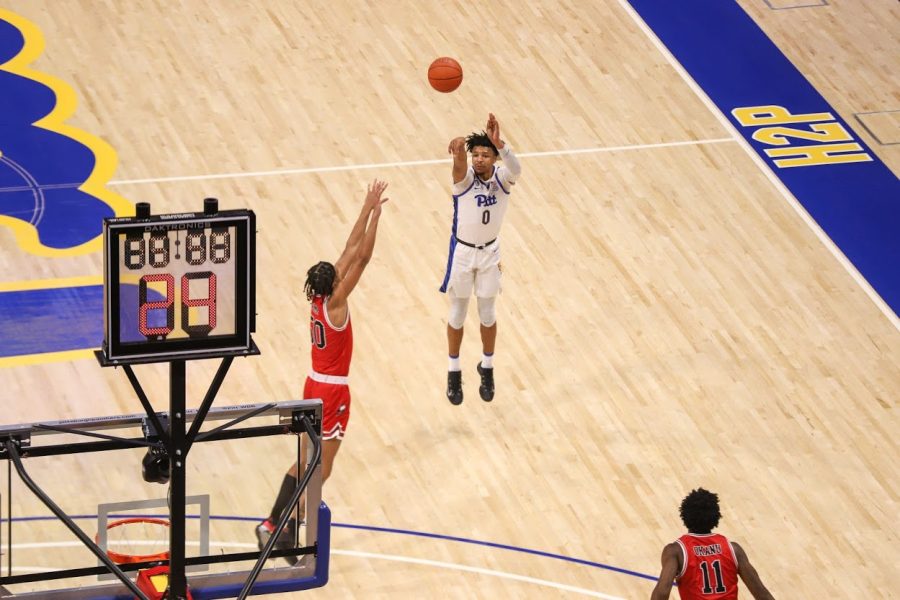 Last year’s meeting between the two teams didn’t come as easy for the Panthers. Both squads struggled offensively, and it took a 15-0 closing run for Pitt to steal a 59-50 victory.

The Panthers led from start to finish this time around, thanks in large part to the notorious trio of junior guard Xavier Johnson, junior forward Au’Diese Toney and sophomore forward Justin Champagnie. The group combined for 66 points in the team’s 83-74 win over Drexel last Saturday, and produced 37 of the Panthers’ 45 first half points against the Huskies.

Toney set the tone for the Panther offense early. He hit a mid-range jumper on Pitt’s opening possession, and made two 3-pointers shortly after, scoring eight of the team’s first 10 points. After only hitting five threes against Drexel, Pitt matched that amount within the first ten minutes against Northern Illinois.

“It was good to see the ball go through the basket,” Pitt head coach Jeff Capel said.

But the biggest difference of the first half came in the form of ball security, which the Panthers continued to improve on from the start of the season. Pitt turned it over 23 times in its season-opening loss to St. Francis, cutting that number to 13 against Drexel. The Panthers only coughed it up twice in the first half on Saturday, while racking up 14 assists. The Huskies, meanwhile, turned it over nine times, resulting in 15 Panther points.

Toney quickly cooled off from his hot start. After hitting his first three shots, he missed his next three, including a blown fastbreak layup that led to a transition score on the other end. A charging call gave Toney his second foul with four minutes left in the half, forcing Capel to take him out of the game.

Champagnie took over in his absence. The 6-foot-5, 200 pound force used his size and quickness to attack the basket, leading the Panthers with 15 first half points, and Johnson followed closely behind with 13 of his own. Champagnie said the team’s offensive fluidity starts on the other side of the court.

“We gotta pick it up on the defensive end to get it to the offense,” Champagnie said. “But it’s fun to play basketball like that where everybody’s getting some and everybody’s playing well.”

Northern Illinois played without leading scorer Tyler Cochran on Saturday, who didn’t travel to Pittsburgh due to COVID-19 contract tracing protocols. Junior guard Trendon Hankerson picked up the slack, scoring all 15 of his points in the first half to keep the Huskies in the game early on.

The Panthers’ defense tightened up at the end of the half, though. A four-minute scoring drought from the Huskies, combined with Champagnie’s scoring burst, gave Pitt a 45-29 halftime lead.

The Huskies couldn’t gain any momentum to start the second half, as the Panthers’ deep shooting barrage continued. Pitt redshirt sophomore guard Ithiel Horton caught fire quickly, hitting three shots from behind the arc in a span of two and a half minutes.

Horton, who sat out last season after transferring from the University of Delaware, hadn’t found his rhythm in the first two games of the season. He had five points against both St. Francis and Drexel, failing to get many open looks. The looks came on Saturday, and he delivered with 15 points, shooting five of 10 from deep.

“I tried not to put a lot of pressure on myself coming into the season, but the first few games obviously showed that I put more pressure on myself than I thought,” Horton said. “The difference today was just me actually believing I could play on this level.”

Although Horton enjoyed himself quite a shooting day, Capel praised his unselfishness, pointing to his four assists and one turnover.

“I think you’re starting to see a comfort level,” Capel said. “If we can get him shooting the basketball like I know he can, and his teammates know that he can, that opens up a lot of stuff for us.”

A thunderous putback slam from Champagnie put an exclamation point on the blowout victory, giving the Panthers a 71-41 lead with under eight minutes to play. Champagnie finished with game-highs of 22 points and 10 rebounds, his seventh double-double of his career and first of the season. Roles reversed as Pitt’s starters got a chance to cheer on their teammates from the bench for the last five minutes of the game.

“Those guys come to practice every day just like us, they work hard,” Champagnie said. “They bust their behinds every day, push us, they make us better. It’s a great feeling seeing them get in the game and a lot of them score, get their first collegiate bucket. It just meant a lot to us.”

Junior guard Onyebuchi Ezeakudo, in his first minutes of the season, splashed one final 3-pointer on a lethal shooting night from the Panthers. Pitt’s 14 threes tied for the second-most in program history, and the most since the Panthers made 14 against McNeese on Dec. 16, 2017. Champagnie said that all the players feel more confident when they see the rest of the team get hot.

“You see one of our teammates make a shot, we feel like we just gotta back them up,” Champagnie said. “We gotta help them, we can’t leave our brother out to dry. We gotta pick up our own game and help the team more.”

Pitt must now prepare for its first road matchup of the season on Wednesday, where it will face the Northwestern Wildcats in the ACC/Big Ten Challenge at 9:15 p.m on ESPNU. The Panthers beat the Wildcats 72-59 in the championship game of the Fort Myers Tip-Off Tournament last year.