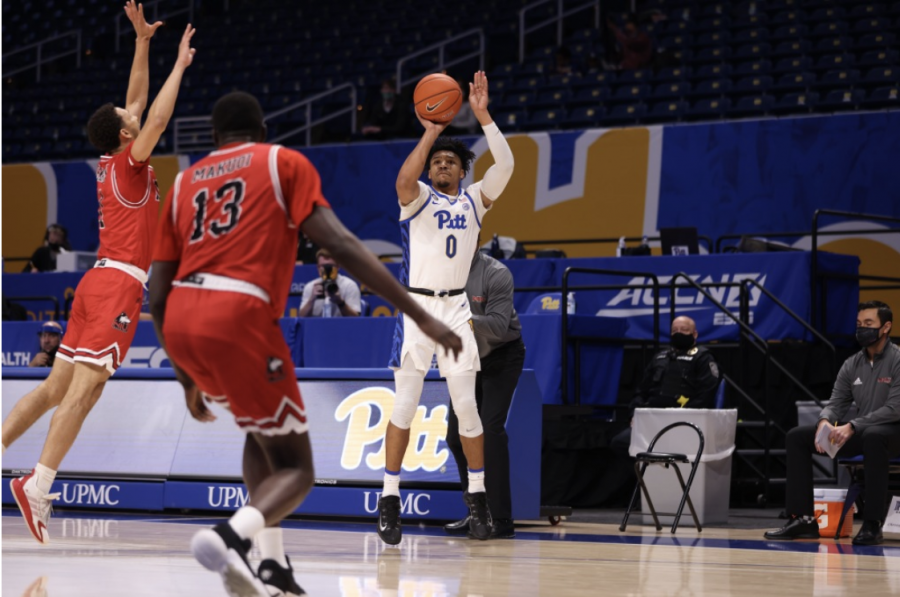 Pitt men’s basketball (5-1 overall, 1-0 ACC) made their longest road trip of the season on Wednesday night and came away with a win against a shorthanded Miami (3-2 overall, 0-1 ACC). Junior forward Au’Diese Toney’s efficient 15 points was aided by a breakout performance from redshirt sophomore guard Ithiel Horton in the victory.

After missing all of his 3-point shots and scoring just two points through two games last week, Horton was anxious to correct his shooting woes. The transfer from Delaware did and looked truly comfortable for the first time in a Pitt uniform. He scored 18 points on 4-6 shooting from 3-point distance. Horton said postgame that this is only the beginning.

Horton was part of an attack that exposed Miami’s lack of healthy bodies — particularly at the guard position — with bolstered depth of their own.

Still, the playing field was somewhat leveled by Pitt’s mistakes. With junior guard Xavier Johnson and sophomore forward Justin Champagnie relegated to the bench early and often due to foul trouble, Pitt’s first years filled in admirably. At times, Pitt had as many as four first-year players on the floor at a time.

Odukale’s game is strikingly slower and more deliberate than the speedy Johnson’s, meaning that their teammates have to adjust to whoever is handling the ball at a given moment. Still, Horton said he enjoys playing with both guards and was comfortable fitting with either player’s style.

“It’s a little bit different,” Horton said. “But we make the adjustments. I like playing with Femi, I like playing with [Xavier], but if [Xavier] is on the bench then Femi needs to come in and pick the team up. He’s a great guard, a solid guard and he’s going to continue to do that for us this year. That boy can play.”

But in making those adjustments, Pitt is attempting to walk a delicate line — you want to be able to adapt to what the game demands but not lost in different styles. Teams like to have an identity.

Capel has said throughout the first five games of the season that his team still needed to find an identity and Wednesday night’s win helped provide some clarity while leaving plenty of room for improvement.

“Well we’ve been pretty good defensively,” Capel said. “We’ve rebounded well, so I think that right there is the identity right now. We have to be better offensively. We have to value the basketball more. That’s something that’s been really disappointing that we have to correct going forward.”

The Panthers lived up to that identity early on. They defended, rebounded and ran in transition well, opening up leads as large as nine in the first half. But the Hurricanes mounted a valiant comeback effort to close the period and kept an arm’s distance from Pitt well into the second half.

Miami even briefly took the lead, 35-34, at the 15:45 mark off of an 8-0 run. Three-pointers from sophomore guards Isaiah Wong and Harlond Beverly fueled the quick burst and triggered a game-changing huddle for Pitt.

At the under 16 media timeout, Capel pulled his team in and by his own account, laid into them.

“I didn’t like the way we started the second half,” Capel said. “After we got up, we just started doing things that were not good things … I was really angry at our group and I let them know that during that timeout. And they responded in a big-time fashion.”

Miami didn’t hold their lead for even a full minute before a 3-pointer from Horton sparked the 18-2 run that would put the Hurricanes away for good. Pitt nailed jumpshot after jumpshot and forced turnover after turnover and cruised to the finish in South Florida.

Wong turned in a valiant performance for the Hurricanes. As the defacto star of his depleted roster, Wong provided an efficient 21 points in 36 minutes despite leaving the game briefly to care for a lower body injury.

For Pitt, first-year forward John Hugley had one of his strongest games to date. He used his 6-foot-9, 240-pound frame to carve out enough space on the block to score nine points on 3-5 shooting from the field.

Also of note for the Panthers was the debut of senior transfer Nike Sibande. After the NCAA’s Division I Council announced less than half an hour before tip-off that all transfer athletes would receive a blanket waiver to become immediately eligible, Sibande was able to see his first game action since early March. He scored three points and collected a pair of rebounds in eight minutes of action.

Wednesday’s win marked the second consecutive victory in an ACC opener for Capel at Pitt, but now the dog days of ACC play looms. The Panthers will return home for a weekend’s rest before the Louisville Cardinals come to Pittsburgh on Dec. 22.