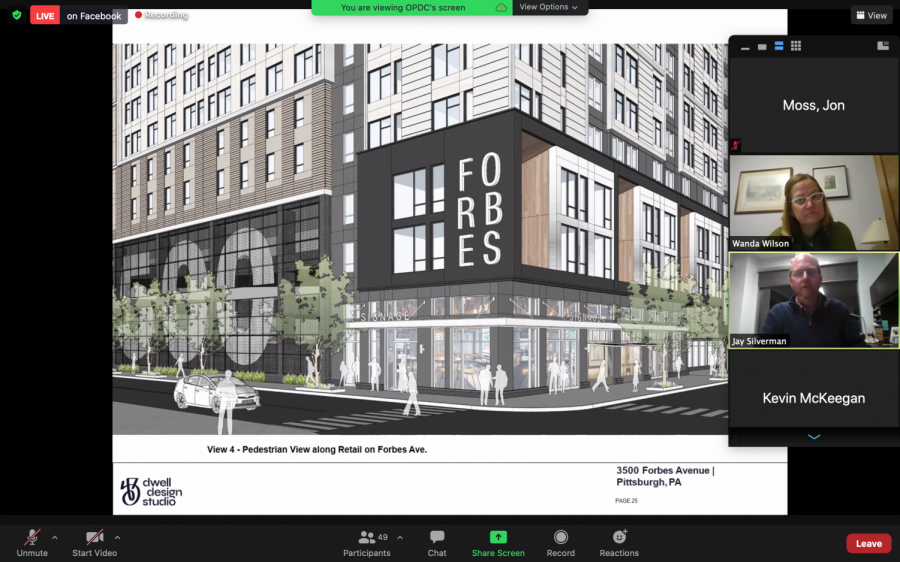 Developers faced numerous community questions as they presented an update about a proposed new Oakland apartment building on Forbes Avenue.

The Oakland Planning and Development Corp. held a Tuesday evening meeting on Zoom to discuss projects happening around the neighborhood, including the Forbes Avenue project.

Representatives from CA Ventures, a global real estate company, presented its plan for a residential and retail development at 3500 Forbes Ave, on the site of the former Marathon gas station at the corners of Forbes, McKee Place and Semple Street. The company gave an initial presentation about the project, which would be similar to the recently constructed Bridge on Forbes and SkyVue buildings, at an OPDC meeting in August.

Kevin McKeegan, of the local law firm Meyer, Unkovic & Scott, said the building would join together five adjoining land parcels and stand at 102 feet tall. The project would include just under 300 units, split among studios, one-, two- and three-bedrooms, as well as 212 parking spaces and a 153-space bike storage room. It also seeks LEED environmental certification and would include a mid-block walkway behind the new building to cross between McKee and Semple.

McKeegan said the design has already been “vetted quite thoroughly” by the City’s planning department and developers plan to give a briefing to the City Planning Commission early next year on Jan. 26. Project officials will then seek the commission’s formal approval.

But community members raised concerns about a variety of project aspects, including how the roughly 300-unit project could affect the neighborhood’s housing market. Several new luxury market-rate buildings have gone up in Oakland in recent years, leading to concerns about gentrification and pricing people out of the area.

Wanda Wilson, the executive director of OPDC, said the project “seems to only exacerbate” the lack of affordable housing in Oakland by adding new market rate units with no affordable component.

McKeegan, the lawyer for the project developers, said in response that the project is planned to be market rate but the developer would likely be willing to discuss the issue further.

“Not every project, the way the City works on this now, has to have an affordable component,” McKeegan said. “It’s certainly something I suspect CA is willing to engage in conversations about. But we’re not in a position where we can make any promises.”

Chris Bell — an official at Family House, a local nonprofit that provides housing for medical patients and their families while receiving treatment in the City — asked several questions about how the new development could affect the nonprofit’s McKee Place location. Bell inquired whether Family House’s potential new neighbors could cause noise disturbances, or exhaust that might be harmful for patients recovering from certain procedures.

McKeegan said the project’s design mitigates many of Bell’s concerns — the proposed McKee-Semple pedestrian walkway would serve as a “buffer” between the two properties, all trash and loading would take place inside the building and the parking garage traffic flow is designed to not impact Family House.

Community members also voiced concerns about whether the building needed to be set back further from the street on McKee Place to be in compliance with local zoning rules. But McKeegan said project developers have been told they do not have to abide by a 40-foot setback requirement.

“We have checked both with the title company and with the attorneys who handled the acquisition of the property — I was not involved in the transaction itself — and I have been assured … that the title insurance company very clearly said that that area, that 40 foot area … does not apply to this parcel,” McKeegan said.

Wilson said OPDC would follow up with the project developers to gather more information about whether the project is indeed not bound by the setback requirement.

“We would, like everybody else, want to look at as much information as possible to understand the issue,” Wilson said.