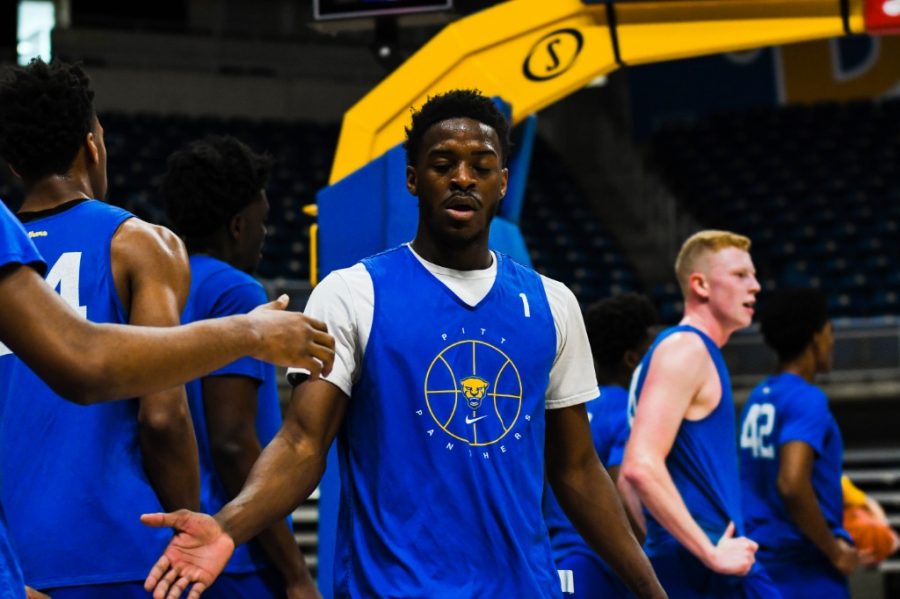 In his last season with the Panthers, junior guard Xavier Johnson (1) averaged 11.7 points, making 37.3% of his shots from the field.

Jeff Capel has reached plenty of milestones in his short career as Pitt men’s basketball head coach. He earned the program’s first win over an ACC opponent in 690 days during his first season. The Panthers won an ACC Tournament matchup the next year. Yet in the midst of his third season in Oakland, Capel had failed to nab a win over rival Syracuse in five tries.

As the Panthers fell behind at the Carrier Dome on Wednesday, it looked like Capel’s record against the Orange would drop to 0-6. The Panthers trailed by 18 points in the first half, and 16 with under 12 minutes left in the game. But in a result eerily similar to the team’s comeback win against Northwestern a few weeks earlier, Pitt (6-2, 2-1 ACC) outscored Syracuse (6-2, 1-1 ACC) 19-5 in the final six minutes to steal a 63-60 victory, the program’s first win against the Orange since Feb. 11, 2017.

Both teams returned to the court Wednesday for the first time in over two weeks after a string of postponements caused by COVID-19 issues. The Panthers had three players — senior Nike Sibande and first-years John Hugley and Noah Collier — and one staff member — assistant coach Jason Capel —absent against the Orange due to COVID-19 related protocols. Star sophomore forward Justin Champagnie remained sidelined by a knee injury sustained in practice.

Pitt’s offensive struggles against the Orange’s infamous 2-3 zone that had plagued Capel’s tenure emerged from the opening tip on Wednesday. The team committed two turnovers and missed three jumpers in its first five possessions, while the Orange’s scoring tandem of juniors Buddy Boheim and Alan Griffin connected on four of its first five shots to storm out with an 11-0 lead.

Redshirt sophomore guard Ithiel Horton — who led the Panthers with 14 points — knocked down a three to end the run, but Pitt failed to get good looks offensively the whole first half. Capel attributed some of the early frustrations to a lack of preparation, saying the COVID-19 circumstances kept the team from fully practicing until Monday.

“We tried to knock the rust off, and then you’re preparing for a zone that [the new players] have never seen,” Capel said. “It took us a while to get used to it.”

The Panthers shot 21.4% from the field in the first half, including a horrid 1-12 from beyond the arc. The Orange, meanwhile, thrived from deep, hitting seven threes on their way to a 32-18 halftime lead. Pitt had never won a road game in program history when trailing by 14+ at halftime.

Capel must have given the squad quite the halftime speech, because the Panthers looked like a different team on the offensive end during the second period. Champagnie, Pitt’s leading scorer and rebounder this year, may have had a hand in that as he took on a new role from off the court.

“At halftime after I spoke to the guys when they were getting ready to come out he actually grabbed a couple of guys, grabbed the pen and went to the board,” Capel said. “I don’t know what he was writing or what he was doing, but he was talking to the guys about the zone, about some things defensively. That’s big when you have one of your better players doing that.”

Junior guard Xavier Johnson hit a 3-pointer on the first possession of the second half, followed by another one from Horton the next time down the court. A 13-3 run to start the period brought the Panthers within five, but the Orange regained control with three 3-pointers in a 2-minute span from sophomore forward Robert Braswell. With the lead reaching double digits again and the Panthers running out of time, they needed to produce one more spark by tightening up on both sides of the ball.

“When the ball isn’t falling in, I always tell my teammates everytime we come back, ‘Don’t let the offensive stuff translate to defense,” Johnson said. “I told the guys just keep playing defense and we’re gonna start making shots and get back in the game, and that’s what we did.”

Down by 16, a string of layups from first-year guard Femi Odukale and sophomore Abdoul Karim Coulibaly, followed by another three from Horton, cut the lead to single digits. After Syracuse scraped together a few scores, Horton responded with another three, keeping the comeback alive.

Two strong finishes at the rim from senior forward Terrell Brown suddenly put the Panthers within three with about two minutes remaining. After a Syracuse miss on the other end, Pitt had a chance to trim the lead or tie. Johnson, who had an abysmal 2-12 shooting performance up until this point, let a long one fly in transition as the empty stadium held its breath.

“To come down in transition … and have the you-know-what to pull that three and to tie the game,” Capel said. “Big time play.”

The shot splashed through, sending the Panther bench into hysteria as the Orange called timeout, their 18-point lead vanquished.

“All I was thinking about is just winning, and the next shot I take was just going in,” Johnson said. “And it went in.”

The seemingly insurmountable lead had disappeared, but Pitt still had yet to take the lead. The Orange answered out of the timeout with a three of its own. Odukale hit a mid range jumper to bring the Panthers within one, and got a stop on the other end. As the clock ticked under fifteen seconds, Horton snuck to the top of the key and put up a good look at three, but the ball hit the back of the rim and took a high bounce.

With the entire game in the balance of one play, the Panthers biggest strength saved them as it had all night. Despite the shooting struggles, Pitt remained relentless on the offensive glass, pulling in 20 offensive rebounds. The last came at the most opportune time, with junior guard Au’Diese Toney tipping in Horton’s miss for the Panthers’ first lead of the game with 8.2 seconds on the clock.

“Coach Capel preached about rebounding and just crashing the board because we crashed the board on them,” Toney said. “My teammate took a shot and I was just hoping for it to go in, but at the same time you never know what circumstances would be, so I just went in for the offensive rebound. It came off and I was just right there in a good position to tip it in.”

Needing one more defensive stop, the Panthers received a gift off a bad inbounds pass and Johnson came away with the ball and got fouled immediately. After sinking two free throws, Griffin’s half court heave clanked off the side of the rim at the buzzer.

The miraculous triumph keeps Pitt undefeated on the road this season, adding on to wins at Northwestern and Miami. Like the thriller against the Wildcats, Pitt trailed for almost the entire game Wednesday, leading for a combined 14 seconds in those two games.

Capel praised his team’s persistent effort, refusing to count themselves out after slow starts, saying it’s something the team has tried to emulate from dominant Pitt teams in the past.