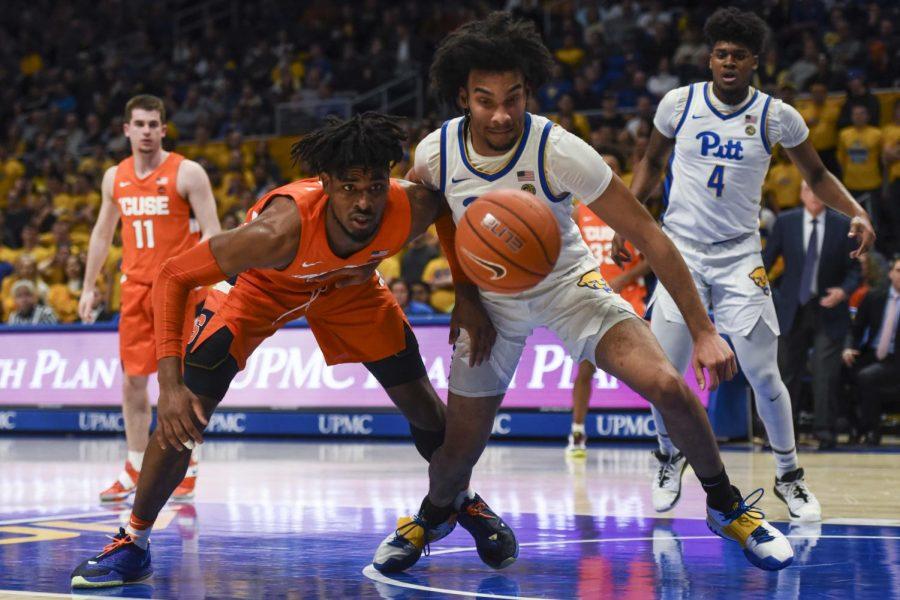 First-year forward Justin Champagnie competes for possession of the ball.

In their last game on Jan. 6, the Panthers (8-2 overall, 3-1 ACC) erased a double-digit halftime deficit to beat Syracuse (7-4 overall, 1-3 ACC) on the road. On Saturday, in its first game in 10 days, Pitt made a different kind of comeback with similar vigor. The Panthers shredded the same Orange zone defense that had given them fits for years and ran away with a 96-76 win at the Pete.

Post-game the mood was light as Capel talked about how the nerves quickly melted into excitement and fun in the wake of a blowout victory.

“It was exciting,” Capel said. “I was nervous leading up to it. There were some nerves this morning. I was anxious when I was sitting back here before the game … it was a little bit weird … because I haven’t coached a game [at the Pete] since, I think, Gardner-Webb. But it was exciting.”

Like its last matchup against the Orange, Pitt started abysmally slow. The Panthers did not score a point until the 17:13 mark of the first half and didn’t make a field goal until almost four minutes after that. Syracuse jumped out to an early 9-1 lead by the 15:12 mark of the first half.

But as soon as the first of sophomore guard Ithiel Horton’s five 3-pointers went down, the flood gates opened and the game assumed a much smoother pace. As essential as Horton’s shooting was during a rough opening period, it was Pitt’s defense and rebounding that helped keep the team’s focus and morale afloat.

“We have confidence in you. Be strong and be confident. The other thing we talked about,” Capel said. “Let’s take our defense — our rebounding, things like that — and let’s get out in transition. Let’s get the ball to Xavier [Johnson] and the rest of you run.”

A layup through contact and converted free throw shot from junior point guard Xavier Johnson gave Pitt its first lead of the game — 21-22 — with about six minutes left in the first half. A back-and-forth affair ensued and neither team was able to create much separation. The Orange entered the halftime intermission with a five point lead.

Pitt came out of halftime with renewed vitality. Again, solid defense and rebounding kept the Panthers in the game. They moved with pace up and down the floor and converted easy buckets in transition.

The slashing Champagnie took full advantage of the quickened pace. The budding star forward flirted with his third 20-point, 20-rebound game of the season before ultimately settling for 24 points, 16 rebounds and two blocks while shooting 50% from the field and 86% from the free throw line.

Capel said Champagnie had been a full participant in practice for about a week now and was expected to play in Saturday’s game just days before tip-off. Instead of the six to eight weeks that was given by Pitt, Champagnie returned in about three.

Champagnie said postgame that he is “never nervous” and that the quick turnaround didn’t surprise him. Returning to the court this soon was always his own expectation.

“I said after [the injury] that I’d have two to three weeks [out],” Champagnie said. “And after that they couldn’t keep me off of the floor. I felt good, they felt good, we all felt good.”

A quick 10-2 run by the Orange midway through the second half cut the difference to only three at one point, but the Panthers were quick with a counterpunch. Horton hit an and-one jumper, then Johnson and Champagnie contributed a pair of buckets that pushed the lead back to double digits, allowing Pitt to cruise to the finish.

The Panthers are now in uncharted waters. At 3-1 in the ACC, Pitt has earned their best start in conference play since the Jamie Dixon era and stands to move into the upper tier of a crowded ACC regular season race. Next up, they are scheduled to host a struggling Duke team at the Petersen Events Center on Tuesday at 9 p.m.