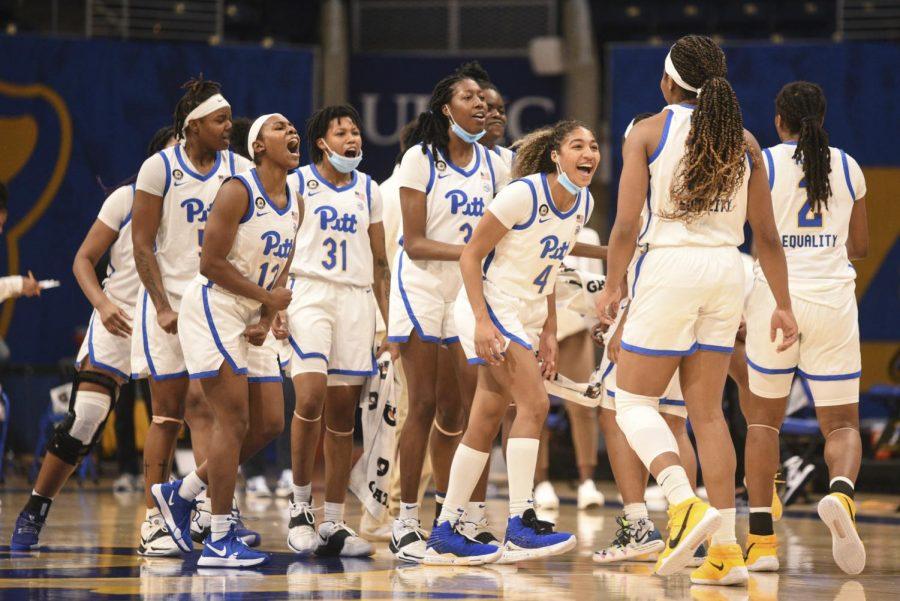 Pitt paused all team activities in accordance with the ACC’s coronavirus protocols and will not play again until at least Jan. 21.

College basketball has returned for the 2020-21 season amid the ongoing COVID-19 pandemic.

Despite the debate on whether college athletes should play this winter, and several programs either postponing or cancelling their seasons, the Pitt women’s basketball team has already completed its rather short nonconference schedule and begun ACC play. The team has steadied itself into a 3-3 record.

In the three nonconference games the Panthers played, they went 2-1 with wins against the George Mason Patriots and the Hofstra Pride. Their ACC matchups resulted in one win out of three against Clemson.

The pandemic caused a slight delay to the season, with the Panthers opening against the Patriots on Nov. 25, just under three weeks after the date of last year’s season opener. And while starting the season the day before Thanksgiving seems stressful, head coach Lance White simply expressed gratitude that his team could play basketball again.

“A couple of weeks ago or a month ago, I didn’t really believe that this day would happen,” White said after the game. “To be able to play against somebody else and for our kids to get out there and compete, I’m so excited and I’m really thankful to all the people that made today happen.”

Pitt won that game 72-57, with help from sophomore guard Dayshanette Harris’ 11 points and 10 rebounds. Junior guard Jayla Everett led both teams in scoring with 18 points of her own. Pitt’s defense stood tall aside from the fourth quarter, where George Mason outscored the Panthers 26-9, holding George Mason to just 20% shooting.

The win against Hofstra proved almost as easy to obtain as the George Mason victory. The Panther defense played this game much more evenly — allowing no more than 20 points in any quarter — but it was Everett’s 23 points that helped seal the 71-58 win. Harris also had another great game with 13 points, eight rebounds and six assists. Sophomore forward Amber Brown snagged eight boards of her own, along with two steals.

The fourth quarter of that game saw a similar attempt at a comeback by Hofstra, but the Pitt defense snuffed it out after a 6-0 Pride run. The first half scoring and the second half defense helped put the Panther team over the edge, which White credited to the team’s work ethic behind the scenes.

“We’ve shown glimpses of really good basketball,” he said after the game. “As you can see our program moving forward, that for me is huge, as that we’ve worked tirelessly as coaches and assistant coaches to put a better product on the floor.”

Pitt’s next two games would not produce the same results, though. The Panthers completed their nonconference schedule with a match against the Delaware Blue Hens. Despite 20 points by Everett and a double-double from sophomore center Rita Igbokwe, the team could not catch the efficient Hens offense. Senior Delaware guard Tee Johnson scored 13 points off the bench to secure a 85-79 victory.

The ACC opener on Dec. 10 against Virginia Tech stung the most. Strong offensive outputs from Everett and Harris led to a 32-point first quarter for Pitt. The Panthers led 48-40 after the first half, but that wouldn’t prove enough. Pitt’s offense couldn’t get going after halftime, and the Hokies outscored the Panthers 48-23 in the second half — including 25-8 in the last frame — winning 88-71.

But the Panthers bounced back from that defeat with a statement win over the then-undefeated Clemson Tigers on Dec. 13. Down 40-29 after two quarters, Pitt turned up the heat in the second half, scoring 51 points, including 31 in the final frame. Four Panthers ended up with double figures on the score sheet, and first-year forward Cynthia Ezeja snagged 11 rebounds off the bench.

Although the team’s first-half performance didn’t impress White, he said rebounding and effort made the difference in the second half.

“I thought we were really flat and just got out-rebounded and out-hustled during every part of it,” White said. “Then our kids flipped a switch and that’s what we’ve talked so much to this team about, about being able to do so in those moments and we did it today.”

The Panthers played one more game in 2020, a 67-53 defeat at the hands of the Florida State Seminoles on Dec. 20. Neither team cracked 20 points in any quarter, nor did any player reach that mark. Harris led Pitt with 18 points and senior guard Gabbie Green tacked on 11, but the Panthers turned the ball over 23 times, erasing any chance at a comeback.

Pitt would’ve played against Boston College on New Year’s Eve, followed by matchups against North Carolina, Louisville and a rematch with Clemson. But four scheduled games were postponed due to a positive COVID-19 test within the Panther roster, and the resulting contact tracing and quarantine. The announcement came just five minutes before the BC game would have started. Pitt paused all team activities for the foreseeable future in accordance with the ACC’s coronavirus protocols.

Pitt’s Valentine’s Day game against the Duke Blue Devils has been cancelled, after Duke surprisingly withdrew from the 2020-21 season. Pitt also postponed its next game with Notre Dame, so the earliest the Panthers can take the floor again is Jan. 21 against Miami.

Pitt has started well in some games but finished rather quietly. In others, it has started slowly but finished with a burst. Some of Pitt’s late hot streaks couldn’t overcome the deficit, and the late cold spells cost it potential victories. This year will tell if the team can string together some more consistent performances.