Staff Picks: Our most anticipated movies of 2021 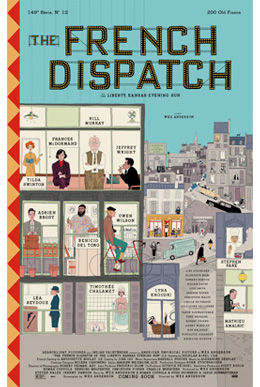 The film industry had a rough year in 2020, with the COVID-19 pandemic slowing or halting production, and companies pushing new releases to 2021. Luckily for us, that means 2021 is shaping up to be a year of sci-fi blockbusters, artistic masterpieces and whimsical animated flicks.

Everyone is familiar with “Star Wars,” Luke Skywalker, Darth Vader and more recently “The Mandalorian,” but there’s more to the space-opera genre than the light and dark sides. “Dune,” a 1965 sci-fi book by Frank Herbert, is finally coming to the big screen — the horrible 1980s attempt notwithstanding — under the helm of “Blade Runner: 2049” director Denis Villeneuve. Timothée Chalamet and Zendaya — a pair of Gen Z favorites — star with an ensemble cast featuring Oscar Issac, Jason Momoa, Stellan Skarsgård, Josh Brolin and Javier Bardem.

“Dune” tells the story of the House Atreides, a noble family of space in the far far future that gains control of the richest planet in the galaxy — the desert planet Arrakis, which produces a drug called “the spice” that aids in light-travel and life-extension. The Atreides heir, Paul (Chalamet), must navigate the deep-rooted history of the planet, its people and its politics while dealing with his house’s demise. It’s basically the epicness of “Star Wars” and the political intrigue of “Game of Thrones” combined, but with more desert and giant sand worms. For any sci-fi or fantasy fans who are up for something new, but still familiar, “Dune” is the burgeoning franchise we’ve all been waiting for.

Before “Hamilton,” Lin-Manuel Miranda created the musical “In The Heights,” which won the Tony for Best Musical in 2008. The musical is now set to come to the silver screen in summer of 2021, and I could not be more excited. We first got the trailer in 2019, but the summer 2020 release date was pushed back a year. I am so ready for this.

I am not going to say “In The Heights” is better than “Hamilton” because I do not want to incur the wrath of theater kids everywhere, but it is still really good. It’s more of an ensemble piece than “Hamilton,” following the various people living in Washington Heights, a barrio in New York City. Also, the soundtrack slaps — especially the song “Paciencia Y Fe.”

Based on the trailer and the fact that it was directed by Jon M. Chu of “Crazy Rich Asians,” this looks like it’s going to be a film with a lot of color and fun movement, like “Hairspray” or “Mamma Mia.” Not to mention the film will feature Anthony Ramos, perhaps better known to “Hamilton” fans as John Laurens and Philip Hamilton, in the lead role. This film is shaping up to be a real treat for musical fans, and I can’t wait to see it.

There isn’t an obvious stylistic similarity between author Nick Hornsby (“High Fidelity”) and director Wes Anderson (“The Grand Budapest Hotel,” “The Fantastic Mr. Fox”). Hornsby’s aesthetic is messy, a little hungover and too revealing. Anderson’s highly manicured, deeply artificial films are so instantly recognizable that there are Instagram accounts dedicated to real-world locations that replicate his sets.

But these two artists believe deeply, as Hornsby wrote in “High Fidelity,” that “what really matters is what you like, not what you are like … books, records, films.” Anderson’s films are like shadow boxes of the things he loves — Austrian playwrights, French New Wave, Owen Wilson and Hayao Miyazaki films. His characters are so exactly choreographed that sometimes he carves them out of clay himself.

“The French Dispatch” is Anderson’s 10th film. It takes all of the confectionary aesthetics of “The Grand Budapest Hotel” and “The Royal Tenenbaums” and adds an homage to The New Yorker, staged in an artificial French town. The addition of Timothée Chalamet and Frances McDormand to an ensemble of Anderson veterans feels so established that I had to check whether I had missed them in “Life Aquatic.” In short, it is a Wes Anderson movie for fans of Wes Anderson movies — like every other Wes Anderson movie.

Fans of the series will finally get another direct sequel to “Ghostbusters” 37 years to the day after the original movie was released to critical acclaim, in “Ghostbusters: Afterlife.” That’s right, it’s not another reboot. Scheduled to release on June 11, the film will feature most of the original cast, including Bill Murray, Annie Potts, Sigourney Weaver, Ernie Hudson and Dan Aykroyd. For an additional bit of chronological fun, Jason Reitman will be the director, and his father Ivan Reitman, who directed the original movies, is credited as a producer.

“Ghostbusters: Afterlife” is set 30 years after the original film, and follows a family that discovers its ties to the original movie after moving to a small town. Carrie Coon and Paul Rudd will join the original cast, as well as Finn Wolfhard. I would be excited for the movie even without Wolfhard, but after seeing his truly delightful performances in “Stranger Things” and “It,” I can’t wait. If it’s safe to do so, I’ll be in a theater on or around June 11, and if you’ve forgotten who to call in case of a ghost-related emergency, you’re welcome to join.

“Bob’s Burgers: The Movie” probably won’t launch a cultural reset in the same way that “The Simpsons Movie” did in 2007. That feature grossed over $500 million worldwide, and anyone  who attended grade school in the late 2000s remembers Homer Simpson’s “Spider Pig” song. Still, I’d never turn down the opportunity to spend an afternoon with the Belchers. In the show, loving spouses Bob and Linda Belcher run the show’s titular small-town burger shop while raising three awkward kids in the apartment upstairs — and their antics are delightful.

No plot details or trailer for “Bob’s Burgers: The Movie” have been revealed yet, even after the original theatrical release moved from July 2020 to April 2021. Showrunner Loren Bouchard revealed in November that the production team scrapped an accompanying musical short called “My Butt Has a Fever,” over concerns that audiences would find a song about butt fevers unpalatable in the time of COVID-19. Nevertheless, whether dealing with a corrupt health inspector or navigating teen friendships, the Belchers always face their problems with gaudy humor and kitschy musical numbers.