Biden, Harris have their work cut out for them, Pitt students say 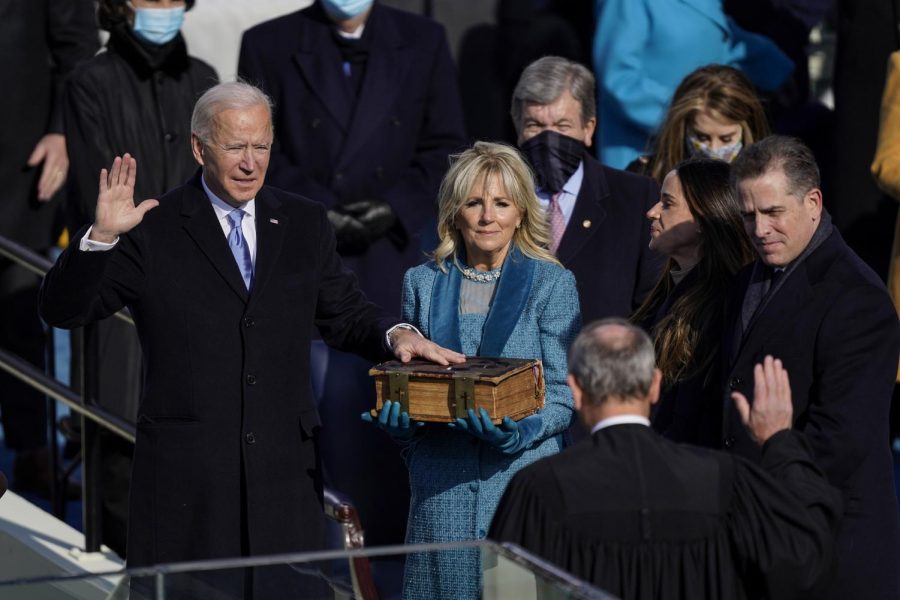 President Joe Biden takes the oath of office from Supreme Court Chief Justice John Roberts as his wife, first lady Jill Biden, stands next to him during the 59th presidential inauguration in Washington, D.C., on Wednesday. (Kent Nishimura/Los Angeles Times/TNS)

As Pitt students began a new semester of classes, a new presidential administration was being sworn in in Washington.

Joe Biden and Kamala Harris were sworn in as the 46th president and 49th vice president of the United States on Wednesday, only two weeks after a pro-Trump insurgent mob stormed the Capitol building in Washington, D.C., in efforts to overturn the election decision. Harris made U.S. history as the first female, African American and Asian American VP.

Michelle Evans, a sophomore biological sciences major, said she wasn’t surprised by the riots at the Capitol but was surprised at how easily the insurgency took place.

“The insurgents were trying to distract from, and potentially postpone, the counting of votes that would put Biden in office,” Evans said. “The police were supposed to defend the Capitol. They shouldn’t have let them in.”

Evans also said she was relieved at the promise of a new administration and Biden’s plan to take immediate action on several crises facing the nation, including the COVID-19 pandemic and a flailing economy.

“I feel safer with Biden and Harris in office — they’re working for us, not against us,” Evans said. “I felt alienated as a person of color under the Trump administration, and things were even worse in the midst of the pandemic, as many of his supporters refused to take proper precautions.”

Sophia Shapiro, a first-year legal studies major, said she was enthusiastic about the inauguration. As co-founder and president of Pitt for Biden, she spent last year supporting the Biden-Harris campaign as a solution to America’s wide array of issues, from a raging pandemic to riots over racial injustice.

“Electing Harris as vice president sends a message that we are on the cusp of change in this country,” Shapiro said. “We are all equal under the law, and it’s time our people were treated as such, regardless of skin color. We are ready to tackle issues that have long gone ignored, and we can make real change if we’re willing to put in the work.”

“Hate speech begins hate crimes, and this was our reality under Donald Trump,” Shapiro said. “I have complete faith in the Biden administration to trust scientists, administer vaccines to the public and fund protective structures that keep American citizens safe.”

Not everyone was completely convinced by the president’s words of assurance. Jermiya Gaines, a first-year linguistics and theatre arts major, said she was skeptical of Biden’s goals to “… make America, once again, the leading force for good in the world.” Her doubts were rooted in our nation’s patterns of racial tensions and police violence against minorities.

“I’m not sure America has ever been a force for good in the world, and we continually ignore our own domestic issues,” Gaines said. “We have epidemics of homelessness, poverty, drug abuse and missing children. If we truly want to set an example globally, we first must address our own issues at home.”

Gaines said although the election of the first multiracial female vice president was groundbreaking, she believes it isn’t necessarily going to mend the systemic issues that plague our nation.

“Although Biden spoke of fixing racial inequalities and establishing peace across the nation, I don’t think you can have equality without equity,” Gaines said. “I would love for our society to promote fairness between those systemically oppressed and those not.”