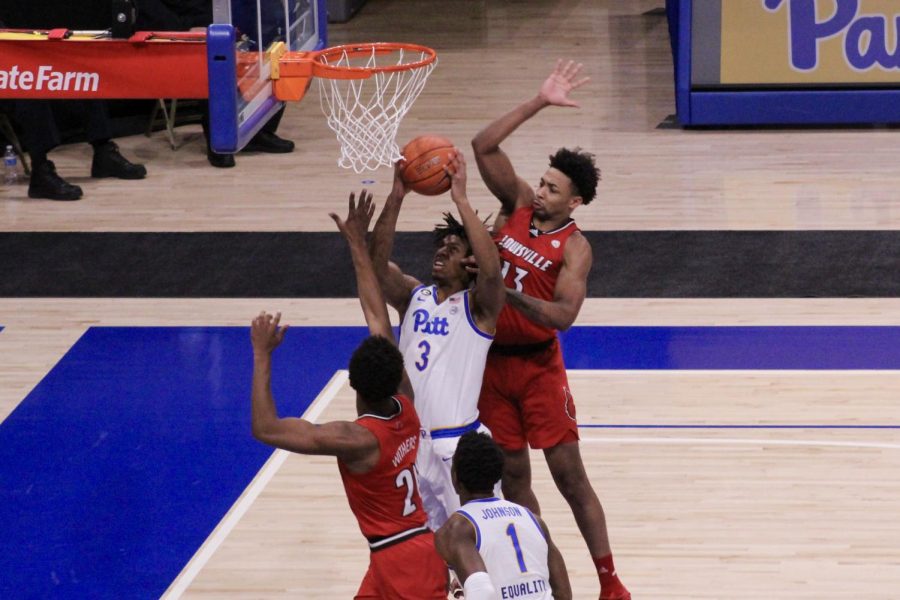 Through 20 minutes of basketball on Saturday evening, it appeared as though Pitt men’s basketball was the team its record said it was. Currently sitting at 4-1 in ACC play and tied for second in the conference standings and riding a three-game winning streak, the Panthers entered this weekend’s contest against Wake eager to continue their push toward the top of the league.

Instead, Pitt (8-3 overall, 4-2 ACC) was unable to fend off Wake Forest (4-6 overall, 1-5 ACC) on Saturday evening in Winston-Salem, North Carolina. The Demon Deacons rode electric shooting from 3-point distance to their first conference victory of the season, 76-75 over the Panthers.

A potentially game-winning jumper from junior guard Xavier Johnson went wide in the game’s final seconds, but Pitt head coach Jeff Capel said postgame that regardless of that one shot’s outcome, the Panthers didn’t play well enough to win.

“We weren’t deserving of winning, even if that last shot went in,” Capel said. “We have to be able to handle success like mature people, be hungry for more and not be satisfied. Understand what it means to show up everyday.”

Pitt had originally been scheduled to play a road contest at Boston College on Sunday afternoon, but it was postponed after a positive COVID-19 test within the Eagles’ program.

To fill this weekend’s gap, the ACC moved up Pitt’s game against Wake Forest, which had been originally scheduled for Feb. 7. In short order following Tuesday’s 79-73 win over Duke, the Panthers had their schedule altered, but the sudden change in opponent didn’t affect their play much.

For the second straight game, Pitt started fast. Against Duke on Tuesday, the Panthers scored the game’s first eight points, and against Wake Forest on Saturday, they scored the first six.

The Pitt offense moved seamlessly in the first half versus the Demon Deacon defense. They assisted 12 times on 16 made field goals and shot 61% from the field through the first 20 minutes.

Sophomore forward Justin Champagnie, only days removed from a transcendent 31-point, 14-rebound performance at home against the Blue Devils, picked up right where he left off. He hit a pair of 3-pointers on and paced the Panthers with 12 points through 20 minutes on Saturday.

But Pitt’s defense failed to contain the Demon Deacons’ tremendous 3-point shooting. Sophomore forward Ismael Massoud hit eight of his 10 3-point shots taken on Saturday night, which Capel said was the direct result of poor preparation by his team.

“Didn’t have the sense of urgency to understand scouting,” Capel said. “We were mindful and talked to our guys about them having 13 3-pointers in their last game. We knew about Massoud. These were things we talked about and worked on. There was a lack of urgency.”

In the opening period, Pitt was able to overcome Wake Forest’s shooting with efficient offense of its own. But once shots stopped falling, the Panthers went down by as many as 10 in the second half.

Then Pitt went on a 7-0 run over almost five minutes of game time that cut the Wake Forest advantage to a single possession, 72-75, with just more than two minutes remaining in the game. After a multi-shot possession for Wake Forest ran the clock down inside of half a minute, with the Deacons still leading by three, Pitt finally gathered a defensive rebound.

Johnson caught a short outlet pass and ran the length of the court. He scored to pull the Panthers within one with less than 10 seconds remaining. Johnson and first-year guard Femi Odukale combined to wrestle the ball loose from Wake’s junior guard Davien Williamson and force a turnover.

Johnson would take the final shot as time expired, but it was no good. His miss was the final blow to a kind of collapse that has become all too familiar in this era of Pitt basketball. In the wake of a massive win this past week, the Panthers were unable to maintain success.

After what was described by players as a “terrible” and “lackadaisical” week of preparation for Saturday’s game, Capel said he knew this team still has growing to do until it can reach the heights it wants to.

“We showed a lack of maturity that we haven’t shown in a while,” Capel said. “Everything about our preparation for this game led to this.”

Pitt has little time to digest and discard a devastating loss to a last-place team. The Panthers will return home and welcome the struggling North Carolina Tarheels on Tuesday night. Tipoff is scheduled for 7 p.m. from the Petersen Events Center.