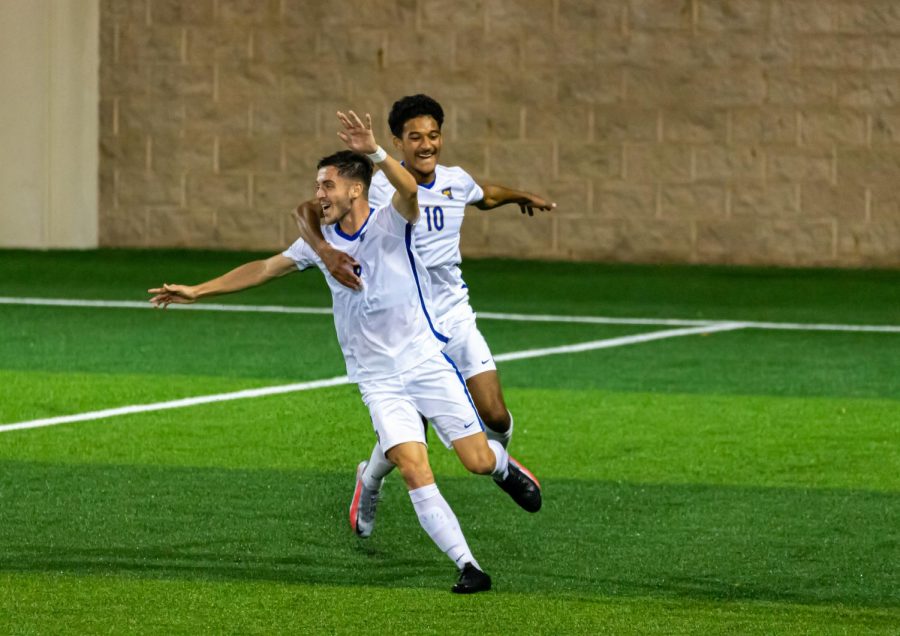 Pitt reached the No.1 ranking for the first time in program history in the fall.

After achieving many milestones in its fall season, the Pitt men’s soccer team unveiled its 2021 spring schedule on Monday, featuring an eight-match regular season slate.

Pitt's 2021 spring schedule 🗓️ is here, with the Panthers opening up against defending NCAA Champion Georgetown in an exhibition Feb. 13 at home ⚽

The team makes its return to Ambrose Urbanic Field on Feb. 13, hosting the defending national champions Georgetown Hoyas, who eliminated the Panthers in the second round of the NCAA Championship Tournament last year.

On Feb. 20 at 7 p.m., Pitt will open spring regular season play with Akron, who the Panthers defeated 1-0 in 2019 off of a late goal from now-senior forward Alexander Dexter. They’ll welcome cross-town rival Duquesne one week later in the schools’ first regular-season meeting since 2012.

The Panthers will then hit the road for the first time to play North Carolina on March 5, before hosting Boston College on March 13. Their last road matches will occur on March 19 and 27, against Duke and Virginia Tech, respectively, before finishing the season at home with Notre Dame and Virginia.

The spring season will serve as a continuation of the 2020 fall season, counting towards the NCAA tournament which will begin on April 24. Pitt dominated in the fall, finishing 7-1 with its lone loss coming in the ACC Championship to No. 2 Clemson. Pitt spent five weeks at the No. 1 ranking in the United Soccer Coaches poll, the first Panther program to reach the top spot besides Pitt men’s basketball and football.

Pitt went 5-0 against its spring opponents this past fall, defeating Notre Dame, Virginia Tech and Virginia in the regular season before knocking off Duke and Notre Dame (again) in the ACC tournament. Two of Pitt’s spring ACC opponents — UNC and Boston College  — did not meet the Panthers in the fall portion of the season.

Although the ACC Championship would normally determine the conference’s automatic bid to the NCAA tournament, changes made due to the COVID-19 pandemic have caused a new selection process for 2021. The top seeds from the ACC’s Atlantic and Coastal divisions will play in the Divisional Championship, with the winner playing ACC Champion Clemson for the NCAA tournament auto-bid.

Pitt will not allow fans to attend home games at this time because of the pandemic, with any updates to that rule to be announced in the future.