Opinion | Vote Peduto out and Gainey in 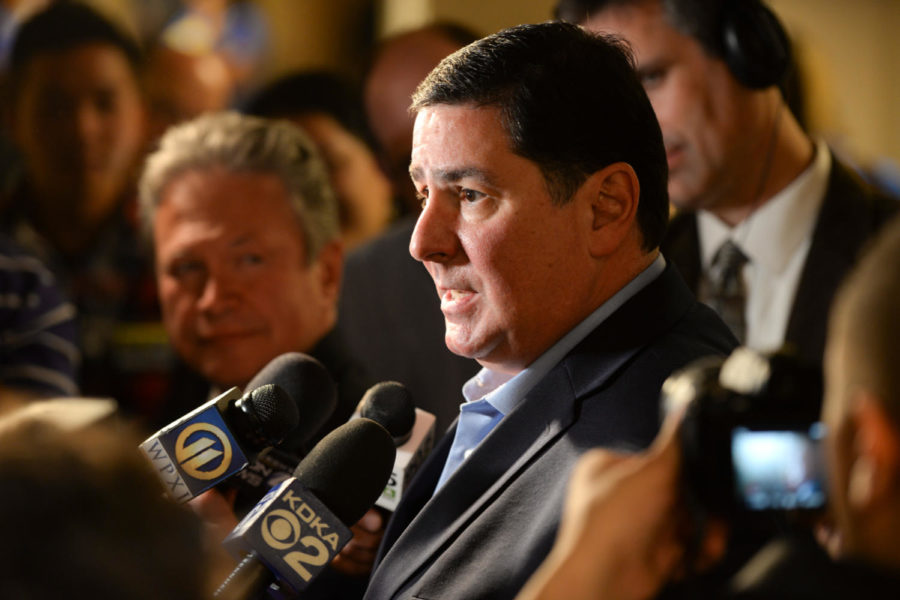 Staff columnist India Krug is critical of Mayor Bill Peduto’s response to the Black Lives Matter movement and his handling of policing in Pittsburgh.

State Representative Ed Gainey announced his candidacy for the 2021 Pittsburgh mayoral race on Jan. 19. Let’s make sure he wins.

I’ll admit it — I used to be a “Peduto girl.” I liked the styled moustache, his commitment to the environment and, yes, the bike lanes. But over the past year, he has lost his way in managing Pittsburgh’s police problem, and that is not an issue on which we can compromise.

Mayor Bill Peduto, who took office in 2013, has never been in closer proximity to the Black Lives Matter movement than he is now, and an expectation to respond to the protests has exposed his reluctance to engage with younger, progressive generations. Built by moderate Democrats and beholden to the police, Peduto cannot be expected to give the Black Lives Matter movement the political agency it deserves. That is why it is imperative we focus on electing Gainey.

Over the summer, much of Peduto’s disdain for the movement came from the Black Lives Matter protesters’ disinterest in cooperating with the police and using the proper assembly procedures. He also spoke out about his disapproval of phrases used by the movement, such as “ACAB” and “defund the police.” He thought the protestors weren’t polite enough. Red flag.

The bottom line is that there is no way to make Black liberation palatable to constituents who do not want to see it happen. But Peduto has attempted to prevent social conflict by curating his own watered-down message of unity while alienating those who took to the streets by labeling them as “the radical left.”

Racial disparities have formed two realities of life within the City. The stakes are too high to re-elect Peduto, who has the power to radically alter the City’s police force, but is afraid to.

Ed Gainey has served in the Pennsylvania House of Representatives since 2013. He represents District 24, whose population is 63% Black, and has a progressive track record that includes criminal justice reform, marijuana policies and the Black Lives Matter movement. Before then, he was involved in City government and worked as Pittsburgh’s community development specialist to implement diversity education for the Pittsburgh Bureau of Police. If elected, he will be Pittsburgh’s first Black mayor.

Gainey has been protesting with his constituents for the Black Lives Matter movement for years. He is a member of the Pittsburgh Black Elected Officials Coalition, and was one of the loudest voices for police accountability following the killing of Antwon Rose Jr. Gainey introduced a bill with Rep. Summer Lee, D-34, in 2019 that would limit excessive police force and joined students and community members in the Pennsylvania Capitol Rotunda to rally for a series of police reform bills.

This summer, Gainey spoke at a Black Lives Matter rally on the House floor to demand a special session on police reform.

“As legislators, those who have been elected to represent, don’t we have an obligation to this state to ensure that life is safe for everybody?” Gainey said.

Peduto’s policy implementations have been reactive and minor, most in response to the violence that was sparked or exacerbated by the involvement of the police,  rather than the demands of the activists themselves. For example, he said he had “serious concerns” about “pop-up” arrests after a protest marshal was taken by plainclothes police officers into an unmarked van, which left Pittsburghers scratching their heads about why police had ever used the tactic in the first place.

When I think about how Peduto has handled police reform, I am reminded of laundry day. I am often too stubborn to find a laundry basket, so instead I gather up all my clothes to take down two flights of steps. By the end of my journey, my pile has become only a fraction of the laundry load I initially envisioned, because I did not have an adequate vehicle. Peduto has had a year-long laundry day with a lack of sustainability that leads to disappointing and trivial legislative results.

In one of his first interviews as a mayoral candidate, Gainey said he wants fewer words and more action in Pittsburgh. I couldn’t agree more. Mayor Peduto, there have been enough roundtables, panels, task forces and research — you should know what you need to do.

Pittsburgh constituents have given Peduto sufficient time to prove he can rise above passivism. We’ve also been subjected to enough white men who get themselves into trouble on Twitter. Black Lives Matter was a groundswell, and the momentum deserves to be fostered into tangible change. Ed Gainey is the man for the job.

India writes primarily about politics and culture for The Pitt News. Write to her at [email protected] or follow her on Twitter @indialarson_.