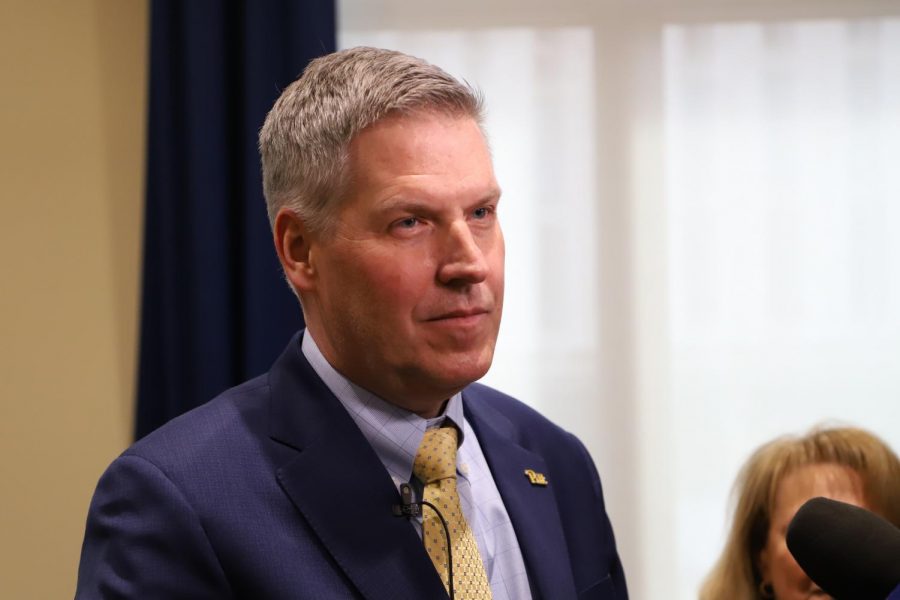 Chancellor Partick Gallagher spoke with The Pitt News about planning for the spring semester, running the University during the COVID-19 pandemic and what April graduation could look like.

After a historic fall semester of nearly all online classes, Chancellor Patrick Gallagher said Pitt is working to carry forward “what worked best in the fall” to the spring semester, which began last Tuesday, with residence halls shuttered and campus a shell of its usual self.

“We know that once we could achieve virus control, and reach equilibrium, we did pretty well through the fall,” Gallagher said. “What is tricky is, obviously, gatherings, where there’s a loss of mitigation, but also travel. And we learned that in the fall when we saw that initial bump with students arriving.”

Gallagher spoke with The Pitt News for about 15 minutes on Tuesday afternoon about the planning for the spring semester, running the University during the COVID-19 pandemic, what April graduation could look like and more. The interview was the first time the chancellor has taken questions from The Pitt News in four months, since after a mid-September shared governance meeting.

The spring semester began last week with few students on campus, after Pitt’s COVID-19 Medical Response Office decided on a staggered return for students living on campus in dorms. Residents are set to begin moving in this Friday, with three more waves set for next week on Sunday, Wednesday and Friday. The office also released guidance about sheltering in place — seven days before arrival, 10 days after — and testing requirements.

Gallagher said the delayed move-in was due to Pitt’s medical team wanting to “try to do travel when things weren’t escalating out in the community.” Both faculty and student government leaders said they supported delaying arrival.

“So a lot of thought about the holidays, in particular, those post-holiday bumps that everyone’s been talking about,” Gallagher said. “That was really the thinking behind the delayed start, was to give us enough time after New Year’s to see if we were in the middle of something like that or not.”

Gallagher added that calls that Pitt participates in with various stakeholders in the region informed the decision to push back move-in dates. He said the University’s Emergency Operations Center and COVID advisers meet frequently with “counterpart” groups at various institutions and levels of government — from chief medical officers at local health care companies to local, Allegheny County and state government officials to leaders at other Pittsburgh colleges and universities.

“Those meetings are happening, in some cases, daily,” Gallagher said. “I’m personally involved with those calls about three or four times a week.”

Gallagher added that Pitt’s emergency team also maintains a dashboard that gathers regional health care indicators, including hospitalization levels, occupied ICU beds and ventilator capacity. This information is regularly consulted, he said, including as part of the weekly conversation reevaluating where Pitt’s campuses should sit on the University’s three-tier reopening system.

“We know exactly what the health care system is dealing with and how prevalent [the virus] is around us,” Gallagher said. “There’s pretty extensive collaboration, and that’s one thing that I would say is working extremely well.”

Gallagher said Pitt “openly” shares its planning information during the stakeholder calls, and directly asked for feedback about its delayed spring move-in plan.

“In some cases we deliberately ask them, as we were on the restart, whether the timing made sense from their perspective,” Gallagher said. “We’ve been very clear that, if asked, we would adjust our timing. Our position is to be more conservative than what the health requirements are around us.”

Gallagher added that he has found officials to be “supportive” of Pitt’s planning, and said the University is “being viewed as a model for how to manage risk in an ongoing way.”

“Not to be competitive or anything, but I think as a large university in an urban setting with incredible strengths in the health sciences, we have some advantages,” Gallagher said. “They’ve been supportive, in some cases very explicitly, like with the county — no reservations on the planning. In some cases, with the state, it’s often more a case of general support and no objection. They’re not usually in the habit of endorsing any particular entity-specific plan.”

Some community members have raised concerns that Pitt is bringing back students to campus at all, given that the county and state health departments continue to report high case numbers, though lower than several weeks ago. Hospital data compiled by The New York Times point to local hospitals reaching close to their capacity — about 85% of ICU beds in the Pittsburgh area are currently occupied, compared with 80% statewide and 79% nationally. UPMC Shadyside is at 90% capacity and has 22 ICU beds remaining.

Gallagher said hospitals reaching high utilization is where communication really “matters.” He said officials from health care giants UPMC and Highmark have told Pitt that their ICU capacity “is not fixed,” and can add or remove ICU beds as needed.

“That percentage is not a very good measure of their true capacity. In fact, they have a very considerable surge capacity, and we’re not even close to it,” Gallagher said. “Those discussions are very much a part of our thinking about whether we bring back a student population into the area. We would not want to do that if it was going to stress the local health care system. But in fact, probably in most cases, this health care system has more capacity than a lot of places where students would be coming from.”

As hospitals continue to treat those with COVID-19, much attention has turned to the two highly effective vaccines approved by the federal government late last year. Pitt will partner with the county to vaccinate 800 students in “clinical-facing positions” on Thursday and Friday. It has also applied to the state to become a so-called independent vaccine provider, which would allow the University to keep its own vaccine stock and distribute shots.

Gallagher said it is very different to distribute COVID-19 vaccines than it is flu vaccines, for which the University holds a large annual clinic where thousands of people stream in to get their shots.

“There’s much more demand than there is actual vaccine. It’s kind of a just-in-time problem, right? Ideally you want to get it from the manufacturers into an arm as fast as possible,” Gallagher said.

Gallagher said if Pitt gets certified as an independent vaccine provider, then the University would like to open several vaccination sites for students and employees, but also potentially serve as an open regional vaccination center for the Pittsburgh area.

“From a planning perspective, we’re planning for demand-limited — big … vaccination centers, high throughput, seven days a week, long hours, that kind of stuff,” Gallagher said. “In the short term, we’re trying to take advantage of any vaccine availability, whether it’s from UPMC, this weekend from the county, ultimately our own, to make sure we can identify members of the Pitt community who fall into these prioritization groups and give them every opportunity to get them a shot.”

Gallagher added that he thinks the challenge will be communication due to “the huge gap between people’s expectations and desire for the vaccine and what’s actually available.”

“Hopefully that turns around. But until it does, it’s going to be very tricky,” Gallagher said. “My biggest concern is I don’t want people getting so frustrated with the early stage that they become vaccine-hesitant later.”

As the spring semester gets underway, some students starting their final semester are wondering what will happen with graduation this year. Pitt held its first-ever online ceremony last year, in place of the usual pomp and circumstance.

Gallagher said since graduation is still months away, he thinks it would be a “mistake” to declare now what the event will look like. The University asked families in an email last Friday to hold off on planning travel for graduation until further notice.

“We’re going to plan everything from a remote option to an in-person, with some hybrids in between. And then we will get at least midway through the semester before we start telegraphing what it looks like, because until then we won’t have a clear enough picture,” Gallagher said. “It’s a little bit like [email protected] — it’s super complicated to plan, because we can’t take things off the table, but I think it gives us our best chance of doing as much as we possibly can, but being respectful of whatever circumstances we face in April.”