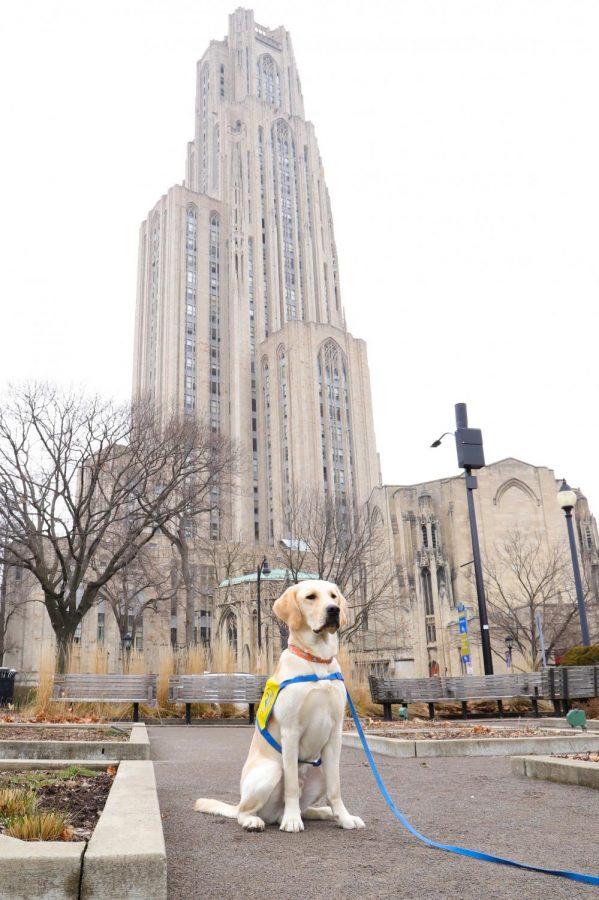 Kenzo (pictured) is being trained by senior psychology and history double major Lily Swanson to become a service dog.

Lily Swanson got a new best friend at the start of the pandemic — a half-lab, half-golden retriever puppy named Kenzo. Even though Swanson is in charge of training Kenzo, she said Kenzo is the one who has helped her this year.

“Kenzo has definitely been my bestie throughout this whole thing. He’s helped me and I’ve been able to help him with his training — it’s definitely a two-way street,” Swanson, a senior psychology and history double major, said. “I don’t know what I would do without him during this crazy time.”

Swanson has spent time raising and training Kenzo since March through [email protected], a student organization dedicated to raising service dogs through Canine Companions for Independence. CCI provides highly trained assistance dogs, free of charge, to people with disabilities. The “raisers” receive the puppies at eight weeks to train them in 31 commands and socialize them in different environments. After 16 to 18 months of time with the raisers, the puppies move on to professional training.

Currently, four students in [email protected] are raising four CCI puppies, which is an increase in the three raisers they had prior to the pandemic. They also have two “raisers-in-waiting” who hope to receive a puppy soon. But pandemic restrictions have presented obstacles to the club, since part of the training consists of familiarizing the puppies with public settings. Due to these restrictions, the [email protected] raisers have adapted their training methods so the dogs can still develop the skills they need.

Students are financially responsible for the puppies, and partly rely on fundraisers to fund food and monthly preservatives as well as spay and neuter costs. [email protected] is hosting a fundraiser at The Milkshake Factory on Feb. 3, or National Golden Retriever Day.

Tina Gargano, a senior marketing and business information systems double major, said she still wants to provide her lab and golden lab mix puppy, Koji II, with the same level of training as before the pandemic. Since Koji will still need the same skills regardless of restrictions, Gargano said the training is all about getting creative.

“I want to make sure I’m still providing him with the amount of training he knew before. Just because we don’t have accessibility to practice in public to the extent we did before does not mean he still won’t need those skills,” Gargano said. “It’s all about getting creative.”

Gargano, the vice president of the club, is currently the only raiser who has a puppy with any pre-pandemic training experience. Since Gargano started raising Koji in December 2019, the duo attended some classes and other public outings before the pandemic, which she said they are very lucky to have experienced.

“After 16 weeks of age, he was allowed to attend classes with me. Being able to get that experience that we now don’t have is very crucial, I feel like, because he had those skills down,” Gargano said. “We were lucky, in a sense, that we knew what life was like before.”

According to Swanson, the outreach officer for [email protected], half of CCI dogs get placed as assistance dogs, while others may be adopted or follow other career paths, such as search and rescue. But Swanson said no one is sure how the pandemic will affect these numbers, as the CCI pups currently graduating have still had practice in the pre-pandemic world.

“We actually haven’t seen much of the statistics from the pandemic yet,” Swanson said. “Typically, up to now, the dogs who have been continually turning in have had only a little bit of the pandemic.”

The three other puppies on campus don’t have any training experience in the pre-pandemic world, though. Casey Long, a sophomore political science major, started raising her lab and golden lab mix puppy, Adrienne II, last June. Since many public spaces aren’t open for training, Long said she and the other raisers have had fun finding creative ways at home to train the dogs.

“We’re doing a lot of activities at home because a lot of those public scenarios aren’t accessible right now. It’s a lot of creating our own scenarios of socialization, obstacle courses or settling during a Zoom call,” Long said. “It’s been a lot of fun to find creative alternatives to help train the dogs.”

Even though the puppies can’t socialize to the extent they could have pre-pandemic, Gargano said the environment of a college campus offers an opportunity for the raisers to safely socialize the puppies, which other independent raisers cannot do.

“We have a community where we could easily form a pod of ourselves where we are only going to be seeing each other,” Gargano said. “We’ll be safe and our dogs can still be socialized. If you’re an adult raiser, you don’t have that same type of community.”

Swanson said it will be interesting to see the various outcomes of the dogs trained during the pandemic.

“It’s really interesting to see certain quirks and things that he needs to work on compared to Koji, who didn’t have the whole pandemic,” Swanson said. “I think it’ll be interesting to see how the pandemic necessarily plays out with all the pups in their own way.”

Nicole Mroz — president of [email protected] who also raised her current lab and golden lab mix puppy, Noni V, since last June — said the virtual puppy classes offered by CCI during the pandemic have been helpful. Mroz is a repeat raiser — she raised Kaptain II from December 2019 to June 2020.

“It’s been so helpful for me to be attending the virtual puppy classes that our organization offers,” Mroz, a junior psychology major, said. “I think that’s been a great way to connect with the greater Canine Companions community and kind of learn more about how to best raise these dogs and what experiences and what opportunities to give them even though we can’t physically be together.”

While Mroz enjoys this virtual interaction with the greater CCI community, she also values time spent with other [email protected] raisers over weekly Zoom calls, where they talk and learn from one another.

“We’re able to have Zoom calls where we talk about our highs and lows of the week and together compare things that our pups are going through and just learn things from one another,” Mroz said. “I’m really grateful for that.”

Regardless of the training obstacles, Swanson said she appreciates the unparalleled friendships she has formed within the puppy-raising community.

“Everyone that I’ve met within puppy raising has really been some of my best friends now,” Swanson said. “It’s like a friendship, but a whole other different friendship than probably you would think, because you guys share something really unique and special that not everyone gets to have.”