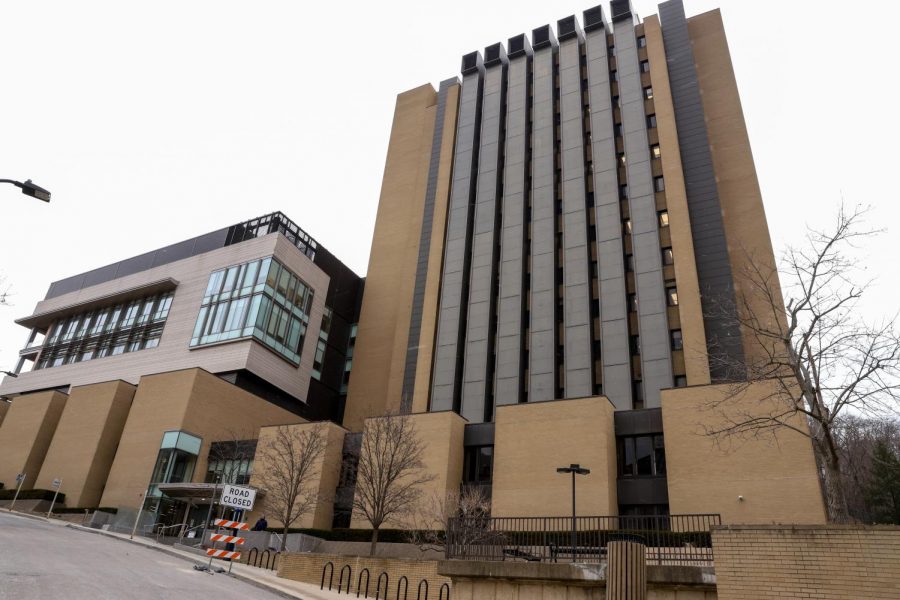 Lab classes are traditionally a way for students to have a hands-on experience, but Pitt students, like many around the world, had to make some major changes.

With [email protected] — which allows classes to be online, in-person, synchronous or asynchronous — and Pitt’s operational postures, lab managers had to figure out how to provide students with lab experience while still adhering to safety guidelines. But many students remained home or didn’t feel comfortable going into their lab classes — and not everyone has thousands of dollars of equipment in their bedroom.

Istvan Danko, a lab manager and instructor in Pitt’s physics and astronomy department, teaches a wave motion and optics lab, where oscilloscopes and lasers are commonly used in class. To overcome this challenge, Danko said he sent kits to students so they could perform smaller-scale experiments at home.

“[The lab managers] were able to come up with a small kit, which of course was not really the same as using the lasers, or equipment in the lab,” Danko said. “So for example, instead of a laser we just use the laser pointer. But [the students] could do some or most of the experiments at some level that they could at home.”

According to Danko, students had the choice to take the optics lab in person or online. The instructors paired students up, and at least one student from each pair would come into the lab to perform the experiment, while the other student watched via Zoom, according to Danko.

Nish Rajkanth — a junior biological science major, who took a microbiology lab last semester — said in an email that her class used rotated cohorts as well, since only six people were allowed in the lab at a time.

“Those who attended lab in person had to schedule when they would come in,” Rajkanth said. “Only six people were allowed to come in during one lab time so they would rotate since there were about 20 people in my lab section, so not everyone was able to go in at the same time.”

According to Rajkanth, her instructor would post pre-labs onto Canvas for students to watch and go over before class. This usually included background information and a demo video of that week’s experiment.

During class, Rajkanth and her classmates would log into Zoom, and her professor would review the pre-labs and introduce any new materials or lab experiments. The students would then go into Zoom breakout rooms to work on lab questions, Rajkanth said.

Neriah Nugara, a sophomore business and psychology double major, took a chemistry lab last semester. Nugara said the chemistry lab was also a hybrid of an online and in-person structure, and students rotated in cohorts.

“We were allowed to go in cohorts, and also you could decide if you wanted to go in or not. So, if you were in that group, depending on the week you could go in and do the lab in person,” Nugara said. “But otherwise, the lab was pre-recorded.”

According to Nugara, even though her class had the option of going in person through rotated cohorts, the majority of her class remained online.

For his modern physics lab, Danko said all of his students had to be in person due to the sheer number of experiments that were being performed and the equipment needed for those experiments.

According to Nugara, she went in person three times, but said that while she usually enjoys in-person labs, she didn’t enjoy it quite as much last semester.

“I don’t think I liked this year’s version of the in-person lab, but normally I really love in-person lab,” Nugara said. “And I really enjoyed doing hands on work, but I think it’s a lot better when it’s a lot more full, and you’re able to kind of bounce off of each other in that kind of community, and this one was a little bit more sad.”

Because some students aren’t on campus, Danko said he allowed students to come into the lab and complete the experiment at any time during the day, to accommodate those with a time-zone difference. This change allowed a pair of students to perform the experiment together, with one partner in person in the lab, and the other logged onto Zoom from China.

“Basically the lab was almost open any time, even from nine to five or so, and specifically there was one pair in the optics lab where one student was in China and you know all these labs are in the afternoon,” Danko said. “So they took advantage of switching completely to the morning.”

Danko said his main challenge is instructing his students virtually, especially in his analog and digital electronics lab, where students often work with small circuits.

“I think the main challenge is to help remotely, that’s quite hard, because you cannot really see exactly what they are doing,” Danko said. “Especially for the electronics you know when they build these tiny little circuits. It’s very hard even if you are next to the student in the lab.”

Nugara said she doesn’t think she’s learned as much as she could’ve in her lab, but she appreciates and recognizes the effort put in by the instructors.

“I feel like the teachers tried to pick up the slack in a way with the lack of lab, but I also think I didn’t learn as much as I would have in-lab just because I didn’t get that hands on experience,” Nugara said. “I appreciate the effort that they did put in because, I mean, Tamika Madison had a video of an hour up like every week, definitely the effort was there.”