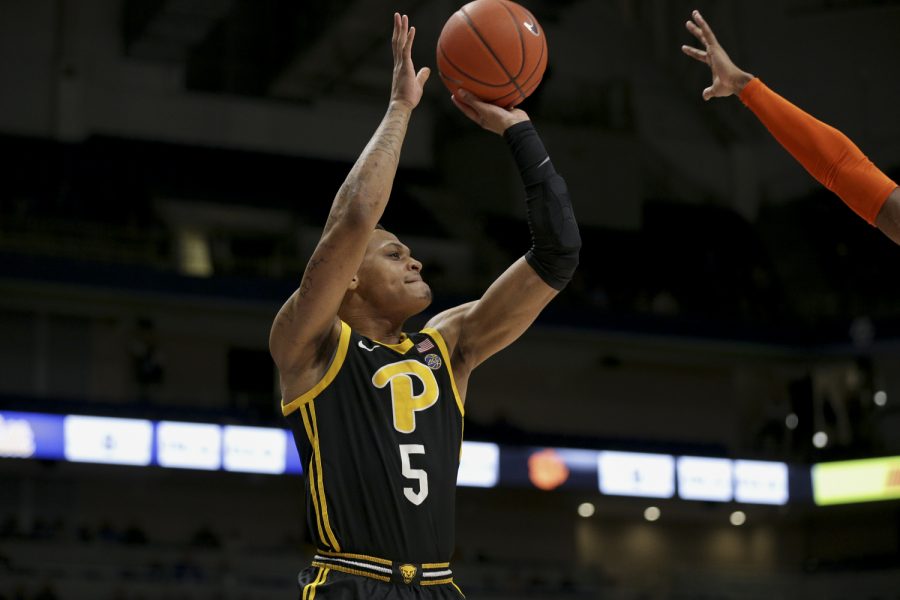 Pitt men’s basketball missed the services of second-leading scorer Au’Diese Toney in the Louisville loss and had two games postponed for COVID-19 protocols.

Heading into its first game of the New Year on Jan. 6 at Syracuse, Pitt men’s basketball faced an uphill stretch. In the two weeks leading up to that game — not originally scheduled for the Panthers — they had dropped their first home conference game to Louisville, lost leading scorer and rebounder Justin Champagnie to a knee injury that would — supposedly — keep him off the court for six to eight weeks.

They had also missed the services of second-leading scorer Au’Diese Toney in the Louisville loss and had two games postponed for COVID-19 protocols. It had not been an easy stretch of time by any means for the program, which still found itself down three scholarship players, an assistant coach and numerous managers for the trip north.

Yet the team responded on the court in spite of all of the noise off of it.

Still without Champagnie, the Panthers clawed their way from a double-digit deficit to pull ahead off a Toney tip-in with 8.2 seconds left in the game. It might have been their first lead of the day, but it was all they needed.

This team had responded to adversity before that day. The season opened for head coach Jeff Capel’s Panthers with an ugly 10-point loss at home to St. Francis (Pennsylvania), the first time in 30 meetings the Red Flash notched a win over Pitt, rated as the 10th-biggest upset in all of college basketball this season by KenPom.com.

Yet in that game’s wake, the Panthers reeled off five straight wins with dominant performances at home over both Northern Illinois and Gardner-Webb, a buzzer-beating win over Northwestern in the ACC/Big Ten challenge and a domination of a depleted Miami team on the road to open conference play. Capel felt that the team had made a statement following the win over Gardner-Webb, a tournament team in 2019.

The next two games following the last-minute win at Syracuse showed the program foundation that Capel has crafted brick by brick in his two-and-a-half seasons at the helm. Another two postponements set up a second-straight matchup with Syracuse, this time on the Orange’s home court.

The Panthers didn’t need any last-gasp heroics this go-around, juicing the Orange for a 20-point victory. They kept the pedal to the metal a few days later for the program’s first win over Duke and Capel’s former boss Mike Krzyzewski since February 2016.

The week since has not proved nearly as prosperous. After a short week in which both Toney and junior guard Xavier Johnson publicly lamented the quality of practices, Pitt showed up lethargic on defense, allowing the second-most three-pointers in a game in program history and blowing a seven point halftime advantage in what would eventually end as a one-point loss to Wake Forest — the Demon Deacons’ first conference win of the season.

Capel lambasted his team’s mental preparation and focus postgame, stating sharply that Pitt would not have deserved the win, even if Johnson’s potential game-winning jumper had found the net. The team followed that loss with a submission at the hands of North Carolina on Tuesday, in which UNC dominated the Panthers in the paint and on the boards as a bigger, stronger team that wanted it more.

It’s a narrative that has haunted Pitt teams for years and continued through the Capel era — Pitt can’t win after big games. But the narrative isn’t a myth. Per the Pittsburgh Post-Gazette’s Craig Meyer, the Panthers have 11 wins over top-40 ACC teams in KenPom.com ratings dating back to 2015. They lost their next game each time. Last season, they didn’t just take a loss in the next game, but saw their season and any slight postseason hopes unravel down the stretch, falling in 10 of their last 12 regular season games.

To use what has become Capel’s favorite boxing analogy, St. Francis knocked this team to the mat after the St. Francis loss and they got back up. COVID-19 protocols and injuries over the holiday season knocked the team down and they stood up swinging with what may hold up as their best three-game stretch of the season.

But this isn’t a three-round sparring match.

The season is a 12-round heavyweight title fight, and Pitt’s legs have buckled in as the bell sounds in the sixth. This team’s leaders, among both players and coaching staff, need to find a way to change its troubling record. Capel acknowledged that in his press conference Thursday prior to the Notre Dame matchup.

“The really good teams have guys in the locker room who understand the importance of winning and the things that go into it,” Capel said. “We’re learning how to do that. We didn’t handle last week well. Hopefully we handle it better this week.”

There’s no magic formula, there’s no easy solution. Pitt has shown it can take punches this year.

Now it’s time to stand back up and throw some in return.