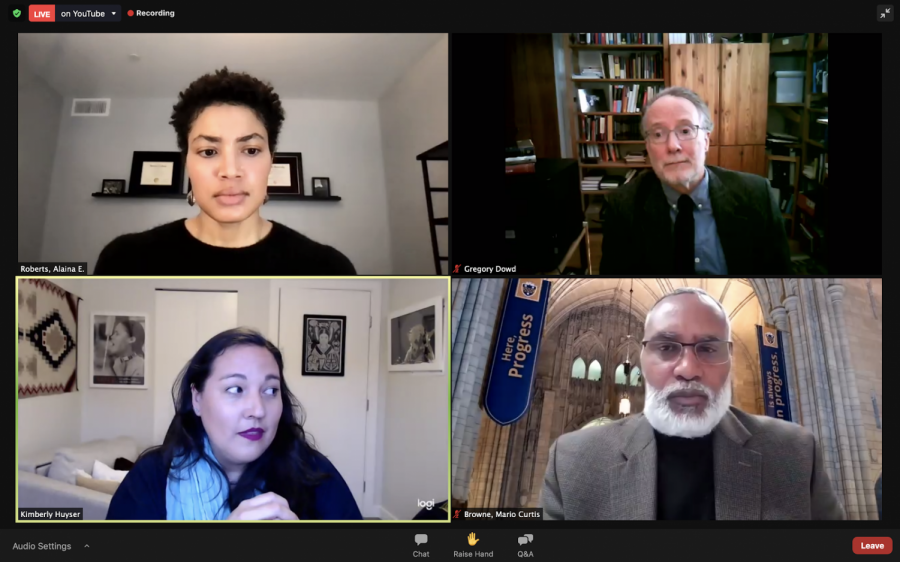 “First Peoples Past & Present: Native Health and Voting Power,” an event focusing on the history of Native people in Pittsburgh and the effect of the COVID-19 pandemic on Native communities, was hosted by Pitt’s Office of Health Sciences Diversity, Equity and Inclusion and the Office for Equity, Diversity and Inclusion on Wednesday afternoon.

For Gregory Dowd, it’s imperative that the United States — both the government and citizens — prioritize Indigenous communities. Not only has Native people’s history in the United States been lost, he said, but the large effects of the COVID-19 pandemic on the community are being overlooked as well.

“Long-standing patterns and practices in discrimination in housing, education, healthcare and employment, the stuff of systemic racism, affect public health,” Dowd, a professor of history and American culture at the University of Michigan, said. “And in a republic we, who are citizens, should be responsible for this.”

Pitt’s Office of Health Sciences Diversity, Equity and Inclusion and the Office for Equity, Diversity and Inclusion hosted a panel titled “First Peoples Past & Present: Native Health and Voting Power” on Wednesday afternoon. The event focused on the history of Native people in and around Pittsburgh, as well as examining the COVID-19 pandemic’s effect on Native communities.

Dowd, a panelist at the event, gave a historical analysis of the Native population around Pittsburgh. Dowd said “countless” Native American lives were lost due to the purposeful dissemination of smallpox into Native communities by British troops at Fort Pitt during colonial times. He added that historical effects of disease on Native populations are connected to the current health crisis.

“When you set up the conditions for malnutrition, stress, exposure, environmental degradation, confinement and exhaustion, you kill,” Dowd said. “This has direct resonance with examination of health disparities today.”

Alaina Roberts, an assistant professor of history at Pitt and the event’s co-moderator, said Pitt’s history department is located on the street named after Henry Bouquet, a colonel directly involved in the weaponization of smallpox against Native Americans.

“As a member of the history department, I am in a building on a street named for Henry Bouquet,” Roberts said. “Which, as someone who studies Native history, as a Native person, it’s very odd, very troubling.”

Kimberly Huyser, associate professor of sociology at the University of British Columbia, was also a panelist. She said while all racial and ethnic minority groups in the United States are disproportionately affected by the pandemic, Native populations are over three times more likely to experience COVID-19. Huyser added that these disparities are likely due to limitations and barriers within the social and environmental context of their communities, such lack of grocery stores, hospitals and safe water.

“There’s two primary recommendations in mitigating COVID-19 spread — there’s wearing a mask and washing your hands,” Huyser said. “One of the things I know from going up on the Navajo Nation is all households do not have running water or access to clean water.”

Huyser, who is part of the Navajo community, said at one point in the spring, the Navajo Nation had the highest COVID-19 rate in the world, and current challenges within the Native community have exacerbated circumstances. She said overcrowding in homes in Native communities has led to difficulty in safely quarantining.

“For Native communities, it may be difficult for them to practice quarantine in home, especially since they have more crowded households, so family members might be less likely to be able to quarantine,” Huyser said. “So out of home safe quarantine becomes incredibly important.”

Huyser said other barriers experienced by Native people during the pandemic include lack of health insurance in some areas, as well as limited access to in-home plumbing and telephone services. She said this forces Native people to have to leave their homes and expose themselves to the virus to obtain these resources.

“This really highlights the importance of investing in household infrastructure, especially for Indigenous peoples,” Huyser said.

The panelists also emphasized the importance of Native American voters. Roberts said even though many Americans “forget” Native communities exist, Native people played a major role in the 2020 presidential election. The Navajo Nation had an 89% voter turnout in the 2020 presidential election, which might have played an important role in President Joe Biden’s narrow victory in Wisconsin and Arizona. Indigenous communities cast nearly 60,000 ballots on reservations in northeastern Arizona in the 2020 election, compared to about 42,500 ballots in 2016.

“I think there was a moment with the election that people realized Native people are a powerful block,” Roberts said. “Look at how they swung certain states.”

Despite their importance, the panelists said people not in the community often forget about Native history and people. Dowd said one way to combat this is to look at the current practices of teaching this subject and museums.

“These acknowledgements are a good place to start, but I also think just looking into the current practices,” Dowd said. “What is in your museums, how are you reaching out to Indigenous communities that once were neighbors of Pitt?”

Mario Browne, director of the Office of Health Sciences Diversity Equity and Inclusion and co-moderator of the event, said while Pittsburgh has a “rich colonial past,” the “Native American perspective” of this history has been lost and encourages Pitt students to learn more.

“Our students, many of whom are from Pittsburgh or broader Pennsylvania, as well as the Pittsburgh community would greatly benefit from learning about the Native people who once lived here and the Native community that now calls this city their home,” Browne said.

The event also focused on the intersection of Black and Native histories. Dowd said people need to properly acknowledge the injustices of the past, including “Indigenous dispossession and slavery.”

“I am interested in the concept of responsibility,” Dowd said. “And sort of a national responsibility of our people as a nation, all of us, to try in some ways to address the wrongs of the past.”

Huyser said ways to move forward in recognizing Indigenous history include supporting more Indigenous scholars and taking other perspectives into consideration in the academic sphere.

“I think there needs to be more Indigenous and people of color across academia,” Huyser said. “But one of the things I think academia has to come to reconciliation with is their own inherent biases.”

Dowd said “this is a discussion that needs to go on,” and more must be done to recognize Native American people’s history and presence today.

“We can start by honoring treaty rights and recognizing the presence of Indigenous people in America,” Dowd said. “And their active presence and creativity and, in some cases, flourishing and celebrating that.”