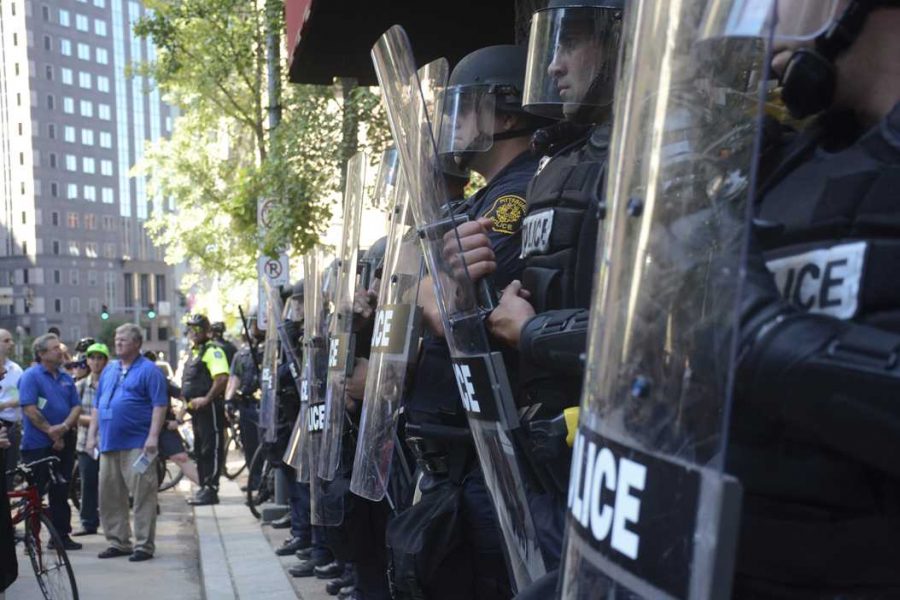 The Pittsburgh branch of Jewish Voice for Peace publicized a petition to end all training exchanges between the Pittsburgh police and Israel in November.

The Pittsburgh branch of Jewish Voice for Peace, along with other anti-Israel groups around Pittsburgh, publicized a petition to end all training exchanges between the Pittsburgh police and Israel in November. JVP is a radical anti-Israel organization that advocates for a complete boycott of the state of Israel.

While the petition is framed as an anti-racist fight for justice, its true focus is to incorrectly blame Israel for contributing to police brutality in America. The petition is filled with false assertions and demonstrates that these organizations are interested not in real dialogue about Israel or Zionism, but in promoting incendiary campaigns that employ anti-Semitic tropes.

The aforementioned petition states that “police in [Pittsburgh] are being trained to be an occupying military force” and that “these trainings are immoral and deadly.” Specifically, the petition points to three trainings that occurred within the past three years, two of which were anti-terrorism seminars hosted by the Anti-Defamation League. The ADL is a group dedicated to fighting anti-Semitism and other forms of hate.

Pittsburgh’s chief and assistant chief of police attended these two trainings in Israel in 2017 and 2018, respectively. The third, which took place in 2019, was a larger training that several officers attended.

The hyperlink the petition provides to inform readers about the 2019 training undermines its own baseless allegations of Israeli evil. The link leads to a Pittsburgh Jewish Chronicle article about the trip that notes, among other things, that Pittsburgh police and Israeli police discussed stress management techniques and community engagement. Additionally, the trainings addressed the plight of Diaspora Jews.

The petition completely ignores the content of these trainings. These experiences are clearly not the “immoral and deadly” practices which the petition accuses Israeli police of spreading.

Brad Orsini, director of community security for the Jewish Federation of Greater Pittsburgh said that “we want our synagogues, our churches, our schools, to be public buildings, open to the community and free for people to come in and worship and learn.”

Orsini also said that the Israelis’ “mental health police stress presentation … was probably the best ‘how to deal with stress on the job’ presentation [he had] ever heard in three decades.”

Clearly, the Israelis have invaluable experience and ample knowledge to impart to our police — a tremendous opportunity for Pittsburgh police especially, considering the Oct. 27, 2018 anti-Semitic attack on the City’s Tree of Life synagogue.

The petition does not accurately explain what occurs during these training sessions. The lessons that police officers learn are highly valuable for a City that has had to deal with the most deadly anti-Semitic attack in American history.

The other two training sessions mentioned in the petition were hosted by the ADL. The ADL has responded to JVP’s allegations on training exchanges with Israel before.

“Our program provides no tactical or military training whatsoever,” wrote Tammy Gillies, the regional director for ADL San Diego, in a July counter to JVP’s claims.

Gillies also noted that America has to combat terrorism much more frequently than it did in the past, which motivated the ADL to start these trainings in the first place.

“ADL saw an opportunity to help American law enforcement learn how to prevent and respond to terror attacks from those who had firsthand experience combating terrorism in a democracy,” Gillies wrote.

In these trainings, high-ranking police officers learn about the resiliency of Israelis — whose country has dealt with terrorist attacks for years — and how Israeli police cooperate with Palestinians to gain the trust of the community. Gillies wishes that JVP could see the cooperation between Israeli and Palestinian police forces.

“I wish they could see the robust conversation between two friends, the mayor of an Arab village and its Jewish police chief, who continues to work hard to gain the trust of the community,” Gillies wrote.

The petition doesn’t acknowledge any of this evidence or any of these testimonies. Frankly, blaming Israel for police brutality or police militarization in America makes no sense. America has seen allegations of police misconduct for decades, long before any police collaboration with Israel ever occurred.

The national JVP organization has acknowledged the danger of baselessly connecting American police brutality or militarization to Israel and attempted to backtrack on its own claims in June.

The group warned that “taking police exchanges out of context provides fodder for those racist and anti-Semitic tropes.” The groups involved in this petition should heed the national organization’s warnings.

Clearly, the organizations involved with this petition are not interested in facts. They don’t care about the safety of Jews around the world — they only want to demonize Israel by associating the country with police brutality in America.

Josh Beylinson writes primarily about foreign policy and domestic politics. He is also a Fellow for CAMERA on campus. Contact him at [email protected].