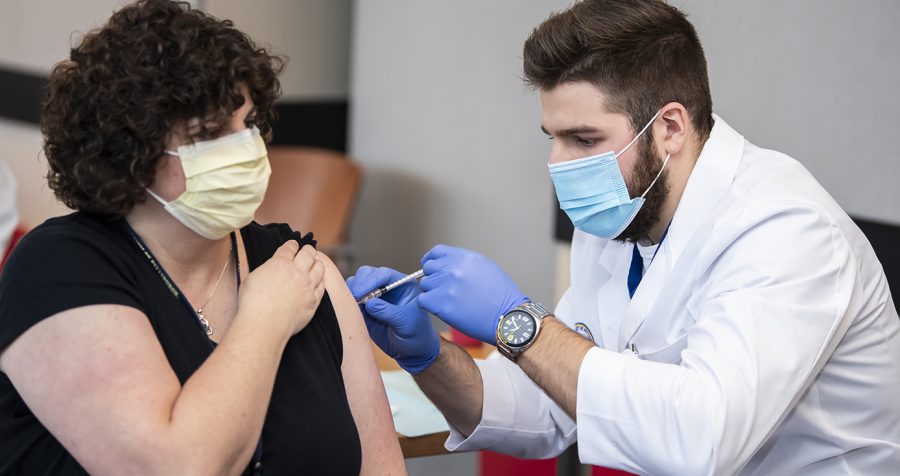 Second-year pharmacy student Jake Murawski administered his first dose of the Pfizer vaccine in December at UPMC Presbyterian, making him the first pharmacy intern in Pennsylvania to administer a COVID-19 vaccine.

Jake Murawski administered his first dose of the Pfizer vaccine in December at UPMC Presbyterian, making him the first pharmacy intern in Pennsylvania to administer a COVID-19 vaccine. Murawski was “nervous” while injecting the shot, but trusted his training.

“I just wanted to make sure I did it right because there were a lot of cameras and eyes on me,” Murawski, a second-year pharmacy student, said. “The whole time I was just thinking about putting the needle in the arm correctly, applying what I learned and making sure it was done properly.”

The experience, Murawski said, was unexpected so early in his pharmacy education, and he only found out he would get to do it the day before.

“It felt amazing, and it was very surprising,” Murawski said. “I was really shocked that I was able to do it that day, because, I mean, no one before me at our school had been able or allowed to administer vaccines.”

Pennsylvania Gov. Tom Wolf issued a waiver in December allowing pharmacy interns to administer the COVID-19 vaccine to those who are 18 years of age or older under the “direct, immediate and personal supervision” of a licensed pharmacist who has an authorization to administer injectable medications. Numerous pharmacy students at Pitt have used this new rule to administer vaccines at UPMC hospitals and clinics, including one Pitt hosted last week that vaccinated 800 health care professionals across Pittsburgh.

In order to administer this vaccine, Murawski had to undergo roughly 30 hours of training. He said the training consisted of a CPR certification, an American Pharmacists Association immunization certification and physical training with different vaccine techniques using saline solution injections.

“The work and training was grueling,” Murawski said. “But it was completely worth it because I got to do something I would have had to wait two years to do.”

For other pharmacy interns, like Amanda Kan, administering coronavirus vaccines this early in her education reinforced her goal of becoming a pharmacist. Kan, a second-year pharmacy student, administered her first COVID-19 vaccine on Jan. 12 at UPMC Presbyterian.

“When I heard the news that we would be able to vaccinate people, I was really excited because I thought it would give me more chances to practice and learn before actually becoming a full pharmacist,” Kan said. “After giving the shot myself and seeing behind the scenes, it boosted my confidence in my abilities to continue on this path.”

A common thread Kan noticed among multiple patients is that they were nervous about getting a shot. She said this is a sentiment she could relate to well.

“I’ve had many patients who are afraid of getting the vaccine for many reasons, one of which being they are afraid of needles,” Kan said. “I think I am in a unique position because I also get nervous with vaccinations, so I am able to better guide them and calm them down during the process.”

Kan added that she feels lucky to have gotten this experience and is excited to help during the pandemic.

“This experience has been incredibly rewarding, just because in the past, pharmacy students weren’t able to vaccinate people until after graduation,” Kan said. “While I didn’t expect to be given this opportunity super early, I feel incredibly lucky to be able to help out and further my learning experience.”

Pharmacy interns, such as second-year pharmacy students Alex Aubin and Jaccie Hisashima, have also given each other vaccines. After practicing giving the vaccine to each other in training sessions, Aubin ended up administering his first vaccine on Hisashima on Jan. 20 at Giant Eagle. Aubin said he thinks he did a good job and wasn’t too nervous while injecting the shot.

“I think it went really well. I drew no blood, and Jaccie didn’t seem to experience any adverse side effects,” Aubin said. “It was over before I knew it — stuck a Band-Aid on her and she continued the rest of her shift like normal.”

Hisashima said she was nervous to be the first person Aubin was vaccinating, but she did her best not to project her nerves onto him.

“Truthfully, I was a little nervous but did everything in my power not to show or portray it, just because I didn’t want to make him more nervous,” Hisashima said. “The thought of finally receiving the vaccine also loomed large in my mind, so as I continued to encourage him I was also indirectly encouraging myself to receive the vaccine.”

Murawski, who has given more than 100 vaccines since December, said it now feels more like a routine than a “nerve-wracking” experience.

“After the first few times I became more used to the process,” Murawski said. “Now I don’t get nearly as nervous, just because I have done it so many times.”

Hisashima said she never would have believed last year that she could give vaccines during a pandemic and help patients and fellow health care professionals.

“These are definitely strange times, and if you were to tell me a year and a half ago that my peer and I would be allowed to vaccinate patients as interns I would have never believed you,” Hisashima said. “It is still surreal thinking about the things we were able to participate in due to the global pandemic, and I appreciate these opportunities.”

Hisashima said it feels as if pharmacists are finally being given the respect they deserve, and it makes her proud to be working toward this career. She hopes to vaccinate patients at the clinics hosted by the University in the near future and be a bigger help to the community.

“I think the opportunity to vaccinate patients was confirmation that pharmacists can and will make a difference,” Hisashima said. “I’m so honored to be a part of that fight.”