Shifted starting lineup provides spark in 83-72 upset of No. 16 Hokies 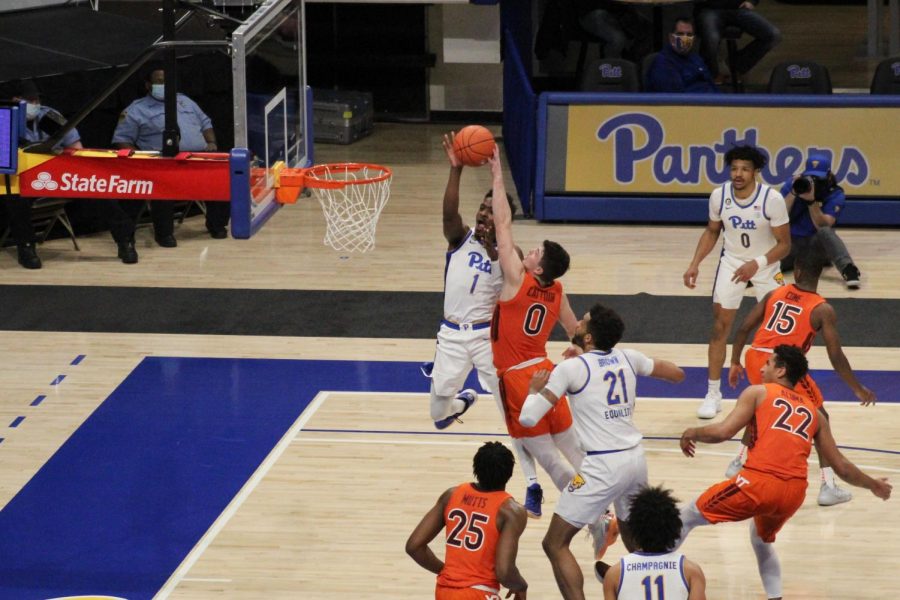 Pitt men’s basketball’s last game at the Petersen Events Center was, in head coach Jeff Capel’s own words, “embarrassing in every sense of the word.” The Panthers were run out of the gym by Notre Dame, 84-58 last Saturday and left to wonder how such a promising start has fallen so far.

But the Panthers seemed to have found the answer after rebounding in a major way on Wednesday night. The combination of a frenzied defense effort and career-high 32 points from junior guard Xavier Johnson put Pitt (9-5 overall, 5-4 ACC) over the top in an 83-72 win over No. 16 Virginia Tech (13-4 overall, 7-3 ACC) at the Pete.

But before Johnson could shine on the court, he had to sink into the bench.

Pitt’s starting backcourt of Johnson and sophomore Ithiel Horton was relegated to rarely-seen  reserve roles. Capel told his team on Monday, before their first practice following the Notre Dame loss, that he would be changing the starting lineup and players could earn a spot through their play in practice.

Capel and Johnson said Pitt’s two subsequent practices Pitt leading up to Wednesday’s game were some of their best all season. Those competitive practices did lead to major changes. Johnson and Horton, who had started every game this season for the Panthers, stepped aside as first-year Femi Odukale and senior Nike Sibande took over the starting guard positions.

But the duo of Johnson and Horton took their relegation in stride. Johnson made his first appearance less than four minutes into the first half and Horton followed close behind shortly after. Both players looked shaky at first, but clearly got more comfortable as time went on.

Horton airballed his first shot, a long 3-pointer, and Johnson stumbled on his first attempt at a drive to the basket. But after both settled in, they worked in tandem to fluster the Hokie defense.

Horton was outstanding — 15 points on 4-9 shooting on 3-pointers — but Johnson’s play was electric on Wednesday night.

Johnson made his first basket — a 3-pointer — with 11:06 remaining in the first half. Then he hit another less than 90 seconds later. Then he made a tough runner through contact moments after that. Johnson had gone from scoreless to tying the game’s leading scorer in less than three full minutes.

He showcased a full array of skills, from crafty handles in the maw of Tech’s defense, to elite speed moving up and down the court, to smooth jump shooting away from the basket. Johnson, who because of his age, experience and talent, has had to shoulder a heavy portion of the blame when Pitt struggles, said Wednesday’s minutes on the bench helped him relax and refocus, so that when his number was called, Johnson was ready to go to work.

“It’s humbling, but to me, it just helped me relax, to be honest,” Johnson said. “Because I saw what the team was doing offensively, defensively, so when I came into the game, everything came to me slow.”

The Hokies depended largely on the dominant presence their bigs created in the paint, while Pitt relied on outside shooting.

Junior forward Keve Aluma bullied the Pitt bigs all evening. The transfer from Wofford scored 12 points and gathered five rebounds through the first 20 minutes and Panther defenders were unable to keep up.

But Capel felt his team’s defense was impressive overall, and that Aluma’s numbers don’t diminish that performance.

“I thought we defended them very well,” Capel said. “Aluma … he’s a really, really good player. Seeing him on tape and I thought that seeing him live in person, he’s big-time. With the exception of him, I thought we did a pretty good job on everyone else.”

Neither team was able to gain a foothold through the first half, but the second was all Pitt.

The Hokies started the period fast, outsourcing Pitt 12-6 over the first five minutes of the second half, but a pair of 3-pointers from Horton kept the Panthers in it. Trailing by six — their largest deficit of the game — with just under 15 minutes left in the game, Pitt appeared to be on the ropes.

But just as Virginia Tech was ready to deliver a knockout punch, the Panthers countered with a devastating blow. Johnson began to further dictate the game. He pushed the ball lightning quick in transition, creating layups on the fast break for himself and his teammates.

Pitt went on a 11-4 run that lasted little over three minutes, but put them up three and killed the energy building on the opposite sideline. The Panthers wouldn’t relinquish their lead and cruise down the finish to a double-digit win, their first over a ranked opponent since Jan. 14, 2019 when they topped then No. 11 Florida State at home.

Johnson added seven assists to his career-high final scoring numbers and made four 3-pointers, the most for him in a game since he made five against Northwestern earlier this season.

Three other Panthers — Horton, junior forward Au’Diese Toney and sophomore forward Justin Champagnie — joined Johnson in double-digit point totals. To go along with his 10 points, Champagnie added 13 rebounds to complete his eighth double-double of the season.

Aluma was an uncontrollable, albeit quiet, force for the Hokies. Though he wasn’t as flashy as Johnson, Aluma also recorded a 30-point game and gathered 12 rebounds, as well. The 6-foot-9 forward also hounded Pitt from deep with four made 3-pointers.

Pitt has broken its three-game losing streak, but a brutal February schedule threatens to send them back to the conference cellar. The Panthers face another tall task this weekend when they travel to face No. 14 Virginia.