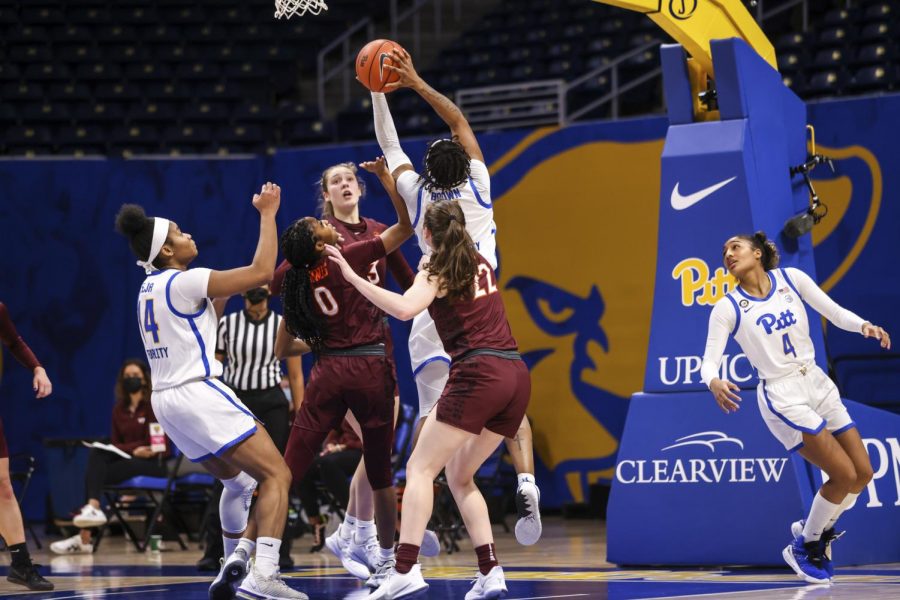 The Pitt women's basketball team lost 74-55 to the Virginia Tech Hokies Thursday night at the Petersen Events Center, now falling to 2-5 in the ACC and 4-6 overall.

Turnovers, poor shooting and a lack of discipline plagued the Pitt women’s basketball team in a lopsided defeat to Virginia Tech on Thursday night.

The Hokies had emerged as one of the better teams in the conference, with two players in Elizabeth Kitley and Aisha Sheppard that will likely earn All-ACC honors. The Panthers looked completely outmatched in the first meeting between these two teams on Dec. 10, falling 88-71.

The Hokies looked dominant right out of the gate on Thursday, shooting 55.6% from the field and 50% from 3-point range in the first quarter of play. Star center Kitley, who entered the game ranked in ACC’s top three in both points and rebounds, immediately got in a rhythm down low. Virginia Tech managed to get Kitley the ball with consistency, and she turned that into eight points and three assists in just the first period.

The Panthers failed to make a three in the first quarter, shooting just 28.6% from the field. Their cold start from the field, as well as six turnovers in the period, resulted in a 28-10 Virginia Tech lead entering the second quarter of play. Head coach Lance White cited an immature mindset as the main reason for this start.

“To start the way we did,” White said. “It shows our undisciplined mentality, and that we’re just not there yet.”

A large part of the second period brought more of the same Pitt struggles from the field, but the Hokies went cold after a quick layup to start the quarter. The Panthers strung together stops, holding Virginia Tech to just 3-13 shooting in the period, and no points in the final four minutes of the half. During this drought for the Hokies, Pitt came alive on the offensive end with a 10-0 scoring run to go into halftime down 36-25.

Sophomore forward Amber Brown provided a bright spot for Pitt in the first half, scoring six points and grabbing five rebounds, three of which came on the offensive end. But as a team, Pitt still struggled to get anything to fall, and White believed the origin of these struggles was a poor shootaround.

“I thought we had a terrible shoot around today, and it transferred over to what we did in the game,” White said. “At this point of the season, and in ACC play, you can’t. You have to have a mentality that you can do this, and win.”

Both teams shot the ball a bit better to start out the second half. Pitt continued to value the ball better than it did in the first quarter, and fought to chip away at the Virginia Tech lead. The Panthers did a nice job of limiting Kitley from utilizing her touches as effectively as she did in the first period. In a relatively efficient third quarter from the field for both teams, the Hokies managed to expand their lead by four points, entering the final period with a 57-42 edge on the scoreboard.

Pitt held its own on the glass, out-rebounding the Hokies 38 to 36, and grabbing 16 offensive rebounds. Brown led the way for Pitt with seven boards.

“My main goal was to out-rebound my matchup,” Brown said. “We knew we had to rebound. That was one of our main points coming into this game.”

Despite a fast start to the final 10 minutes of play, efficiency was far from spectacular for either team in the fourth quarter. Neither team scored a single point for almost two and a half minutes in the middle of the quarter, until Kitley ended the drought with a pair of free throws. Kitley closed out the game for the Hokies, scoring eight of her 20 points in the fourth quarter.

Star sophomore guard Dayshanette Harris came alive for Pitt in the fourth quarter. In a game where she struggled to secure the basketball, and did not see many shots fall in the first 30 minutes, she responded with nine fourth quarter points.

Harris finished with 18 total points on the night. But the struggles she had from the field and with turnovers symbolized the struggles for Pitt as a whole. Pitt had some bright spots, but its 17 turnovers and 36.2% shooting played a large part in the lopsided outcome of this game. White noted a lack of maturity after the game.

“We can’t do the dirty work yet that it takes to win in the ACC. You’ve got to have kids that will sacrifice and run the floor every time, whether they get rewarded or not,” White said. “We just don’t have those kids yet.”

The Panthers ultimately couldn’t mount a comeback and Virginia Tech won 74-55. The Panthers now fall to 2-5 in the ACC and 4-6 overall. The loss to the Hokies is the second in a row for Pitt, who will try to rebound from this performance against an excellent Syracuse team Sunday. The Orange currently sit fourth in the ACC standings, coming off a win over Wake Forest.