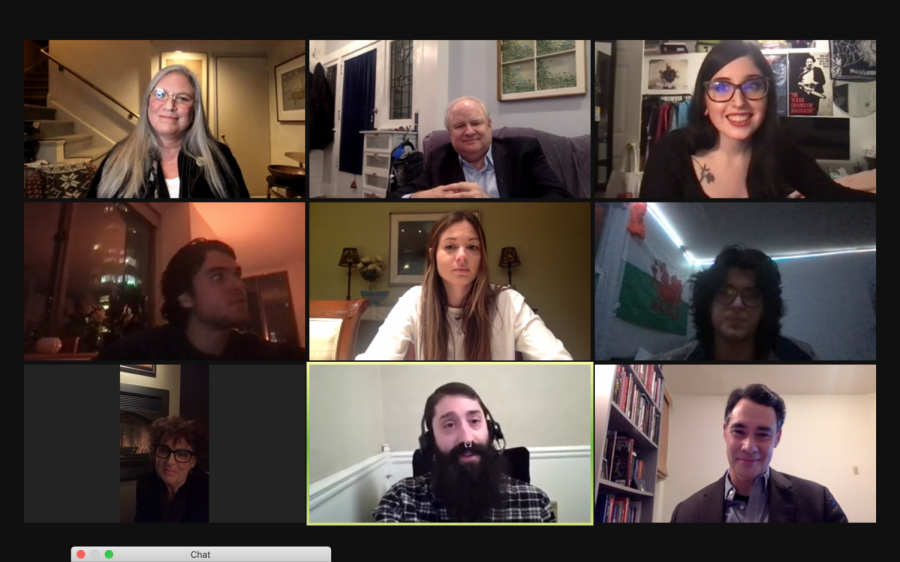 “George Romero & Pittsburgh: The Early Years,” a 45-minute documentary produced by Pitt students as part of their “Making the Documentary” course, screened in a Zoom event Thursday night. The film focused on Romero’s beginning, from his birth in Brooklyn to his move to Pittsburgh, where he found the group that would go on to be his main collaborators for his early films.

Pitt has countless departments devoted to research, from scientific stem cell experiments to historical inquiries. But for the students of last year’s “Making the Documentary” course, constructing a film can be just as valuable a form of academic research as experiments done in a lab.

The spring 2020 class, which Carl Kurlander, senior lecturer of film & media studies, taught, allowed students to hone their film production skills on one of Pittsburgh’s most famous filmmakers — George Romero. The result of the class is a 45-minute documentary, “George Romero & Pittsburgh: The Early Years,” directed, produced, written and edited by Pitt students.

The finished project screened in a Zoom event Thursday night, followed by a discussion with the student filmmakers and Kurlander moderated by Lori Cardille, star of Romero’s 1985 film “Day of the Dead.” The film focuses on Romero’s beginning, from his birth in the Bronx to his move to Pittsburgh, where he found the group that would come to be his main collaborators for his early films.

The students also worked in conjunction with the University Library System, which acquired the Romero Archive in 2019, to incorporate footage from Romero’s early films into the documentary. Adam Lowenstein, a professor of English and film & media studies and director of the newly formed Horror Studies Working Group, originally pitched the idea of a Romero documentary to Kurlander and was consulted for the film. The film showcases both scholarly research skills and film production techniques and, according to Lowenstein, is a testament to film as a tool for research.

“We don’t necessarily think about making a film as a research project,” Lowenstein said. “But I think that this is a project that really demonstrates how much making a documentary involves research and how productive that research can be.”

The students’ research took them from Romero’s early days shooting segments for “Mister Rogers’ Neighborhood” to the production of his groundbreaking 1968 classic, “Night of the Living Dead.” Often hailed as the kickstarter of the zombie horror genre, the film shocked audiences with its levels of gore and grotesqueness, heightened by the low-budget, home-movie aesthetic.

But the film was historic in more ways than one. The film’s steely-eyed protagonist Ben was played by Duane Jones, a Pitt alumnus and Black man. The casting of a non-white actor for a leading role in such a pioneering film was unconventional by 1960s standards, but it was the film’s shocking ending, in which Ben is shot and killed by an all-white militia who believe him to be a zombie, that cemented its transcendent legacy.

The movie was released in October 1968, just nine months after the assassination of Martin Luther King Jr. Although MLK died after the film’s production, Lowenstein said it was hard for his death not to have an impact on people’s readings of the ending.

“It was a big reason why the film had such a cultural impact,” he said. “Everyone who saw that film in ‘68 would be thinking about MLK’s assassination when Ben is killed … the film reminds us that the zombie threat is not so otherworldly.”

Although Jones’ performance has gained reverence amongst Romero fans and film circles, Lowenstein noted during the virtual event that Jones opted for a career out of the limelight post-”Night of the Living Dead,” taking roles in avant-garde and dramatic films such as “Ganja & Hess” and “Losing Ground” and eventually devoting his career to teaching and directing theater before his death in 1988.

In an attempt to recognize his underappreciated legacy, Suz Romero, George’s widow and founder and president of the George A. Romero Foundation, presented Marva Jones Brooks, Duane’s sister, with the foundation’s Pioneer Award in his honor.

Exploring Jones’ legacy and studying the zombie genre was a highlight for Molly Goodheart, a senior English literature major and lifelong Romero superfan. She served as the main interviewer for the documentary and described the opportunity to talk to Romero’s closest friends and collaborators as a dream come true.

“It was surreal getting to ask behind-the-scenes questions to people I have admired my whole life,” she said.

Although the class began with the assumption that the students would have access to all hands-on materials and resources for conducting interviews, the COVID-19 pandemic’s shutdown of in-person classes in March completely disrupted the class, forcing the students to improvise and trade their cameras for Zoom webcams. Laura Stravach, an undeclared sophomore, said her role as “producer” for the documentary became much more difficult with the switch to online collaboration.

“You go from being able to storyboard in person and take home footage on hard drives to being spread out at home,” she said. “It’s really hard to do really good teamwork working virtually.”

With “Night of the Living Dead” and the rest of his filmography, Romero found in horror an instrument for wielding sharp social commentary, reflecting the world’s inhumanity into his malformed night stalkers. Lowenstein pointed out his influence in elevating an entire genre from being regarded as a childish, silly endeavor to an insightful mode whose impact extends to modern-day horror films. Lowenstein, who devoted his academic career to affirming horror as a form worthy of study, said Romero created an entire cinematic language that’s still being replicated today.

“Everything we see from zombie films all over the world, they all adhere to a set of rules and themes and tropes and metaphors — they’re all speaking George’s language,” he said. “It’s really an incredible thing, that a film made more than 50 years ago still has that kind of hold on the popular imagination, and not just in this country but in the world.”