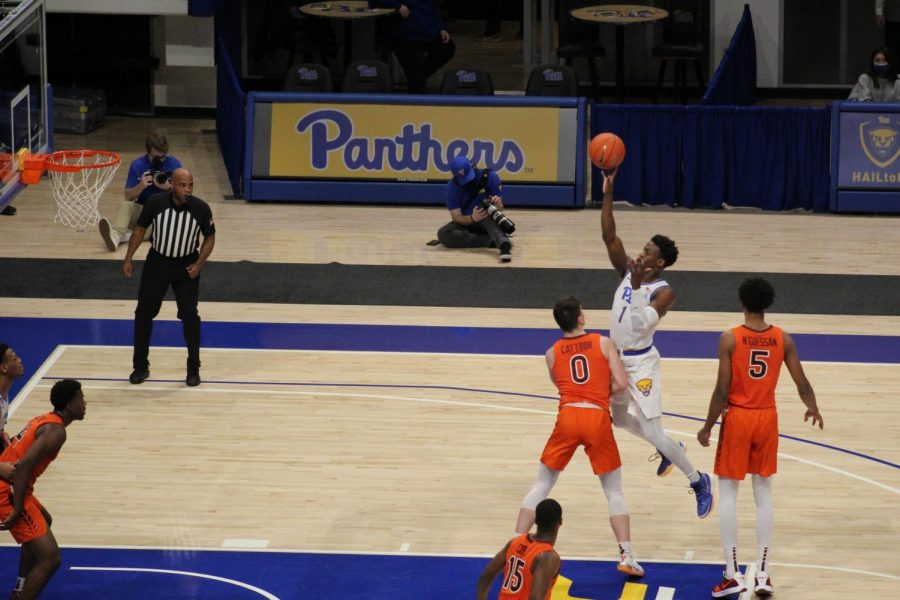 No college basketball coach enjoys embracing moral victories. Either you win or you lose and that’s the ultimate statistic you evaluate.

But Pitt men’s basketball (9-6 overall, 5-5 ACC) did have some positives to take away from its 73-66 loss to No. 14 Virginia (13-3 overall, 9-1 ACC). The Panthers hung with the ACC-leading Cavaliers — led by head coach Tony Bennett, who won his 300th career game on Saturday — for a while before UVA separated with a quick second-half blitz.

Pitt was in control for most of the game. The Panthers led for 14:28 of the first half, but still found themselves trailing at intermission.

Pitt’s frontcourt was able to pick apart Virginia’s vaunted pack-line defense with surprising ease. The duo of sophomore forwards Justin Champagnie and Abdoul Karim Coulibaly combined for 16 points and seven rebounds as the Panthers outscored UVA 18-8 in the paint.

A pair of layups from each forward helped Pitt jump out to leads as big as seven early in the first half. The Cavaliers responded well and remained within striking distance. Eventually, a 12-5 run over the period’s final four and a half minutes propelled Virginia to a 30-27 lead at halftime.

The Panthers hung with the veteran Cavaliers for a few minutes in the second half. But with 15:57 remaining in the game, the moxie that has built Virginia’s national title pedigree won out.

In the second half, Pitt continued to hang tough, but it didn’t have the stamina to keep up with Virginia’s veteran roster.

A layup from junior forward Au’Diese Toney in transition tied the game at 36. But immediately after, the Cavaliers would embark on a 16-0 run that buried the Panthers, who were unable to recover. Virginia closed the game in dominant fashion.

Junior guard Xavier Johnson and Champagnie attempted to fuel multiple comeback runs, but they all came up short. The 16-0 run was all the Cavaliers needed to put the game away.

Removed from that four-minute run, the Panthers played conference contender Virginia closely and head coach Jeff Capel was encouraged by his team’s play.

“We dug too deep of a hole,” Capel said. “We were able to fight to get back in it to give ourselves a chance in the end, but just during that stretch where it got away from us they hit threes. Their defense buckled down and forced us into some tough shots. But again, I’m proud of my guys. We thought we did some really good things in this game and hopefully it’s some stuff that we can build on.”

Pitt would not get closer than seven for the rest of the game. The Cavaliers held ACC player of the year candidate Justin Champagnie to a relatively pedestrian 18 points and 10 rebounds.

Bennett’s expert defense employed swarming double-teams to slow Champagnie’s scoring. The Pitt forward tried to pass to shooters on the perimeter out of those double-teams, but his teammates were unable to knock down many shots.

Still, Champagnie was encouraged. He was undeterred by the added coverage and felt that Pitt can still create effective offense when opponents try to shut him down.

“It kind of sucks but at the same time it is what it is,” Champagnie said. “I just thought, ‘We gotta get more movement.’ Like when I had brought a double-team — because I think I’m a capable passer out of the post — I made passes to [sophomore guard Ithiel Horton], to Au’Diese. I just feel like we can get open shots and just keep moving, flowing and messing up the defense.”

But the Panthers failed to convert on those jump shots. They made only 28% of their shots from 3-point distance.

Redshirt-senior forward Sam Hauser was dominant for the Cavaliers. He scored 23 points on 8-9 shooting from the field and grabbed six rebounds, dominating Pitt’s undermanned bigs.

Johnson was an outstanding playmaker for the Panthers. He finished with 10 points and seven assists in 35 minutes of action.

On Sunday night, the ACC announced that Pitt’s next scheduled game against Louisville, originally supposed to be played on Feb. 10, has been postponed due to a positive COVID-19 test and subsequent contact tracing within the Cardinals program.

Pitt’s next game is slated for Feb. 14 against Georgia Tech.