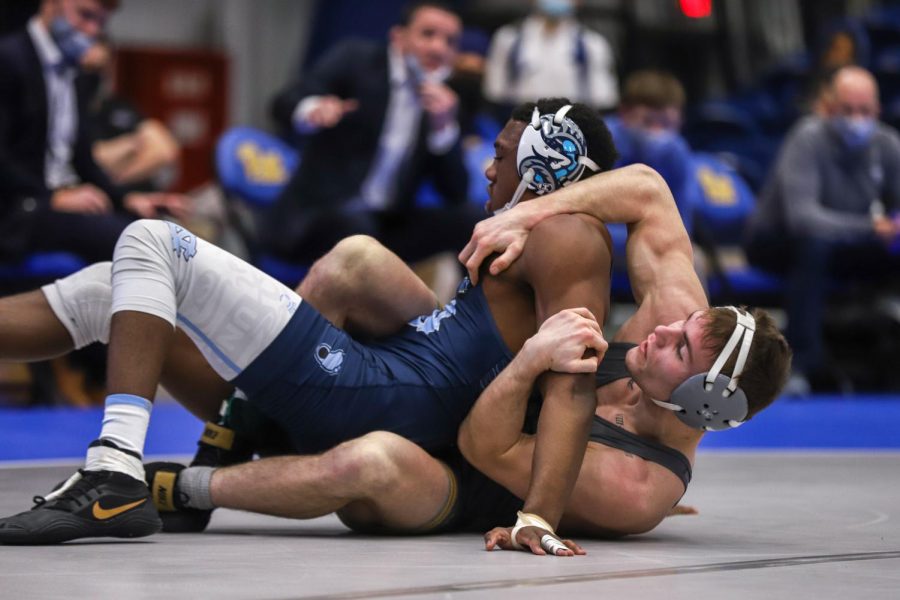 By Jason Glancy, For The Pitt News

A cold and overcast weekend was capped off with disappointment from Pitt wrestling and gymnastics. Stellar individual performances were not enough to turn the tide on any front.

No. 15 Pitt men’s wrestling lost this weekend, falling to No. 14 UNC. The highlight of the meet came when Pitt’s No. 11 Jake Wentzel defeated UNC’s No. 9 Kennedy Monday in the 165-pound weight class matchup. But it was not enough to swing the meet in Pitt’s favor and the Panthers eventually lost 23-12.

Since this was the last home meet of the season, Pitt recognized its six graduating seniors. The Panthers will finish their shortened season on the road against Virginia Tech Feb. 12 at 6 p.m.

Sophomore Emily Liszewski and junior Olivia Miller of Pitt women’s gymnastics earned themselves 3rd place podium spots at their Saturday meet in Raleigh, North Carolina, but it proved to be a futile effort as Pitt gymnastics ended up finishing fourth at a quad meet this weekend. NC State finished first, followed by UNC and Towson in second and third, respectively.

ACC rival NC State advances to 7-1 while Pitt falls to 2-5. Pitt will look for a better result against Temple on Valentine’s Day at 2 p.m.

Pitt did not end up placing for the 60-meter race or the men’s 60-meter hurdles, but Eddita Pessima took home a fourth place finish for the women’s hurdles. The meet took a turn in Pitt’s favor in the men’s 3,000, where senior Zach Lefever and first-year Luke Henseler took second and third place, respectively. In the men’s 400, Pitt senior Lonzell Feagan finished in 11th, while junior Flora Ahiarakwe finished in 13th place for the women.

In Friday’s field events, Pitt senior Noah Walker took home first place in weight with a 20.97-meter throw, and senior Kollin Smith placed fourth in long jump at 7.08 meters. For the women, three of Pitt’s own took top 10 spots in weight, with first-year Foluke Olujide-Ajibade scoring the best of the three in sixth place.
Saturday saw the mile, the 200, the 5,000 and the 4×400 relay. In field events, Saturday saw pole vault, shot put, triple jump and high jump.

The highlights of Saturday’s field events came in the men’s high jump and the women’s shot put. In the high jump, Pitt’s own senior Greg Lauray took home first place with a best of 2.14 meters. In the shot put, senior Abena Atoubi placed second and sophomore Laurel Kun placed fourth.

The Panthers next meet will be the Tiger Paw Invitational at Clemson next weekend.