Fouls and turnovers cost Pitt a close game against Syracuse 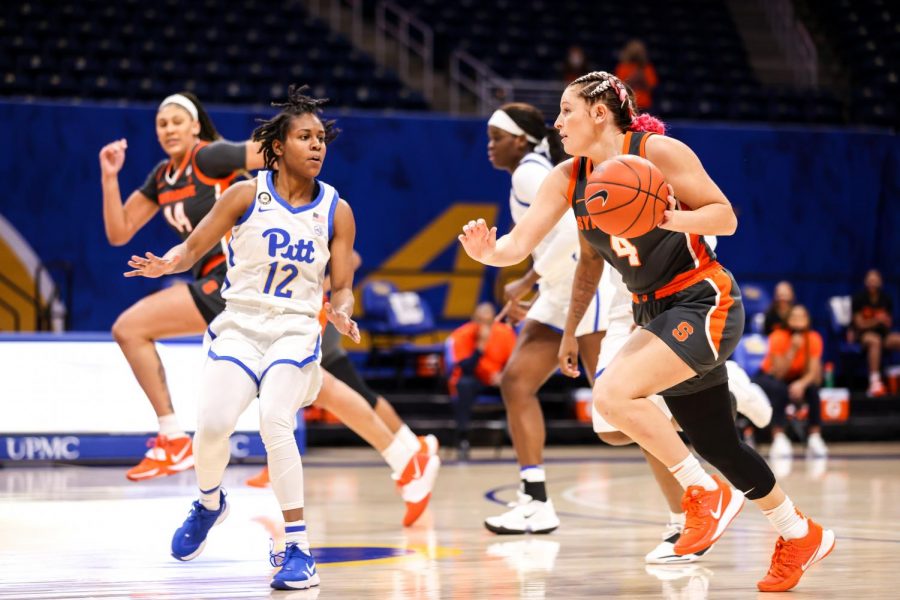 Despite a close game in the fourth quarter, Pitt women’s basketball could not bounce back at home against the Syracuse Orange on Sunday, losing 71-67. The Panthers have dropped both games against the Orange, and extended their now three-game losing streak.

Before the game, Pitt honored its senior players with video tributes and framed jerseys. Center Marcella Lamark could not attend due to COVID-19 restrictions in her home country of Brazil. But center Cara Judkins and guard Gabbie Green were on hand to celebrate their college careers. Green got the start on Sunday, but Judkins was unavailable to play, as she was for the last seven games. Pitt has not released a reason for Judkins’ absence.

Head coach Lance White had nothing but praise for Green and her leadership postgame.

“I recruited [Green] to come in and teach our kids how to work,” White said. “She’s the hardest-working kid I’ve ever coached, she comes in every day with the same attitude and she wants to win.”

In their last game against Syracuse, the Panthers turned the ball over 15 times and committed 20 fouls. They didn’t score more than 20 points in any quarter, and they lost 80-57.

But the Panthers flipped that script in Sunday’s matchup. The first quarter started with five straight Syracuse points, but Pitt quickly found its bearings, outscoring the Orange 14-1 through the rest of the quarter. Both teams could have scored much more efficiently if it weren’t for the turnovers. Pitt had eight giveaways, and Syracuse nearly matched with seven. One of those came with 10 seconds left, when Green picked the pocket of Syracuse first-year guard Priscilla Williams and finished with a layup on the other end. The quarter finished 18-6 Panthers.

The Pitt defense caused 17 Syracuse turnovers in the game, but White said postgame that he still saw room for improvement on the defensive end.

“Our kids are understanding our philosophy and the system that we have to play,” he said. “Now it comes down to that trust piece — when somebody beats you, you can’t foul them. You have to rely on the help defense.”

The Panthers took that momentum into the second quarter, scoring consecutive buckets and forcing Syracuse into a pair of quick fouls. Green had another steal that led to a bucket in the quarter, one of six turnovers for the Orange in just the first five minutes of the period. Green finished the game with 13 points on her senior night, along with those two steals.

Turnovers and fouls were the name of the game on Sunday, and the third quarter saw the Panthers commit a costly nine fouls.

Syracuse took advantage and scored 27 points, five more than it had in the entire first half. The eight-point Pitt lead became one, but the Orange did not make it easy on themselves. They committed seven fouls of their own in the period, and that kept Pitt ahead until the waning minutes.

Redshirt freshman forward Cynthia Ezeja fouled Syracuse’s redshirt senior guard Kiara Lewis with six seconds on the clock. Lewis would proceed to sink both free throws and give her team the 49-47 lead.

Green knew that the fouls cost them the game.

“That just goes with our discipline, knowing when to keep our hands off,” she said. “We sent them to the line way too early, it’s just discipline.”

The Orange now had the momentum, and they came storming out the gates with six unanswered points to start the final quarter. That was the fastest moment of the period, as the rest of the period was slowed by several fouls and turnovers. Pitt would finish with 19 turnovers and 26 fouls. Sophomore guard

Dayshanette Harris would foul out of the game.
Pitt hit several clutch 3-pointers down the stretch, including two from junior guard Jayla Everett, who finished with a team-leading 16 points. But they weren’t enough to catch up to Syracuse, who hit two free throws to seal the 71-67 victory.

“Obviously this one really hurts, I thought our kids responded [well], they prepared extremely well, and we just couldn’t finish it,” White said. “We turned it over too many times to give ourselves a chance against a great team.”

The Panthers hit the road for their next game against Wake Forest, on Thursday, Feb. 11.