‘Transnational Dialogues in Afrolatinidad’ event brings speakers together to discuss issues in gender, identity and health 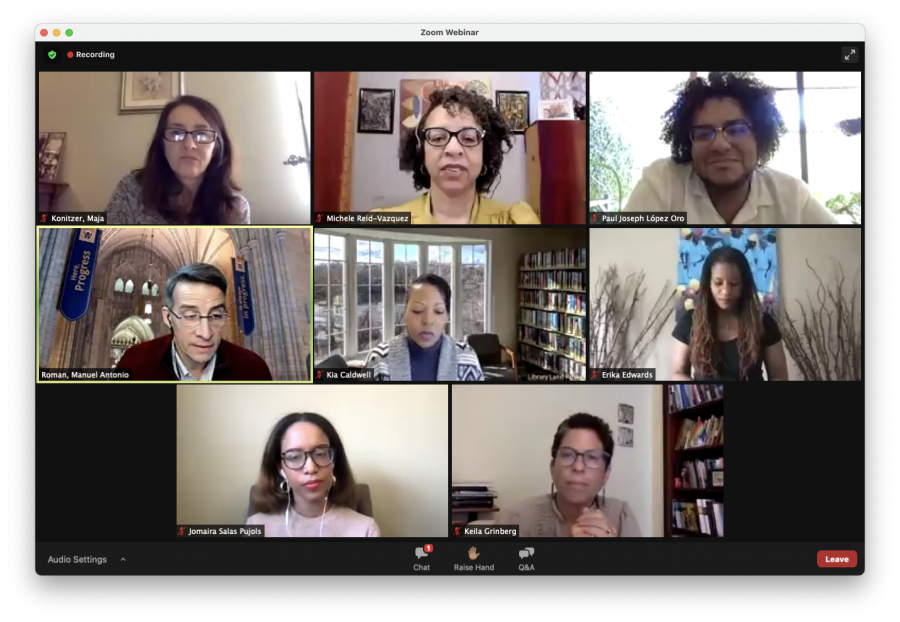 Pitt’s Global Studies Center sponsored and hosted “Transnational Dialogues in Afrolatinidad: Gender, Identity and Health” on Friday as part of a series to expand and exchange interest and knowledge on contemporary historical issues in Africa, Afro-Latino and Latin American studies.

Kimberlé Crenshaw — a Black civil rights activist and legal scholar — coined the term “intersectionality” in 1989. Years later, the term has taken over conversations about the overlap of race, class, gender and other personal traits. One of these conversations has spanned a three-part seminar at Pitt, featuring speaker Jomaira Salas Pujols, who spoke about the lack of intersectional education for youth.

“We don’t know what Afrolatinidad is, because schools only teach that there is Black, white or Latinos,” Pujols, a National Science Foundation Graduate Research Fellow and doctoral candidate at Rutgers University, said. “They don’t teach where they intersect — there are different types of Black culturally: Caribbean, African, et cetera.”

Pitt’s Global Studies Center sponsored and hosted “Transnational Dialogues in Afrolatinidad: Gender, Identity and Health” — a webinar part of a series to expand and exchange interest and knowledge on contemporary historical issues in Africa, Afro Latino and Latin American studies. Featuring educators from across the United States, the event was moderated on Friday by Dr. Michele Reid-Vazquez, associate professor of Africana Studies at Pitt, and Dr. Keila Grinberg, professor in the department of history at the Universidade Federal do Estado do Rio de Janeiro.

The first speaker, Dr. Erika Edwards of University of North Carolina at Charlotte, expressed surprise that she was invited to speak.

“I was surprised and happy to be a part of this conversation,” Edwards, associate professor of Latin American history, said. “I feel in many ways that Af-Argentina, Argentina in general, isn’t really being invited to that conversation of Afrolatinidad mainly because in many ways, we’re still screaming out.”

Edwards’ talk focused on how experiences originating in pain could lead to intentional purpose, as spaces allowed for Africans — both enslaved and free — could come together and share their stories.

“One of the things that these patriarchal corporations would ultimately invest in were these communal gatherings and spaces,” Edwards said. “These would be one of those social gathering points upon which not only pain was shared but purpose was manifested.”

One of many ways people uplifted one another in the Black community was by press. Edwards said the Black press, or El Afroargentino, continues to see its manifestations through the organization Diafar. Feminism has become one of the conversation pieces, along with neoliberalism, in the Black press today, according to Edwards.

“Racial inequalities are really built into the structure of Brazilian society, and it’s something that has influenced health,” Caldwell, professor of African, African American and Diaspora Studies at the University of North Carolina at Chapel Hill, said. “The national census did not include racial categories for much of the 20th century, so that made it very difficult to prove that racism and racial inequalities existed.”

Caldwell wrote a book in 2017 titled “Health Equity in Brazil,” where she goes into depth about race-conscious health policies and their emergence in parallel with affirmative action policies for the Black population in Brazil. Caldwell said the impact of Black Brazilian women has been unparalleled. At the forefront of health and reproductive justice activism in Brazil, these women have focused on issues such as STD prevention, domestic violence and HIV/AIDS prevention, research and psychological support.

According to Caldwell, COVID-19 has affected Brazil severely — Brazil comes just after the United States in total deaths, with more than 200,000 Brazilians dead due to the virus. But within Brazil, Caldwell said the distribution of COVID-19 deaths among pregnant women was much more heavily skewed toward “Pardas” — brown women or women of African descent — than “Brancas” — white women.

“There has been a lot of concern about treatment access, testing access, protective mechanisms to prevent spreading the virus,” Caldwell said.

She ended her talk by provoking her audience to think about the question, “What does the U.N. Decade for Afro-descendants (2015-24) really mean in the context of COVID-19 and ongoing state-sanctioned genocide of Black communities?”

Paul Joseph López Oro, assistant professor of Africana Studies at Smith College, spoke about the formulation of Indigenous Blackness in the Americas and the queer politics of the Garifuna community in New York — home to the largest population of Black Caribs, or Garifunas, outside of Honduras. Garifuna are descendents of an Afro-Indigenous population of the Caribbean island of St. Vincent.

López Oro closed by emphasizing the importance of spreading culture. Casa Yurumein in the Bronx is just one community space that centers Garifuna history to prevent the notion of loss of culture for generations born in the United States.

To speak about Afro-Latinx youth identity, Pujols spoke about some of the stories she’s heard as a youth worker for the Sadie Nash Leadership Project, an after-school program serving high school-aged girls and gender-expansive youth of color. Giving girls the language to name their experiences, Pujols noticed a change in the Afro Latino girls who were in the program.

“I noticed throughout my years of time there that, while many of the sort of Afro Latino girls who started the program started by self-identifying as Latina or maybe as a particular nationality, so Dominican or Puerto Rican, after being in the program for some time, a lot of them adopted this term like Black Latino or Afro Latino,” Pujols said. “They centered the role of Blackness in their life.”

The narratives surrounding Black people as the “colonized subject” are narratives sanctioned by scholars and academia, Pujols said.

“I remember almost every article that I read when I was an undergrad really put out this narrative that Latinx people do not self-identify with Black or white, that they are a raceless race, that they see themselves as an in-between racial category,” Pujols said.

Her research question, and what she considers her “life question,” led her to conversations with these young girls to see what was underneath that identity that changed the way they identified themselves. Pujols said the youth did not have the language of Black not because they don’t identify with it, but because they have been denied access to it.

Pujols vividly recalled a conversation she had with Nami, a 15-year-old Dominican American.

“She told me, ‘When I think about the way I’m treated at school, I was always treated like my African American friends … like I was overly disciplined and overly watched,’” Pujols said. “By purposefully aligning herself with African American peers, she saw herself as a Black subject. She continued, ‘Yeah, I can be Latina, but I can also be Black because race is about how we’re treated.’”

Like the other speakers, Pujols encouraged the audience to pay attention to the role of the state, the role of colonial interventions and the role of school-based punishment systems.

“I suggest that, when we take for granted the context upon which a pan-ethnic Latinx identity emerges, we do away with our responsibility to dismantle structures of Anti-Blackness,” Pujols said. “If, instead, we paid attention to the spaces where Afro Latinidades celebrate and historicize, then maybe we can envision different modes of engagement and we can replicate or cultivate other spaces where young people can see Blackness and Latinidad as compatible.”