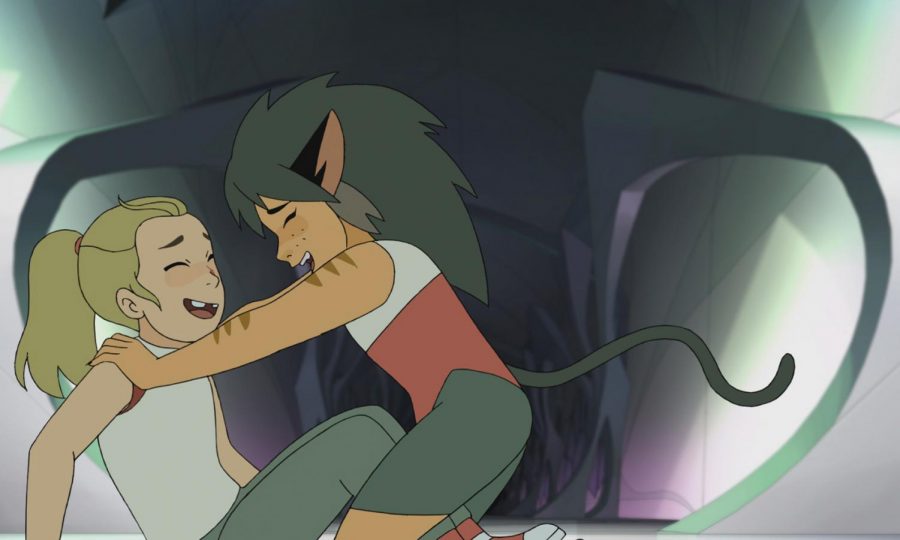 Adora and Catra from the show “She-Ra and the Princesses of Power.” (Netflix/TNS)

Let’s face it, the COVID-19 pandemic has made dating an absolute nightmare. Why would we spend hours swiping through dating apps — only to have an awkward, socially distant date in a public park — when we can live vicariously through our favorite fictional characters? We wish our real-life romantic encounters were as steamy, passionate and endearing as these couples’ fictionalized relationships.

No, you are not reading this wrong, this does say Hannibal Lecter and Will Graham, and yes they are canon. Welcome to what I swear is a serial killer dating show, complete with homoerotic references to Achilles and Patroclus of the “Iliad” and a shameful amount of flirting with your therapist.

“Hannibal” is a great show because of the relationship between the titular character Hannibal Lecter and FBI consultant Will Graham, who spends much of the series under Lecter’s psychiatric care. Their relationship has problems out of the gate, since Hannibal is a cannibalistic serial killer with a penchant for manipulation and sadistic tendencies. But so is Graham — he just hides it better. The series’ three seasons revolve around Will’s evolution into a killer of his own, something he’s always feared but did not embrace until he met Lecter. As the series goes on, Hannibal and Will each fall in love with the only other person in the world who understands them. Though they don’t embrace this relationship until the latter end of season three, the tension absolutely crackles between them whenever they’re alone in a room. No one should aspire to their relationship by any means, but it’s philosophical, it’s poetic and there is so much yearning you’ll actually start rooting for them to get together already. Hannibal asked Will once, “Where does the difference between the past and the future come from?” And well, Will’s answer pretty much sums it up. “Mine? Before you, and after you.”

Not many couples can withstand family feuds, mental health crises, countless breakups and multiple prison sentences — some served separately, some served in the same cell. Ian and Mickey survive all this and more, although just barely. The first season of “Shameless” — which follows the Gallagher children as they grow up in the South Side of Chicago — establishes the first inklings of romance between Ian and the rough, greasy, deeply closeted Mickey. Their relationship matures as they do, moving from purely physical to deeply emotional and, at times, surprisingly domestic. But both characters, having grown up in tumultuous households, struggle to be vulnerable with one another. Their shared take-no-crap attitude both strengthens and threatens their relationship, which frequently becomes volatile. This, combined with Mickey’s father’s violent homophobia, means the pair are on-again and off-again for the majority of the show. But although they often butt heads, no one understands Mickey better than Ian and vise versa.

Adora and Catra (“She-Ra and the Princesses of Power”) // Megan Williams, Contributing Editor

After being raised in The Horde, an evil army set on conquering the planet Etheria, Adora realizes that she is one of the bad guys. When she touches an ancient sword, she becomes She-Ra, Princess of Power. Vowing to do good, Adora joins the Princess Alliance — but Catra can’t make herself abandon the only home she’s ever had. Over five seasons, the two battle it out, though friends and foes alike remark on the rather obsessive nature of their supposed hatred. It takes a long time, but when Catra realizes that a physical place is not her home — Adora is — she sacrifices everything to protect her. Their story culminates in one of the most epic love confessions ever seen — I can’t hear the phrase, “So please, just this once, stay!” without crying.

What’s a drama about surviving a plane crash without a dose of sexual tension? Released last December, “The Wilds” is one of Amazon Prime’s newest original drama series and one of my latest obsessions. The story follows eight high school girls trying to survive on a remote island after their plane goes down on their way to a summer retreat in Hawaii. The plot is enticing and the characters are akin to the complex teenage girls of today, but I wouldn’t be lying to you if I said I focused most on the tense-turned-tender relationship between main characters Toni Shalifoe and Shelby Goodkind.

From the moment they crash on the island, Toni and Shelby’s personalities clash. Shelby, a religious country girl who grew up competing in beauty pageants, can’t understand why Toni struggles to control her anger. Toni, an openly gay foster kid who moves from home to home, is turned off by Shelby’s overwhelming positivity and religious beliefs, under the assumption that she disapproves of her sexuality. In the beginning, the two swap sassy remarks and often butt heads over survival strategies. But as the season progresses, Shelby allows herself to forget the social pressures that constricted her freedom of expression off the island, and Toni allows her softer side to emerge. Looks of frustration are replaced by longing stares as viewers question whether the two ever actually hated each other to begin with. Although never verbally stated, it’s clear the two have a special bond — one that didn’t survive the plane crash, but was formed because of it.

Let’s end on a classic — literally. Though “Emma” has been adapted multiple times for the silver screen, and even inspired the beloved teen movie “Clueless,” it all started with a novel by Jane Austen, in which the titular Emma Woodhouse — “handsome, clever and rich” — takes to matchmaking to alleviate her boredom. Enabled by her wealth, beauty and charm, Emma doesn’t intend to get married and instead meddles in the life of her best friend, Harriet, an orphaned girl of low social standing whom Emma hopes to lift through the ranks of society by means of marriage to a wealthy bachelor.

Mr. Knightley is Emma’s neighbor (and also happens to be her brother-in-law — yikes), and he is the only one who ever challenges her decisions. He is level-headed and steady — in contrast to Emma’s boisterous, youthful abandon — and when she makes several ego-driven blunders, he is quick both to call her out and to comfort her once she has seen the error in her ways. Although Mr. Darcy is, of course, Austen’s most popular leading man, I personally find Mr. Knightley to be even more swoon-worthy in his efforts to help Emma address her flaws, while still adoring her despite all of them.