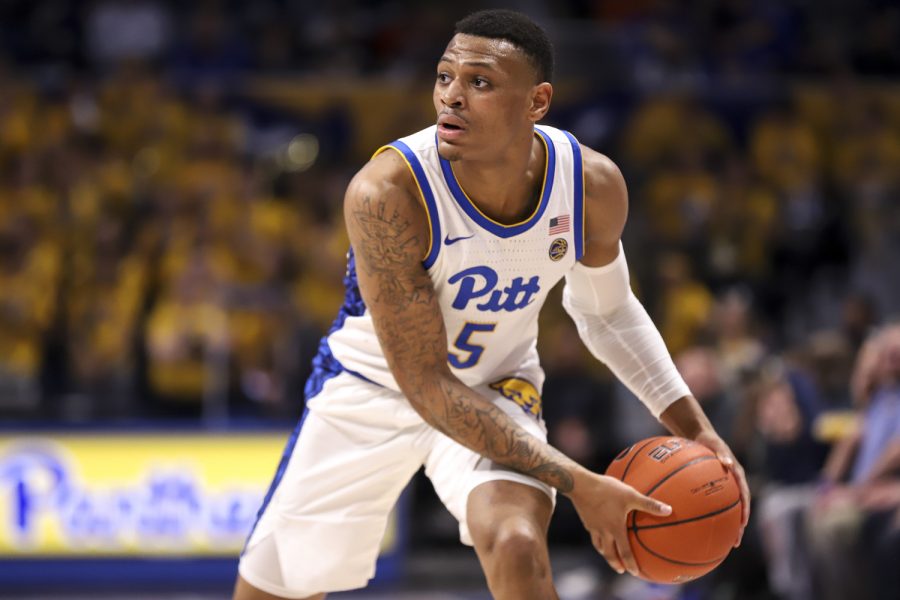 The Pitt Panthers and Georgia Tech Yellow Jackets will compete as the No. 8- and No. 6-ranked teams in the ACC, respectively, this Feb. 14.

By Eddie Lasker, For The Pitt News

The Pitt Panthers and Georgia Tech Yellow Jackets will square off as the No. 8 and No. 6 teams in the ACC standings, respectively, on Sunday at 4 p.m.

Neither team comes into this Valentine’s Day matchup with realistic hopes of a national tournament run. Georgia Tech (9-6, 5-4 ACC) had a marquee victory against No. 20 Kentucky early in the year, but even earlier losses to Georgia State and Mercer stained an otherwise solid resume.

Pitt (9-6, 5-5 ACC) suffered even uglier losses to Wake Forest, and relatively unknown St. Francis. Panther fans want to see the revitalized program turn the corner, but an inability to put away bad teams prevents the Panthers from becoming a legitimate tournament darling.

With not much more than pride on the line, expect a hard-fought battle between two evenly matched squads to take place at the McCamish Pavilion on Sunday.

Georgia Tech currently sits tied for second in points per game in the ACC, so Pitt will have to bottle the defensive lightning it found in its win against Virginia Tech. If the Panthers can force the Yellow Jacket offense into multiple turnovers, they can dominate in transition.

Elite commanding officers lead both teams into battle. The dynamic duo of sophomore forward Justin Champagnie and junior point guard Xavier Johnson anchor the Panthers. Champagnie, an ACC Player of the Year front runner, leads the ACC in both scoring and rebounding. Johnson paces the ACC in assists and serves as the Panther’s emotional leader.

Senior forward Moses Wright and senior guard Jose Alvarado compete fiercely for the Yellow Jackets as well. Wright, a defensive stalwart, ranks in the top five for steals, blocks and rebounds in the ACC. His partner in crime, Alvarado leads the conference in steals and has slipped into the top five in scoring and assists.

With such elite, top-tier talent on both sides, the role players will become the X factor. The Panthers’ bench rotation has gotten even shorter as the season has gone on, with the loss of Hugley and regression of senior forward Nike Sibande and first-year forward William Jeffress.

The lone bright spot off the Panthers’ bench has been first-year Femi Odukale, a strong guard with a knack for getting to the basket. The change of pace he brings to the Panthers’ offense provides a crucial spark in scoring droughts, but his 43.6% rate from the free throw line makes him a liability in late game situations.

The big men for the Panthers will also need to step up for Pitt to have a chance at winning this game. Often plagued by foul trouble, sophomore forward Abdoul Karim Coulibaly and senior forward Terrell Brown need a statement game. If they can keep Wright off the offensive boards and eliminate second chance points, the Panthers gain a significant advantage.

Georgia Tech is also a starter-heavy team, with only three bench players logging minutes in its 82-80 win over Notre Dame. This could prove detrimental, as the Yellow Jackets must play two conference games with little rest before facing the Panthers on Sunday. They’ll host the defensive juggernaut of Virginia on Wednesday, followed by a trip to Death Valley to face the Clemson Tigers on Friday.

Pitt, on the other hand, will have a full week of rest, following its loss to No. 9 Virginia on Sunday. The Panthers were scheduled to play Louisville this Wednesday, but that rematch has been postponed due to a positive COVID-19 test and contact tracing in the Louisville program.

The Panthers will come out the gates fired up. When they play focused and together, the Panthers are one of the best teams in the country.

Expect Pitt to play inspired basketball after the hard-fought loss to the Cavaliers. Champagnie is due for a scoring outburst, as he’s scored below his average in the Panthers’ last three games.

Champagnie thrives on elite matchups. When tasked with guarding Duke forward Matthew Hurt, he completely dominated the highly touted sophomore on both sides of the court.

With the Louisville game postponed, Pitt now enters a manageable part of the schedule after playing two top-20 teams in a week — it has no scheduled games remaining with ranked opponents. If the Panthers can follow the sage wisdom of head coach Jeff Capel and “understand what it means to show up everyday,” this should be the first in a long string of victories.