Satire: The love-hate relationship between Pitt fans and Pat Narduzzi 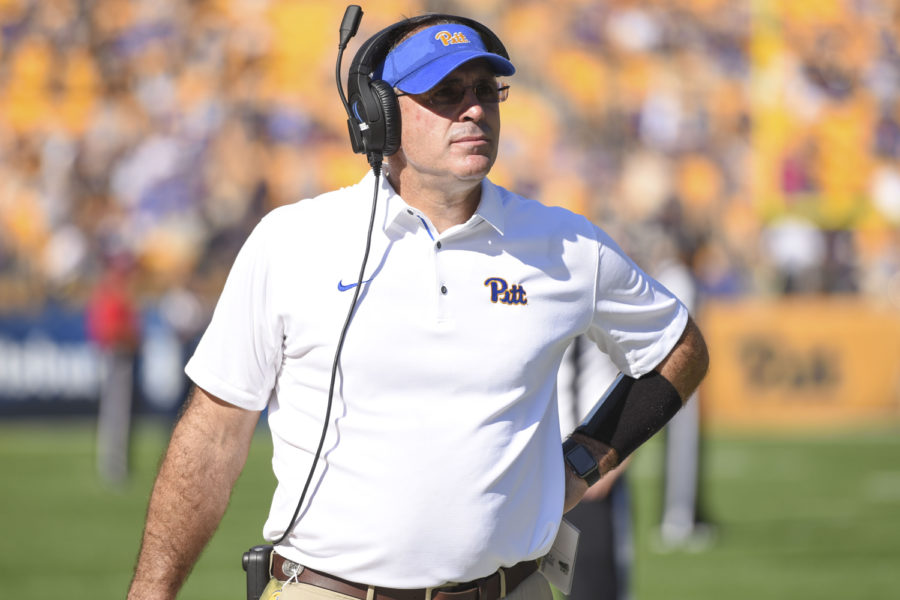 We all know the pair. Those high school sweethearts from your hometown that never seem to maintain a consistent relationship status, yet at times appear inseparable. They annoy their peers with public displays of affection in the hallways, but rant about their disdain for each other in group chats the next day. While this hot-and-cold treatment might appear unpredictable, its routine and repeated changes give the relationship an ironic kind of consistency.

As Pitt students, we can probably think of these affairs taking place on campus right now, whether it be a roommate’s on-and-off fling or your own. But the most exemplary case in Oakland has taken place in front of our own eyes, and  in fact we all happen to be a part of it — the love-hate relationship between Pitt football head coach Pat Narduzzi and Panther Nation.

Pitt didn’t officially go out with Narduzzi until December 2014, but it’s important to understand the duo’s relationship history that brought them together. Pitt fans had endured some rocky affairs in the years prior — ending stints with Dave Wannstedt, Mike Haywood, Todd Graham and Paul Chryst — so they desperately hoped to find something long term.

If Pitt football was “The Bachelor,” Narduzzi swooped in as the fan-favorite candidate that sported a fierce resume. The then-Michigan State defense coordinator had played a huge role in the No. 5 team’s 11-2 season in 2014, and had earned the Broyles Award the year before, presented to the nation’s top assistant coach.

And it immediately seemed like the right choice. Narduzzi and the Pitt fanbase reached a honeymoon stage very early on. The enthusiastic leader produced an impressive 8-5 record and a top-25 ranking in just his first season at the helm, something the Panthers hadn’t accomplished since 2010.

But it wasn’t just Narduzzi’s record that gained him popularity. He brought a captivating style of confidence, making bold decisions and shunning analytics as a blue-collar, grind-it-out model that Yinzers could get behind. After Pitt narrowly escaped Atlanta with a three-point win over Georgia Tech, a reporter brought up the team’s questionable defensive performance, in which they gave up 376 yards on the ground.

“All those stats are for losers,” Narduzzi said. “All that matters is the ‘W’.”

Gutsy decision in a tie game by Pat Narduzzi. It pays off. pic.twitter.com/eZQaHxmwYn

Narduzzi’s second year brought along lots of sentiment for the fanbase as well. The team got off to a beautiful start, defeating arch-rival Penn State in the schools’ first meeting since 2000. Pitt fans loved their head coach’s disrespect towards the Nittany Lions, from his postgame quotes to sophomore wideout Qadree Henderson’s description of what made the win special.

At the end of the year, the Panthers shocked No. 2 Clemson on the road. Who could forget Narduzzi’s odd communication of confidence before kicker Chris Blewitt handed the Tigers their first loss to an unranked opponent since 2011?

Like all long-term relationships, though, the immaculately sunny days wouldn’t last forever. After going 16-10 in his first two seasons the Narduzzi train hit a rough stretch, stumbling to a 5-7 record that left Pitt out of bowl festivities for the first time in 10 years. That campaign seemed off from the start, barely escaping Narduzzi’s alma mater Youngstown State in the opener, before giving up 49 first half points to Oklahoma State.

But in true Narduzzi fashion, the team put together a surprising performance to keep the head coach off the hot seat. After a horrible Thursday night performance against North Carolina, and a pathetic goal-line sequence to lose in Blacksburg, Pitt somehow managed to spoil No. 2 Miami’s undefeated season in its final matchup. Narduzzi left Heinz Field that day with positive momentum for the future and the emergence of his trusted lead for the next three years — first-year quarterback Kenny Pickett.

Pitt athletic director Heather Lyke rewarded Narduzzi with a whopping seven-year contract extension just a couple of weeks after the Miami win. Riding the high of the upset, Pitt fans supported the decision, despite the Panthers coming off of a losing season.

DAILY TWITTER POLL:
Should Pat Narduzzi get a contract extension?

Narduzzi carried that momentum into a strong 2018 campaign. Despite receiving a miserable home beatdown from Penn State, the Panthers turned the season around by taking advantage of a weak Coastal division. While Pitt’s 7-7 final record certainly didn’t look all too impressive, fans got to see their Panthers represented in the ACC Championship for the first time since the school joined the conference.

That positive feeling didn’t last long the next year. In quite possibly the worst moment of Narduzzi’s career, the team’s upset bid against Penn State fell short because of a fourth-quarter goal-line debacle.

Narduzzi’s decision not to run the ball on three chances from inside the Nittany Lions’ 1-yard line, and then attempt a field goal instead of going for a game-tying touchdown, left Panther fans dazed and confused. Narduzzi didn’t seem like the same guy that made gutsy decisions in years before.

Narduzzi doubled down on his decisions afterwards, saying he had “no regrets” about the call and that he wanted to move on from the loss. Communication is key to any relationship, and to Narduzzi’s credit, he acknowledged the fanbase’s anger directly.

“I apologize to Panther Nation because we all wanted to win that game, and there’s nobody that feels worse about that than the guys in this room,” Narduzzi said.

Although he tried to extinguish the flames, Narduzzi couldn’t talk his way off the hot seat. The Panther’s loss to Penn State landed him in the No. 5 spot of College Football News’ “hot seat rankings.” Their messages to those coaches: “Win, or else.”

And Pitt did just that. Narduzzi followed up his Happy Valley nightmare with a thrilling upset over No. 15 UCF. Instead of screaming at Narduzzi for his late-game decisions, Pitt fans celebrated his unveiling of the “Pitt Special” at the perfect moment.

Pitt learned its lesson. From the worst play call I’ve ever seen to one of the best. Good for Narduzzi. Good for Pitt.

The Panthers put together another solid season, finishing 8-5 with a win in the Quick Lane Bowl, but it again raised the question — is good good enough? Should Pitt fans expect more than consistently above-average seasons?

Now, after a 2020 campaign that felt like it had much more potential than the final result, Pitt still faces the nagging thought of doubt surrounding Narduzzi and his staff. While some fans appreciate Narduzzi’s time in Oakland so far, many have run out of patience. Will this relationship end decades from now in blissful harmony, or is Pitt delaying an inevitable, nasty looming breakup?