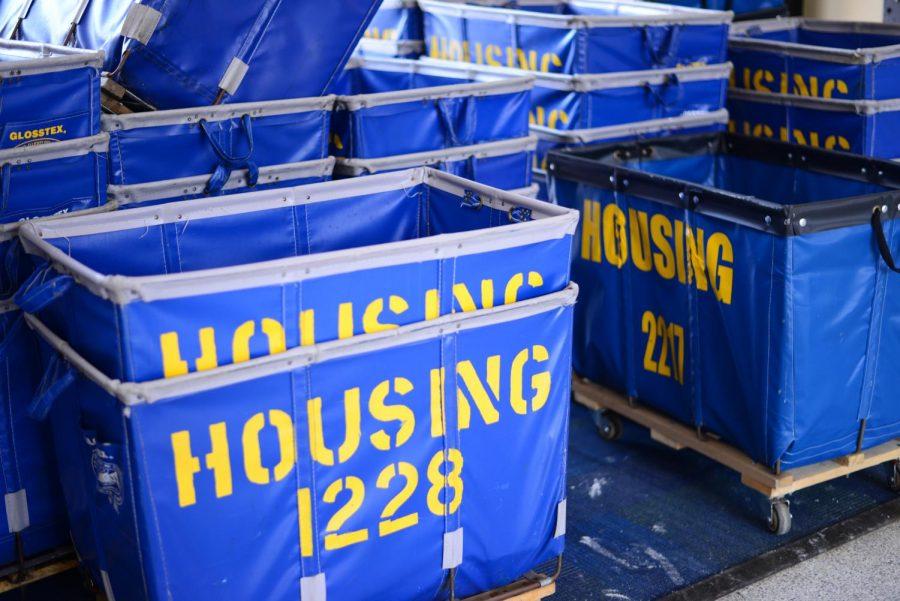 Pitt said roughly 4,800 students have moved into University housing for the spring semester as of Monday. These residents were grouped into one of four move-in dates — Jan. 29, Jan. 31, last Wednesday or last Friday.

By Suln Yun, For The Pitt News

When Kelly Xiong told her parents she was moving back to Pittsburgh for the spring semester, they were concerned because of the City’s high level of COVID-19 cases at the time.

“When I told my family that I was moving back for this semester they were pretty worried being that Pittsburgh is a city and all,” Xiong, a first-year economics and political science double major, said. “COVID-19 was like their only concern, but other than that they were fine with me leaving.”

But Xiong said she decided to come back to her room in Bruce Hall on Jan. 25 because living in a dorm gives her more freedom.

“I wanted to come back to campus mostly because of FOMO. I didn’t want to miss out on any of the college experience,” Xiong said. “I think my favorite thing about living on campus is the freedom and always being near your friends. Also, it is too hard to focus [at home] and be productive.”

Xiong is one of 4,775 students who have moved into “University-managed” housing for the spring semester as of Monday, according to University spokesperson Kevin Zwick. These residents were grouped into one of four move-in dates — Jan. 29, Jan. 31, last Wednesday or last Friday.

Zwick said Pitt welcomed 390 new students into University housing this semester. But he also said 1,165 students moved out of on-campus housing in the fall and won’t return in the spring. There were 6,700 students in residence halls at the beginning of the fall semester.

Zwick added that Pitt implemented a number of mitigation rules in place to keep students safe while they moved onto campus. Students were also advised to shelter in place at least seven days prior to moving in and required to have a negative COVID-19 test. Pitt provided free at-home tests to students from Quest Diagnostics.

“The University’s health rules remain unchanged from Fall 2020, focus on face coverings, maintain 6 feet distance, and frequent hand washing,” Zwick said. “Panther Central has returned to its 24/7 on-site service. We have a staff of well-trained team members that are happy to help our students and community as needed.”

Emma McKibbin, a sophomore linguistics major who currently lives in Irvis Hall, said her experience with the at-home COVID-19 test kit was ”quick and painless.” She sent in her COVID-19 test to Quest on Jan. 12 and got the negative result back the next day. But McKibbin said she was concerned about students’ ability to collect the sample properly.

“I don’t exactly doubt the testing process — I’d like to think that, if someone genuinely thought they’d contracted the virus, they would take the test honestly — though I also have to admit, it would be pretty easy to take your sample incorrectly, whether intentional or not,” McKibbin said. “Pitt insisted that students get tested through Quest so that the results would be automatically sent to them.”

McKibbin received an email from Pitt on Jan. 13 notifying her of her Jan. 29 move-in date. She said she made sure to quarantine at home for seven days before returning to Pittsburgh. McKibbin added that while it was easier physically to move in with less belongings to carry, some students in Irvis Hall had issues with the new electronic locks in their residence halls when they first arrived back to campus.

“Since most of my stuff remained on campus, it was a lot easier to move in,” McKibbin said. “However, it was definitely not as structured as the fall, likely because most people aren’t moving in for the first time. Over break, they changed the locks in our building and though the locks to my room work fine, other people on our floor have been having trouble getting into theirs.”

Daniel Temmallo, a first-year political science and public and professional writing double major, also said his spring semester move-in process was less organized compared to the fall, but he successfully moved in.

“Compared to moving in during the fall semester where it felt much more orderly, preparing for spring move-in felt a lot more chaotic,” Tammallo said. “But when I walked into Sutherland though, a worker asked for my Pitt Peoplesoft number, pointed me to a cart, and wrote down the number. That was it. Easy as pie.”

Temmallo added that his at-home COVID-19 testing process was “easy,” and he received his negative result within a couple days.

“I expected my results to be delayed a day or two due to high volume, and I’m glad they weren’t,” Temmallo said. “I showed my test to my roommates, who wanted confirmation prior to move-in. But nobody asked to check specifically as I moved in. Certainly a reliable process, though.”

For Kai Cunningham, a sophomore psychology major, spring move-in was far easier than the fall.

“The move-in process was different in that there was not as much luggage and furniture to move in,” Cunningham said. “I also didn’t have to reactivate my Panther Card this time, though I have heard from some of my floormates that they’ve had trouble with their cards.”

Cunningham had more COVID-19 regulations to follow than just Pitt’s, though. As a Tennessee resident, they returned to campus a day earlier than their scheduled move-in date to Lothrop Hall on Jan. 31 to comply with COVID-19 regulations and weather conditions. According to the Pennsylvania Department of Health, out-of-state residents traveling to Pennsylvania must either have a COVID-19 test within 72 hours of arrival or quarantine for 10 days before entering.

“Due to the Pennsylvania travel regulations and my parents’ status as essential workers, they wouldn’t have been able to get a hotel room since I live out-of-state,” Cunningham said. “There was also a forecast for snow on that day, which could have led to icy roads and dangerous driving conditions.”

Cunningham said despite these hurdles they are ready for a semester on-campus — even with a large course load.

“This is my first semester taking a full 18 credits, so losing a whole day for move-in didn’t seem super doable,” Cunningham said. “Being on campus has a huge positive influence on my productivity for schoolwork. It’s a lot easier to focus on my work when the people around me are also students.”