‘Can I hook up with this boy?’: Couples navigate relationships, sex and COVID-19 safety 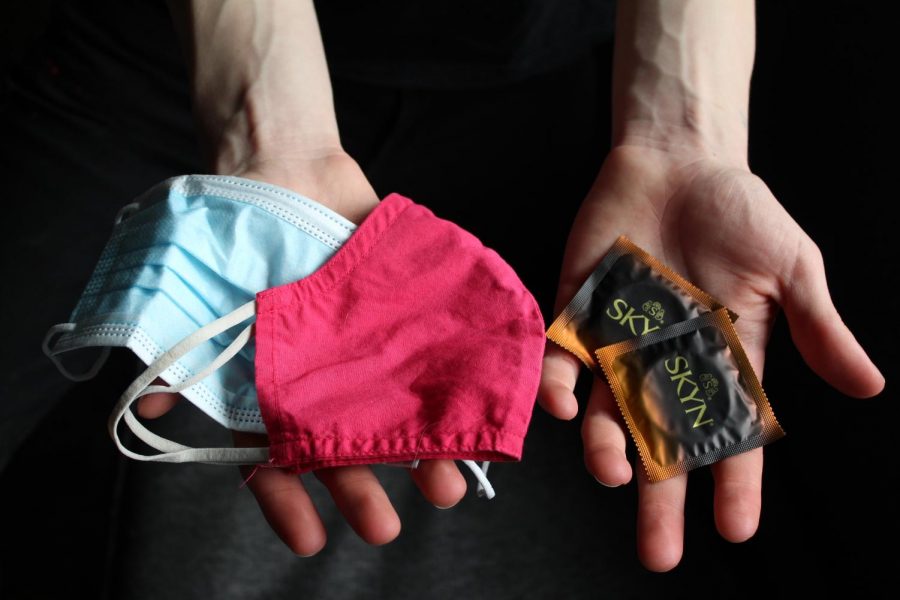 Because the United States is celebrating its one year anniversary with the COVID-19 pandemic very soon, many Pitt students have encountered a wide array of relationship experiences, including being long distance, quarantining together, breaking up or “dating” around.

Safety precautions have been ingrained into our minds during the COVID-19 pandemic — wash your hands, wear masks, socially distance — but things can get complicated when you want to meet “the one,” hang out with your significant other or engage in activities that aren’t so socially distanced.

Randi, a sophomore who asked to be identified only by her first name, said she and her boyfriend had thrown around unconventional ideas — such as wearing masks or not kissing — in order to stay safe while having sex. These ideas are reminiscent of the New York City Department of Health and Mental Hygiene’s guidelines on how to have safe sex during the pandemic, which were used by colleges — including the University of Georgia — to educate students.

“Yeah, there’s no way around it. Let’s just kind of be clear with our families that we could intermix, and we were both really safe, just otherwise,” Randi said. “It just kind of became a thing that we are within each other’s close circle now and we have to understand that and act accordingly.”

As the United States nears its one year anniversary with the COVID-19 pandemic, many Pitt students have encountered a wide array of relationship experiences, from being long distance, quarantining together, breaking up or “dating around.”

Jack Wells, a junior political science major, started dating his girlfriend before the pandemic, and had to resort to long distance when his girlfriend returned to her hometown in New Rochelle, New York, one of the areas hit the hardest by COVID-19. Wells said the spike in COVID-19 cases in New Rochelle made him fearful for his girlfriend and her family’s health.

“I relate back to when the pandemic started, all of a sudden, there is this fear as COVID was spreading through New Rochelle,” Wells said. “It was like, ‘Oh crap, is Alanna going to get it, are her parents gonna get it, is she gonna lose family members?’”

Wells is from Pittsburgh, and he and his girlfriend had to discuss how to see each other while still remaining safe when she returned to Pitt. According to Wells, his girlfriend was staying with some friends, but Wells was living at home at the time and didn’t want to put his family at risk.

“I had to cancel our plans, because I was still living at home with my parents. And if they get COVID it would be a bad time,” Wells said. “So we kind of had to adjust our plans and say like, ‘Look, I have to wait until I’m moved out for us to hang out because I can’t risk getting my parents sick.’”

Wells was not the only person to be concerned about safety while seeing his significant other. Randi said she had to have similar conversations with her boyfriend, whom she started dating during quarantine in March.

“We kind of stopped getting closer to each other for like a month, because we were starting to get scared. We were just confused, we were like, ‘What do we, how do we do this,’” Randi said. “It’s probably the most conversation I’ve ever had about intimacy with a guy in a relationship, simply because of safety.”

Both Randi and her boyfriend were living at home with their parents, and had to take into consideration their families’ health when wanting to have sex. Randi said she had to disclose information about her sex life to her friends and family due to the risk of contracting and spreading COVID-19.

“Everybody needs to know about my sex life because it really does involve so many people,” Randi said. “It’s like the first time in history that your sex life genuinely impacts the health and lives and well being of a bunch of other people and that’s weird, isn’t it?”

Randi added that she felt like a little kid having to ask her parents for permission to see her boyfriend.

Randi was not alone in having to have serious discussions about safety and accountability. Wells faced these difficult conversations as well, and that he and his girlfriend dealt by remaining relaxed and mature.

“Just holding each other accountable, being able to do that and then have a mature discussion and have a relaxed discussion certainly strengthened our relationship,” Wells said. “That’s something that a lot of people could fight about, but like we never did.”

Amanda Forest, an assistant professor of psychology, researches how couples maintain romantic relationships during difficult times, with a focus in communication processes. Forest said research that studies how external stressors — like natural disasters or terrorist attacks — may affect relationships are now being used to study how the COVID-19 pandemic is affecting relationships.

According to Forest, the pandemic creates a host of external stressors, including fear of contracting COVID-19, losing loved ones, job loss or income decreases, all of which can affect a relationship and how partners interact with each other.

Maria Scanga, a sophomore English and GSWS double major, currently lives with her girlfriend, whom she started dating in May. Scanga said she and her girlfriend have experienced mental, financial and school stress.

“We used to spend time together, just to have a good time and make it a fun time,” Scanga said. “But now like a lot of mental health strains, a lot of financial stress, a lot of school stress. It’s really hard for us to back away from all of that and just enjoy ourselves, and just have time together where we’re not thinking about ‘what do we have to do for school?’”

Scanga also said that although these difficulties arise, living with her girlfriend has helped them, as a couple, to communicate and overcome obstacles.

“The one nice thing about living together in a pandemic is when you are fighting you are forced to get over it really quickly,” Scanga said. “Instead of just sitting in your anger and moping about it, you actually are forced to sit down and say ‘Hey let’s stop fighting and talk about this.’”

But for some, the pandemic proved to be too much. Tori Hua, a junior psychology major, started dating her now-ex-boyfriend before quarantine. But once the pandemic began, she said the stress became too great and caused them to break up.

Hua said even if the pandemic didn’t happen, she believes her relationship was still unhealthy, but the pandemic escalated their problems.

Forest said stressors can cause couples to be less responsive to one another, and it is difficult for couples to stop them from affecting their relationship.

“Stressors can cause couples to behave in ways that are more critical of each other, more irritable, to provide less responsive, high-quality support [for] the other at a time when they really might need it,” Forest said. “So sometimes it’s hard for couples to sort of separate the stressors they’re experiencing individually or in their own lives from the relationship and they sort of let the stress kind of spill over.”

Hua also said virus-specific worries caused a lot of tension in her relationship, specifically when her boyfriend contracted COVID-19 and couldn’t work.

“So he just didn’t work for two weeks to quarantine. And he doesn’t have health insurance and I was just like … this is too much,” Hua said. “This is ridiculous.”

According to Wells, he and his girlfriend usually spent time together by talking on FaceTime. Wells said the pandemic gives couples an opportunity to evaluate their relationship and value simple things like FaceTiming.

“Don’t lose sight of the value of just talking to your significant other for like four or five hours straight,” Wells said. “I think this is a good time for people to kind of evaluate and re-evaluate if they’re with someone they really like because our relationship has held strong throughout this pandemic, … and I think that’s told us that we really like each other.”

Scanga also said setting time aside to spend time with your significant other — without technology or school work — is important.

“It’s nice to put everything school-related away and get food and just enjoy eating not with a laptop being open next to you, or being on your phone, like just actually taking the time to talk to each other and see each other,” Scanga said.

Since her breakup, Hua has been reflecting on her relationship. Hua said even if there are stressors affecting a relationship, each person is responsible for their own emotions.

Hua also said to prioritize health over meeting someone new.

“No man or woman is worth risking getting COVID over,” Hua said. “I promise you that.”