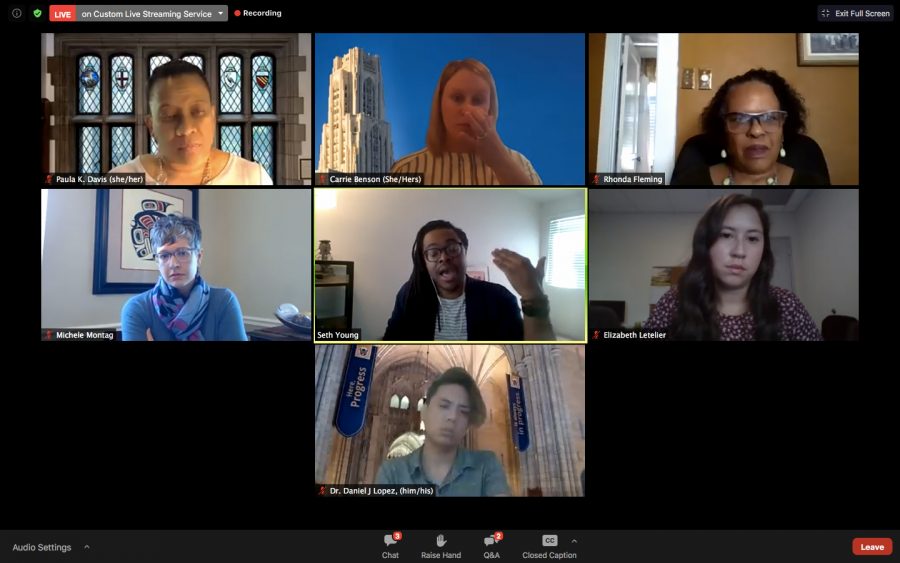 Pitt’s Office of Civil Rights and Title IX hosted an event titled “Violence on the Rise: The Troubled Relationship between COVID-19 and domestic violence” last September, which addressed the increase of domestic violence and sexual violence during the pandemic.

Amidst the uncertainty of the COVID-19 pandemic, intimate partner violence and sexual assault advocate groups remained certain about one thing — helping survivors. Jasmine Rivera said while the pandemic has brought challenges to reporting intimate partner violence and sexual assault crimes, it has not stopped her organization from continuing to offer resources to survivors.

“Whatever our clients need,” Rivera said, “we’re going to do.”

Rivera, the director of victim response at Pittsburgh Action Against Rape, said just because intimate partner violence and sexual assault crimes aren’t being reported, doesn’t mean they aren’t happening. She said sexual assault and intimate partner violence are already underreported and the pandemic has decreased access to mandated reporters, like schools and hospitals, especially during Pennsylvania’s stay-at-home order.

“When you go to the hospital, and they ask you specific questions, that’s one of the places where you can report this type of violence,” Rivera said. “But now, people aren’t going to the doctor’s office.”

Rivera said despite high-stress situations like the pandemic, which usually lead to an increase in the frequency of IPV and sexual assault, reporting of these crimes has actually gone down.

“We were all expecting an influx of increased reporting about intimate partner violence, as well as sexual assault,” Rivera said. “However, we saw the opposite.”

Janice Goldsborough, the medical advocacy coordinator at the Women’s Center and Shelter of Greater Pittsburgh, said the organization had an immediate 30% decrease in calls to its hotline at the beginning of the stay-at-home order compared to prior years. Goldsborough said while numbers are now remaining steady, the pandemic has brought a new level of financial insecurity and uncertainty, making it difficult for victims to seek help in the same ways they previously could.

Dr. Maya Ragavan, an assistant professor of pediatrics at Pitt, said the pandemic itself is not the only thing bringing difficulty upon survivors. She said marginalized communities who have experienced long-standing structural inequities experience IPV in a different way, since racist and xenophobic practices, like using documentation against survivors, are often used to have control over survivors.

“That has predated the pandemic,” Ragavan said. “But the pandemic has compounded and added an additional layer of stress.”

Rivera said even without the pandemic, communities of color may also feel unsafe reporting to the police, which could also be contributing to a decrease in reports.

“When it comes to reporting to police, you’re going to have populations, especially in the Black and brown community, that already have a distrust of the police, that would be afraid to report to the police even without having a pandemic in place,” Rivera said.

Ragavan, along with her colleagues at Pitt, is currently working on a research study focusing on dating and domestic violence prevention. The study, funded by the Centers for Disease Control and Prevention and in collaboration with the American Academy of Pediatrics, Futures Without Violence and a colleague at Children’s Mercy in Kansas City, involves interviewing 53 IPV advocates, those who work with victims and have “advanced training and knowledge on intimate partner violence.”

Ragavan said when analyzing the data from the virtual interviews, she found that abusers are finding new ways to control victims, like taking survivors’ stimulus checks.

“IPV is very much rooted in power and control,” Ragavan said. “So a lot of IPV is using physical violence, sexual violence, emotional, financial, immigration status, reproductive health, to control the survivor.”

Students can contact the Office of Civil Rights and Title IX through email at [email protected], phone at 412-648-7860 or by submitting an anonymous online report. They can also contact the University Counseling Center for 24/7 support by calling 412-648-7930.

Benson said the Title IX office is aware of the effects the pandemic has been having on IPV frequency, especially in the Pitt community.

“Not all community members who are sheltering in place are doing so in a safe home,” Benson said. “We recognize that members of our own community may be forced to spend time in environments that are not healthy to their emotional or mental wellbeing—and may even be abusive.”

The office hosted an event titled “Violence on the Rise: The Troubled Relationship between COVID-19 and domestic violence” last September, which addressed the increase of domestic violence and sexual violence during the pandemic. Benson said the Sexual Violence Prevention and Education Office is currently piloting a Survivor Support Network, where members are trained and knowledgeable about campus and community resources, and “are committed to supporting students and peers who have been affected by sexual misconduct.”

“Sexual violence prevention and education training continues to be offered to students, staff and faculty during the pandemic,” Benson said. “This training is typically offered through Zoom and includes discussions about technology, with regard to relationships, in the era of COVID-19.”

Benson said Pitt’s It’s On Us campaign is offering trauma-informed and survivor-focused training sessions with SETpoint regarding situational awareness and boundary setting next Tuesday.

While the pandemic has brought barriers to the IPV and sexual assault reporting process, Goldsborough said the Women’s Center and Shelter has “not had to deny a service to a client because of COVID.” The center has continued to offer resources, like shelter for survivors, connections to food banks and gift cards to pharmacies, groceries and Uber, while also implementing new resources, like a 24-hour text/chat hotline for survivors who may not have the privacy to make a phone call.

Rivera said PAAR also is offering a 24-hour text/chat hotline, as well as telehealth counseling services for survivors, and is focusing on utilizing social media to make themselves available to survivors during the pandemic. She said while PAAR has been successful in creating virtual resources, she hopes in-person services can soon be utilized more.

“In my opinion I feel like, although we were still providing a service, I don’t think it was as beneficial,” Rivera said. “Sometimes I think that in-person contact really makes a difference especially in a situation where someone’s experienced sexual assault.”

Ragavan’s study is currently in the peer-review process, but once published, she hopes it will not only provide information on the topic of domestic violence and sexual assault, but promote the inclusion of IPV when creating future natural disaster and even pandemic response plans.

“One of our big hopes is that we really think about IPV when we’re putting together disaster preparedness plans,” Ragavan said.

Ragavan also said she hopes the study erases the “Why don’t they just leave?” narrative, and instead encourages focusing on the survivor’s needs.

“I think it’s important to show your concern, provide resources, but remember that forcing someone to leave an abusive relationship can be very harmful and it’s taking control away again,” Ragavan said. “So really thinking about keeping things survivor-centered.”

Even with the hardships that the pandemic has brought, Rivera said the focus at PAAR will always revolve around helping those in need and continue to offer resources no matter the circumstances.

“For us,” Rivera said, “it’s going to be making sure that people know, when they’re ready to contact us, that we’re here.”