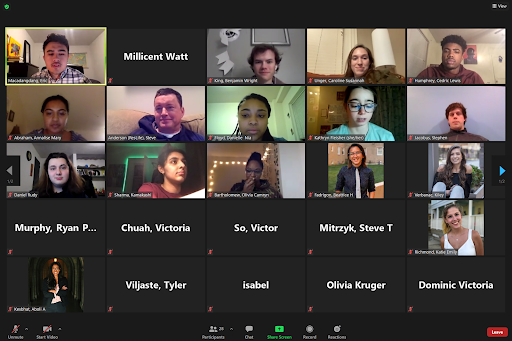 With 15 students running for Pitt’s Student Government Board — 12 for board positions and three for president — current SGB president Eric Macadangdang said the number of students running is a sign of a bright future for the board.

“These are numbers that I personally have never seen at my time at Pitt in SGB,” Macadangdang said. “What I think this means is that we have some students who are excited and ready to help lead the student body forward into next year.”

SGB voted Tuesday evening to approve a referendum which would put proposed changes to the board’s constitution on the upcoming March 2 elections ballot. These proposed changes consist of adjusting the vice president positions, adding a diversity and inclusion statement and clarifying part-time student status.

According to Cedric Humphrey, executive vice president, the Civic Engagement Hub is working on completing its proposal, which will hopefully be finished this week.

Arvin Sequeira, civics engagement hub fellow, said the Hub reached out to key stakeholders, including the University Honors College, the Office of Cross Cultural & Leadership Development and the Office of Diversity, Equity and Inclusion, to discuss future initiatives.

Fleisher said the meeting would be to urge Pitt to become an example for other universities and implement police misconduct databases.

“We are trying to get the University not only to commit to the legal bare minimum, but also to go above and beyond in this area and be an example to other colleges and universities in terms of utilizing police misconduct databases in hiring and reporting to those who can make that transparent to the rest of the community,” Fleisher said.

Beatrice Fadrigon, chair of SGB’s diversity and inclusion committee, said the University is hosting many programs in honor of Black History Month, including SGB’s “What The F*ck?” event this Thursday which will focus on white supremacy, how Pitt may perpetuate it and how Pitt can fight against it.

Olivia Bartholomew, the chair of SGB’s elections committee, said she urges non-SGB students to vote on March 2, and be aware of who they are voting for.

“It’s really important that you’re aware of who you’re voting for because if you’re having an issue at Pitt, these nine people are elected for a reason, to help you solve these issues,” Bartholomew said.

Bartholomew announced a Meet the Candidates event on Feb. 17, at 8:30 p.m., and the Presidential Debate on Feb. 25, at 8:30 p.m. Bartholomew also said a new URL will be used for the election, at pi.tt/sgbelections, and the board will release new information about the election soon on SGB’s website.

SGB member Annalise Abraham said the Board of Trustees’ Ad-Hoc Committee on Fossil Fuels has submitted its report studying whether the University should divest its $4.3 billion endowment of fossil fuel investments. Abraham said although the decision is up to the board chair, she wishes the process was more transparent to the public.

“I understand that it is up to the chair to decide the steps forward from here, but I would really like to emphasize the need for greater transparency around the committee process, and for the board to make its reports, or the committee’s report, public as soon as possible,” Abraham said.

In his closing remarks, Macadangdang urged students to register for the “What The F*ck?” Event, to fill out the COVID-19 Medical Response Office vaccine survey and to remain vigilant about safety precautions as students end their shelter-in-place period on Feb. 15.

Macadangdang said students can contact SGB via its Fix it Pitt! form, SGB office hours or during public meetings, so the board can better represent Pitt’s student body.

“A well-connected Student Government Board means that we can better represent you and your needs, so please do not hesitate to reach out,” Macadangdang said.

The allocations committee received four requests for a total of $9,180.04. The committee approved $3,494.04. One request required board member approval.

Pitt’s Active Mind’s Club requested $3,000 to fund its Movies For Mental Health program. The board approved in full.