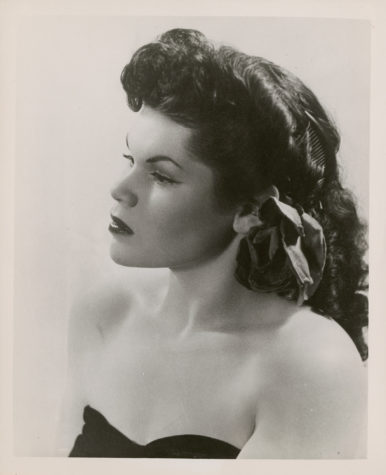 The Warhol Museum is currently honoring Tally Brown, a singer and actress of the New York underground performance scene of the ’60s and ’70s, and her affiliation with Warhol with an exhibit that runs through October.

Long, voluminous curls of a black wig cascade down the shoulders of a mannequin while operatic singing plays loudly in the background on the sixth floor of the Andy Warhol Museum.

The wig belonged to Tally Brown, singer and actress of the New York underground performance scene of the ’60s and ’70s. The Warhol Museum is currently honoring Brown’s legacy and her affiliation with Warhol with an exhibit that runs through October.

The exhibit features videos of Brown’s performances, photos, album covers, sheet music, portraits, playbills, wigs and some of Brown’s other belongings. It is located on the sixth floor of the Warhol, in a chronological layout where the sixth floor represents the ’60s.

In her musical career, Brown released one album and covered songs by David Bowie and The Rolling Stones. Additionally, director Rosa von Praunheim documented her career in his award-winning documentary “Tally Brown, New York.” According to the museum’s website, Brown was one of Warhol’s “Superstars,” and was featured in a few films that Warhol created in his New York studio, the Factory, in the mid-’60s.

According to Greg Pierce, associate curator of film and video at the museum, Brown first ended up in one of Warhol’s films unintentionally.

“On her first visit to the Factory, she fell asleep on Warhol’s famous red couch, which is in a million Warhol films various ways,” Pierce said. “She woke up and found that there was a camera pointed at her, and she ended up being featured in a film called ‘Batman Dracula.’”

Along with singing and starring in movies, Brown also lent her talents to Broadway shows and cabaret clubs, according to Pierce.

“She was in the Broadway musical ‘Pajama Game,’ and in off-Broadway productions of ‘Mame’ and ‘Medea,’” Pierce said. “She also performed cabaret acts in Reno Sweeney’s, a famous club in New York.”

According to Alex Taylor, assistant professor in Pitt’s history of art and architecture department, Brown isn’t one of the most recognizable people affiliated with Warhol.

“Tally is far from the most famous member of the Factory, and she’s not typically one of the famous names that are associated with Warhol’s films of the mid to late ’60s,” Taylor said.

Even though she’s less well known than other artists involved with Warhol, Brown had an expansive career of her own that reached far beyond her involvement with Warhol, according to Taylor.

“Lots of people were kind of unknown before Warhol gave them their 15 minutes of fame,” Taylor said. “She was part of his scene, but what I think is really interesting is that she had a career before him, and her contributions to the field extend beyond her association with Warhol.”

Part of this career was co-founding one of the first fully integrated schools in the American South. This school, the Fine Arts Conservatory, opened in 1951 in Miami. According to Taylor, this was a hugely influential opening.

“The thing that strikes me as really interesting about this is, you know, this was a school that was desegregated before Brown v. Board of Education,” Taylor said. “For Tally, it was really a pioneering step.”

Brown founded the conservatory with Ruth Greenfield. According to Jose Diaz, chief curator at the Warhol, Greenfield’s son, documentary filmmaker Timothy Greenfield-Sanders, inherited Brown’s belongings and recently donated them to the museum.

“Timothy Greenfield-Sanders had reached out to the directors and curators before my time at the museum,” Diaz said. “Then, a gift was made, and we acquired all of the archival things related to Tally Brown.”

Brown’s current exhibit stemmed from a larger exhibition called “Femme Touch.” According to Pierce, the exhibition focused on the women involved with Warhol’s life and artwork.

“The concept behind the exhibition was to shine light on women who were influential to Warhol,” Pierce said. “It was to showcase them as intelligent and creative women where, in a lot of instances, he actually stole ideas from them.”

Shining a light on other artists who worked with Warhol helps preserve their legacy. According to Taylor, Warhol’s persona tended to outweigh the personalities of the artists that he worked with.

“Warhol has a habit of overshadowing everyone around him,” Taylor said. “Some of the artists and performers that are associated with the Factory kind of ended up resenting him in some ways because of it.”

According to Diaz, this is the first time that a museum is honoring Brown’s life and career.

“We have all this stuff of Tally’s that has never been exhibited before, so it really is the first time that a public-facing institution is telling her story,” Diaz said. “We’re constantly striving to introduce Pittsburgh to new artists.”

Diaz said he thinks it’s important that the museum highlights the people who were involved with Warhol.

“Everyone has some sense of who Andy Warhol was and what he created,” Diaz said. “But it’s really important for us to flesh out the stories of other exceptionally creative individuals that were part of his universe.”

Pierce also said he believes that understanding the historical impact of people like Brown is one of the most important things the museum can do, instead of just focusing on Warhol.

“It’s such an important thing for a museum like us to do with people who are underappreciated,” Pierce said. “It’s not just us focusing on Warhol’s brand, but it’s us really focusing on Tally as a person and I think it’s pretty fascinating.”