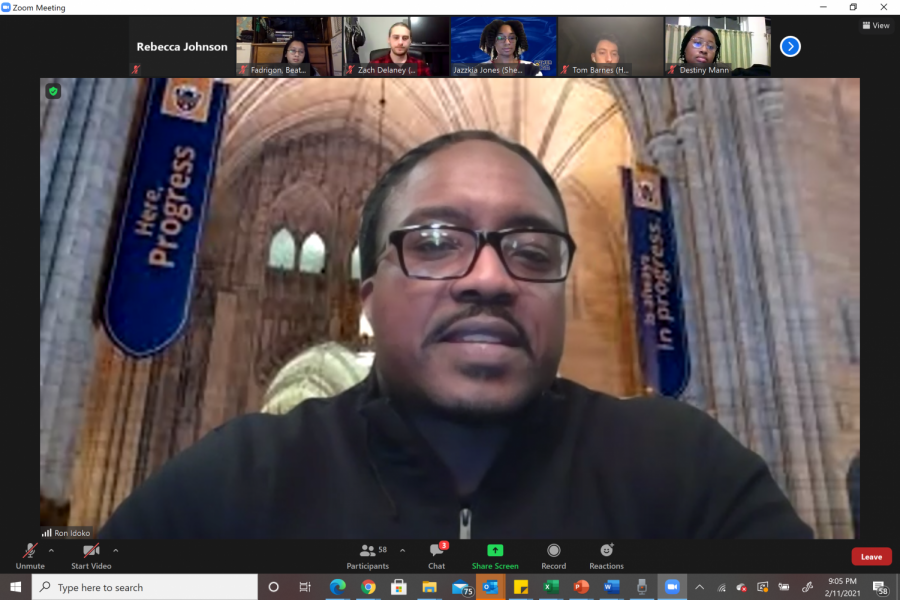 When Destiny Mann sat in on a diversity training recently, she said her thoughts quickly shifted to her mother.

“They were like, ‘Oh my race has never affected me.’ Being white in America that’s just not true, and I tried to give the example of education,” Mann, a junior Africana Studies and political science double major said. “They were saying they didn’t have access to a lot of opportunities and they really had to work to get to college, which I completely acknowledge. But it’s the idea that it probably was easier because you were white at the end of the day, and they weren’t understanding it.”

Mann was one of the speakers at Thursday evening’s panel, “What the F*ck? Unfiltered Conversations About Diversity and Inclusion Between Students, Staff and Administration.” The panel — hosted by Student Government Board and the Office of Equity, Diversity and Inclusion — also included students Jazzkia Jones and Zach Delaney as well as Ron Idoko from OEDI. Bea Fadrigon, chair of SGB’s diversity and inclusion committee, moderated the discussion.

Mann added that one of the takeaways she got from that training is that people need to think more critically about white privilege and white supremacy.

“People aren’t understanding that you have to think critically. White supremacy is embedded in every aspect of society,” Mann said. “It’s no longer just the aggressive saying the N-word. We need people to start thinking more critically about what whiteness and white privilege is and what supremacy is.”

Jones, a graduate student in the School of Education, also said white supremacy often manifests in education, including at Pitt. Jones recounted an interaction she had had with another student organization on campus. Jones, who is the vice president of internal affairs for the Pan-African Graduate and Professional Student Association, said her organization had a “traumatizing” conversation about who it represents.

“One of the questions asked was why did we decide to include the Caribbeans and the West Indies in our definition as Black. We became a little confused, because we were like, ‘What do you mean why did we include? Black people exist there,’” Jones said. “There are Black people across the entire globe. Every country basically has Black people.”

Idoko, the diversity and multicultural program manager for OEDI, said his office is working to alleviate some of these problems on campus. He said OEDI focuses on educating people on racism and implicit biases, as well as having conversations about equity.

But Mann said this isn’t nearly enough. She said the University needs to invest more money, resources and staff into addressing racism on campus. Mann added that this includes expanding OEDI to create a department to specifically “handle race issues” and cutting off donors that don’t align with Pitt’s messaging surrounding diversity and inclusion.

“It’s up to Pitt. If you’re going to say that you’re a university of diversity, equity and inclusion, then don’t pay money to donors who don’t believe in that,” Mann said. “Put your money where your mouth is.”

Mann also referenced the demands that BAS and 17 other Black student orgs made to Pitt over the summer. The wide-ranging list of more than 20 demands touched on topics including amplifying the Black student voice, increasing the number of Black students and faculty, curriculum changes, additional training for employees and Pitt police reforms. Pitt met many of these demands in its Anti-racism, Diversity and Inclusion Action Plan, although it said it wasn’t a formal response to the demands.

“I feel like Pitt is constantly dropping the ball when it comes to Black trauma. When there’s shooting after shooting, the fact that my professors expect me to take exams, to do readings, no one really talks about everything,” Mann said. “I know that Pitt is trying to address this more after you know everything that happened over the summer. But at the end of the day, the Senate … we took it upon ourselves to create a list of demands for the University to kind of get themselves together.”

Jones added that Pitt can’t “transform” if it’s “only a one department job.” She said nothing will change if there isn’t systemic action that challenges white supremacy.

“While I do agree with creating task forces, creating departments … I think the resources should be in challenging thinking, and not just cutting off donors but cutting off faculty, cutting off staff, cutting off students,” Jones said. “If we are really trying to say that we are no longer accepting white supremacy, we are transforming this institution, we are seriously dedicating ourselves to equity and inclusion, it has to be more than just a one-man show.”

As far as actions Pitt is taking to address some of these issues, Idoko said the University has “activities” and “initiatives” forthcoming. Idoko also mentioned Pitt’s new Anti-Black Racism: History, Ideology and Resistance class that the University required for first-year students for the first time last fall. He said this class was a step in creating a “shared understanding” of structural racism and anti-Black racism.

Idoko added that OEDI has also developed a new anti-racism training that is meant to develop “diversity consciousness.” He said a cohort model of this training will be available to everyone on campus in March.

Not all audience members were entirely receptive to Idoko’s message though. Tom Barnes, a first-year student, said the anti-Black racism class has a long way to go to be entirely effective. He said the content is “great” and “educational,” but since the class isn’t taught synchronously, it’s difficult for all students to fully engage in the material.

“There was this giant issue of everyone just finding answers and inputting the answers to the quizzes that sequence the course. You’re not watching the lecture, no one’s absorbing the information,” Barnes said. “All they’re doing is texting their friend, ‘Hey what’s the answer for the anti-Black racism class this week.’”

Prem Rajgopal, a 2020 Pitt alumnus, asked how the University could “dismantle white supremacy” when its leadership is overwhelmingly white and cis-male. He also criticized a “Policing in Pittsburgh” panel that OEDI sponsored last Thursday alongside the School of Pharmacy Program Evaluation and Research Unit and the Office of Health Sciences Diversity, Equity and Inclusion.

“I don’t think the Office of Diversity and Inclusion should be facilitating discussion with police,” Rajgopal said. “The only type of panel discussion I would like and be interested in seeing about police is one about police abolition.”

Idoko said in response that Pitt is “working to ensure representation is key.” He said the University recently hired more senior administrators who are minorities, and that while Pitt “can always do better,” he wanted to acknowledge that “advancements had been made.”

Jones added that getting rid of white supremacy at Pitt means rethinking power relations and hierarchy.

“No one wants to think about an institution functioning without a hierarchy of systems, but organizers in the community, especially Black women organizers, talk about a communal leadership structure that works and that functions,” Jones said. “And we might not be able to conceptualize that just yet because we’ve never seen it, but it doesn’t mean that we can’t begin to think that way.”