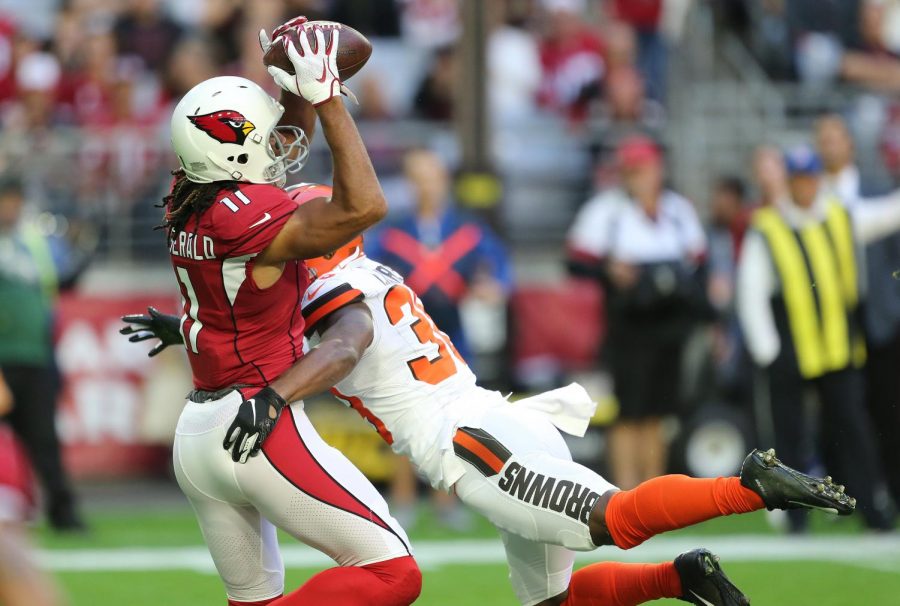 Arizona Cardinals wide receiver Larry Fitzgerald hauls in a first-down reception as he is hit by Cleveland Browns defensive back T.J. Carrie in the first quarter, Dec. 15, 2019, at State Farm Stadium.

Between the beloved Steelers, one of the most storied franchises in all of sports, and the incredible football talents like Aaron Donald and Tyler Boyd that come out of the area, Pittsburgh is clearly a football town. A football town isn’t complete without a college-level program, which has culminated in Pitt’s identity as a “football school.”

The first season of Pitt football dates all the way back to 1890, when Pitt was known as the Western University of Pennsylvania, making it one of the oldest athletic programs at the University. Over its more than 130-year history, the program has found a lot of success on both team and individual levels. Pitt has racked up nine national championships and also gained wins in big postseason appearances such as the Rose, Fiesta, Sun, Gator and Sugar Bowls.

Players who have thrived at Pitt have gone on to have excellent NFL careers as well. The Panthers have rostered 93 first-team All-American selections, with defensive end Rashad Weaver becoming the most recent selection following his spectacular 2020 performance.

With just these numbers alone, the football program makes its claim as the top athletic program at Pitt. With such a long history and so many team and individual achievements, Pitt clearly qualifies as a football school.

One can make the argument that the Pitt football program has not seen the same level of success recently that it had in the past, and there’s truth to this statement. But the same could be said about the basketball program.

Neither has done anything significant in postseason play in more than a decade. The basketball program last reached the Elite Eight in 2009, and has only once reached the Final Four, way back in 1941.

Other programs at Pitt, such as soccer and volleyball, have seen quite a bit of success recently, but they do not have the history that the football program has, or even that of the basketball program.

The soccer program began as a club team back in 1951, and eventually gained the status of a varsity team in 1954. The program hasn’t prospered until recently, earning its first NCAA Tournament appearance since 1965 last year.

The volleyball program started even more recently, beginning in 1974. It has found lots of success over the last few years, reaching the tournament every season since 2016 and finding itself ranked for almost the entirety of the last two years. But this success is newfound, not something over a long period of time that has earned Pitt a national reputation.

While both of these programs have started to see a lot of success, they do not have enough history to overtake football, which means Pitt can’t be a volleyball or soccer school.

As long as the Panther football program continues to compete at a high level and continues to produce NFL talent, Pitt will always be a football school.