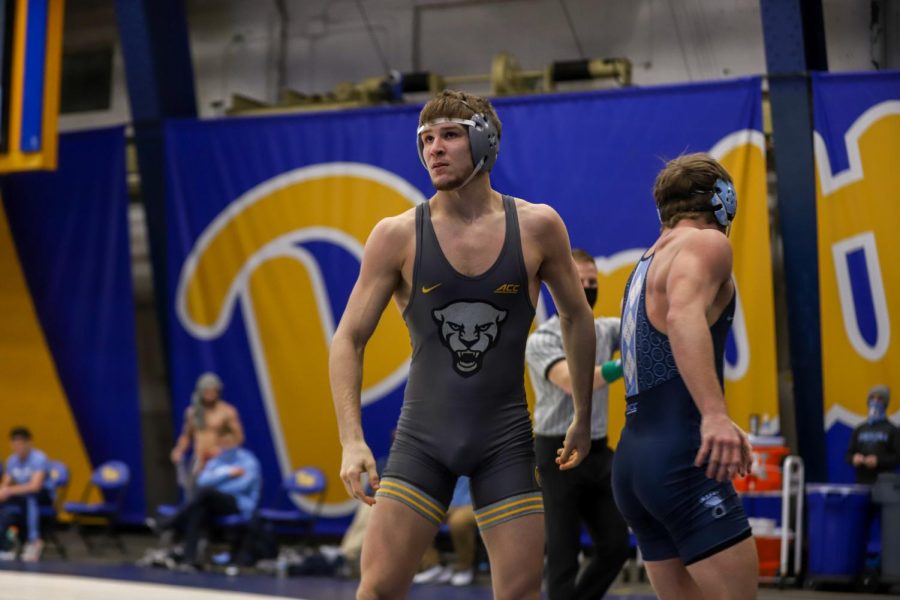 Pitt wrestling fell to Virginia Tech 27-12, finishing the shortened season at 3-4 overall and 1-4 in conference.

By Jason Glancy, For The Pitt News

Pitt’s weekend in athletics saw cancellations in softball and soccer. However, the weekend was not without its standout performances. Wrestling’s Jake Wentzel and track and field’s Evan Addison and Greg Lauray did Pitt sports proud.

Much like last weekend’s match against UNC, Pitt wrestling’s individual performances were not enough to push the team to a win against Virginia Tech. Pitt fell to Virginia Tech 27-12, finishing the shortened season at 3-4 overall and 1-4 in conference.

Pitt senior Jake Wentzel was stellar in his marquee matchup against the redshirt sophomore Mekhi Lewis, who is currently ranked No. 1 in the country. Wentzel ended up winning against his top-ranked opponent via injury default.

Next up for Pitt is the ACC wrestling championship, which NC State will host on Feb. 28.

The Panthers headed down to Clemson, South Carolina, this weekend for the Tiger Paw Invitational. In track events, the Panthers qualified for the finals in the 60m dash, 60m hurdles, 200m dash, 400m dash, 800m dash and 1-mile run.

But the highlight of the meet came with the men’s mile mile, when Pitt took three of the top five spots, including first. Addison, a junior, finished first with a time of 4:04.08. Senior Josh Higgins did not finish far behind in third place with a time of 4:06.44.

Sophomore Jack Miller rounded out the top five with a 4:07. The Pitt women were also successful in the mile, taking two of the top 10 spots. Senior Ally Brunton took fifth with a 4:51.54 while first-year Emily Brown took eighth with a 5:01.79.

Both teams turned in strong performances in the high jump. Lauray, a senior, took first place with a 2.16m jump for the men. In the women’s high jump, senior Breanna Phillips tied for eighth place with a jump of 1.62m.

Pitt will meet at Virginia Tech next weekend for its final meet before the ACC indoor championship.

Pitt softball headed down to Florida for the start of its 2021 spring season this weekend. The Panthers opened the year with back-to-back games against Liberty and New Mexico State.

Pitt dropped game one against Liberty 4-10. Despite a late push by the Panthers, outscoring Liberty over the final three innings of the game, it was not enough to outdo the lopsided first and fourth innings. Pitt ended the game with five errors to Liberty’s zero.

The Panthers played a much more disciplined game versus New Mexico State with only two errors, but another slow start proved too great to overcome. Pitt ended up dropping the game 6-3, falling to 0-2 overall.

Pitt was scheduled to play two more games the next day, one against Liberty again and one against Middle Tennessee, but both of those games were cancelled due to weather. Pitt begins ACC play against Duke on Thursday.

Pitt women’s gymnastics met at the Fitzgerald Field House this Sunday for a meet against 0-7 Temple. This was the first meet Pitt wore its custom Black Lives Matter leotards in honor of Black History Month.

Pitt ended the meet with a better score on vault and bars, but Temple took the advantage on the beam and the floor. The Panthers ended up tying Temple with a score of 194.525 each. Pitt’s next meet will be a quad at Towson on Friday.

Pitt men’s soccer was supposed to participate in an exhibition versus Georgetown this weekend, but potential COVID-19 cases within the Georgetown program cancelled the game. No future date was set for the match. The Panthers’ next outing will be against Akron on Feb. 20.