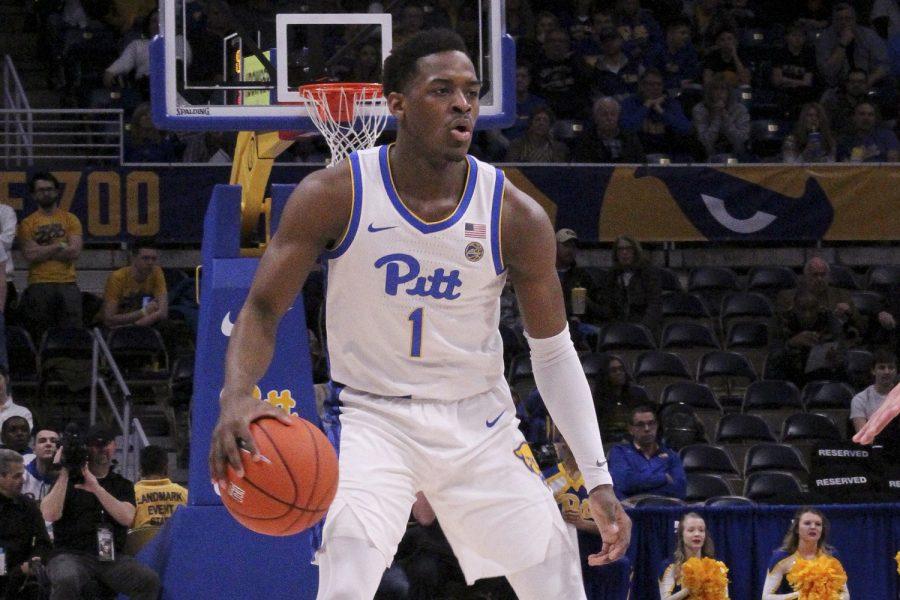 The Panthers returned to the court on Sunday afternoon to play Georgia Tech after a COVID-induced postponement that kept them out of game action for six days. With the bitter taste of a blown-lead-turned-loss against Virginia still in their mouths, Pitt came out of the gates strong offensively.

A late rally from Pitt (9-7 overall, 5-5 ACC) was not enough to overcome its own sloppy play in a 71-65 loss to Georgia Tech (10-8 overall, 6-6 ACC) on Sunday night in Atlanta. Pitt’s 18 turnovers and lowly 53% shooting from the free throw line proved fatal in the second half as the Panthers dropped their second game in a row since upsetting No. 16 Virginia Tech.

The Yellow Jackets, who lead the ACC in steals, pressured Panther ball-handlers early and often. Redshirt sophomore guard Ithiel Horton said Pitt knew what kind of challenge its defense would present, but was unable to execute against it.

“Coach kept reiterating how we had to be really strong with the ball, step through passes, fight for our position because they’re a very physical team,” Horton said. “We always work on V-cuts, getting open to the ball. But [tonight] we just couldn’t do what we needed to do.”

Head coach Jeff Capel said he wanted to see his players drive more and get shots at the rim, but Georgia Tech’s ability to defend without fouling made that difficult. He and Horton were both diplomatic with their words during the postgame press conference, but clearly took issue with how the game was called.

When asked how the Yellow Jackets were able to keep his players out of the paint, Capel gave vague praise to Georgia Tech and condemned his squad, but also alluded to the displeasure with the officials he displayed throughout the night.

“They did a good job of stealing the basketball. We were careless,” Capel said. “I would have liked to have gotten to the foul line a little bit more. We drove it, trying to draw some contact. But I guess they teach their guys greatly not to foul.”

The Panthers lept to an early 11-6 lead in the opening half after making five of their first seven shots from the floor. Possessions were few and far between throughout the first period, making every point crucial. In a game as low-scoring as the one Pitt and Georgia Tech played on Sunday afternoon, scoring runs of as little as six or seven to nothing can completely change the complexion of the game.

Pitt built its early advantage with a 7-2 burst that lasted just 1:16. The Panthers executed good offense but were unable to knock down many shots through the game’s opening minutes. Instead, their own stout defense fueled the Panthers’ success, holding Georgia Tech to just 43% shooting from the field and 27% on 3-pointers and allowing the Panthers to gain separation.

The visitors led 13-8 with an even 14 minutes left in the first half after junior guard Xavier Johnson made a pair of free throws. From then on, neither team would score for more than three minutes.

Pitt let the Yellow Jackets stay within striking difference, and Georgia Tech repaid the favor with a 12-2 run spanning four and a half minutes that deflated the Panthers and left them trailing for the first time all afternoon. Pitt mustered only two more points over the final four minutes of the period and upon entering halftime in a 31-22 hole, appeared deeply deflated.

Tech rode the dominant inside presence of senior forward Moses Wright, who was a handful for Pitt’s bigs. He played off of his team’s veteran guards expertly and scored a game-high 24 points.

The second half, however, was a different story.

Horton and junior forward Au’Diese Toney came out firing in the second period. The duo combined to make three 3-pointers and score 16 points through the first eight minutes of the half.

Horton finished with 18 points on 4-8 shooting on 3-pointers. The key to his strong shooting was simply confidence, according to Capel.

“He played well,” Capel said. “Made some shots, got into a rhythm there. Ithiel is a good player and we need him to believe all the time that he’s a good player.”

Eventually, a 9-0 run — capped by a circus shot layup from Toney, then a steal and score from junior guard Xavier Johnson — tied the game at 55 with 4:36 remaining in the game. But Pitt was unable to secure stops down the stretch, and Georgia Tech’s free throw shooting closed the door on any comeback. The Yellow Jackets made their final 10 free throws inside of four minutes left in the game to seal the deal.

Toney was also outstanding offensively, with 15 points and nine rebounds for Pitt. The stalwart backcourt duo of senior Jose Alvarado and junior Michael Devoe were once again steady for the Yellow Jackets. They combined for 25 points, 11 rebounds and eight assists in the win.

Pitt has now dropped two games since upsetting then-No. 16 Virginia Tech at the Pete last weekend. Now the Panthers will return home with another vulnerable ACC team in their sights. They will welcome NC State, fresh off of a 69-53 loss to Duke on Saturday night, for a 4:30 p.m. matinee on Wednesday.